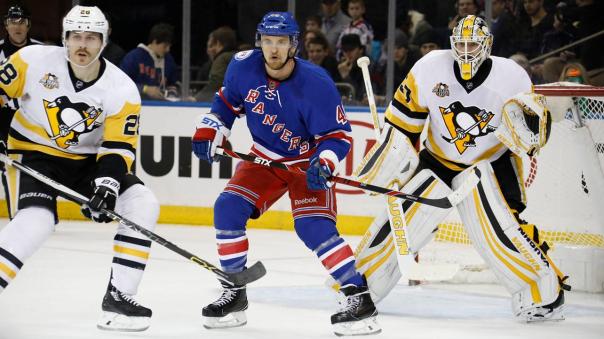 This was a disgrace.

Playing their fourth game in six nights, the Rangers (14-6-1) dropped their third game in four contests as the Penguins (12-5-3) cruised to a dominating 6-1 victory, outshooting New York 38-17 in a completely one-sided contest.

Sometimes teams get fatigued, but this was a whole new level of bad for the Rangers. There was a point in which the Penguins outshot the Rangers 19-0 over a span of nearly 20 minutes. While the Penguins completely dominated possession and had countless scoring chances, the Rangers did almost nothing for the last 40 minutes.

There have been a few concerning performances recently, with the Rangers either losing because they get outshot and out possessed, or when the sneak away with a win thanks to a high shooting percentage. Games like tonight, and some of the others recently, kind of show that when the offense isn’t clicking, the defense can’t hold down the fort. That’s concerning.

It didn’t take long for the Rangers to get on the board, with Rick Nash scoring his ninth goal of the season, this time on the power play. After winning the faceoff, Mats Zuccarello fired a quick shot on goal that was saved. With Chris Kreider fighting in front of the net, Nash was able to get the puck and deke around Matt Murray and into the back of the net.

Later in the period, Ryan McDonagh and Sidney Crosby got into a bit of a scuffle after McDonagh hit Conor Sheary from behind. It was a dirty hit, but it looked to be embellished a bit and was not worthy of a five minute major in my opinion. Crosby was giving two minutes for roughing but surprisingly no instigator call. The Rangers were able to kill off the Penguins’ three minute penalty kill, a huge moment in the first period.

Pittsburgh was able to survive a late onslaught by the Rangers as they poured on the pressure in the dying minutes, with Murray making at least three good saves in the last 45 seconds, including robbing Nick Holden of a goal. After an extremely fast paced first period with lots of chances and good goaltending, the Rangers led 1-0 with a 10-7 edge in shots on goal.

While the first period was solid for the Rangers, the second period was an absolute disgrace. There was legitimately nothing positive that I can pull from that period. The Rangers were outshot 14-3, had absolutely no possession or chances, and gave up FIVE goals. Lundqvist wasn’t great but you really can’t fault him for this one. The goals came off of bad coverage, crazy deflections and wide open skaters.

Scott Wilson scored the first goal this period just two minutes into the period, converting on a perfect Phil Kessel feed after he was left wide open in front of the net for a tap in. Sidney Crosby scored on a redirection after Staal and Zuccarello could not clear the puck. Phil Kessel scored next on a spectacular wrist shot, skating through Staal and Holden like they weren’t there and firing it over Lundqvist’s glove.

Sidney Crosby’ second goal of the night came just two minutes later, taking a bizarre deflection off of McDonagh’s stick and past Lundqvist. That would be all for him, as Antti Raanta came in to play. Lundqvist finished with 13 saves on 17 shots. Raanta would give up a goal to Conor Sheary a few minutes later, with the Penguins keeping the puck in the Rangers’ zone for 96 seconds at even strength, they took a 5-1 lead into the locker room.

The third period actually found a way to be worse. The Rangers didn’t get a shot on goal for about 15 minutes, and still wound up being constantly pinned back in their own zone while having no offense to show for it. Pittsburgh had 17 shots on goal despite already winning in a blowout, which speaks to how bad the defense was.

Not much to say here. If you’re the Rangers, forget this and move on. The next game is Friday afternoon in Philadelphia against the Flyers.