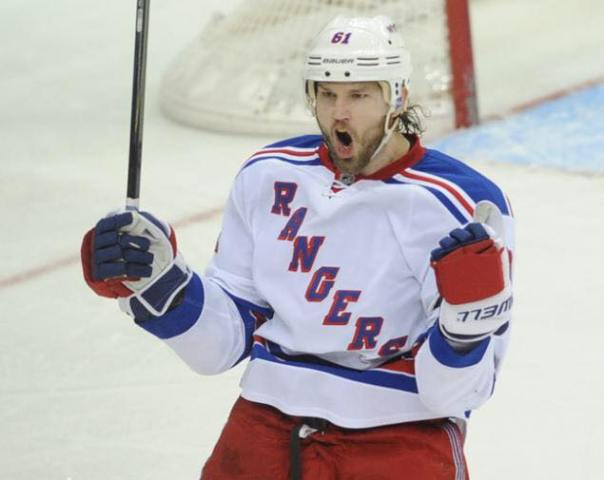 Rick Nash with a great game in the season opener, scoring 2 goals and tallying and assist.

The Rangers began the 2014-2015 with a victory in a surprisingly chippy game against a St. Louis team that won 52 games last year. New York won on a late goal in the third period by Rick Nash, who also scored another goal in the first period and assisted on Kreider’s goal in the third.

The Rangers came out firing on all cylinders. The first period was dominated by New York. They had twice as many shots as St. Louis, and skaters all over the ice were blocking shots and using the stick effectively, by making timely poke checks and deflecting shots from the Blues. St. Louis had just two shots at the nine minute mark of the first period.

Rick Nash opened up the scoring just over four minutes into the game, but Chris Kreider deserves just as much credit as Nash on the goal. After a Nash wrister was blocked and collected by Blues’ defensemen, Kreider came up from behind him and poked it away, then slid the puck across to Nash who buried past Blues’ goaltender Bryan Elliot. 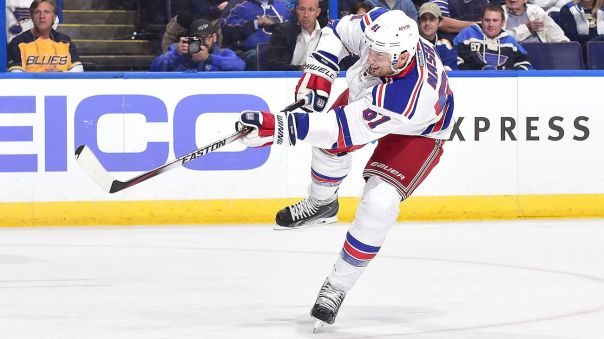 Another player who stood out was rookie Anthony Duclair. Although he did not register any points, Duclair showed his speed by flying past defenders, and made some nice passes and plays as well as getting the puck on net.

St. Louis was also shut down on their lone power play opportunity in the period, not even registering a shot. St. Louis would go 0-for-5 on the power play for the night.

At the end of the first, New York led on shots with 16 to the Blues’ 8 shots.

In the second period, St. Louis showed why they were a contender in the Western Conference last year.

In a period that saw a total of 18 penalty minutes handed out, the Blues’ dominated play for most of the period. With the Rangers killing penalties for a majority of the 20 minutes, they seemed to have lost their offensive flow they had in the first period, finishing with only 4 shots in the second.

The game became even more intense after a knee-to-knee collision between Dan Girardi and newly acquired Paul Statsny of St. Louis. Statsny limped off the ice, but would rejoin the team in the third period.

Henrik Lundqvist looked especially solid in the second period, making some key saves while the Blues’ were on the powerplay, most notably a glove save on Vladimir Tarasenko at about the 5 minute mark. He finished with 23 saves in the game. 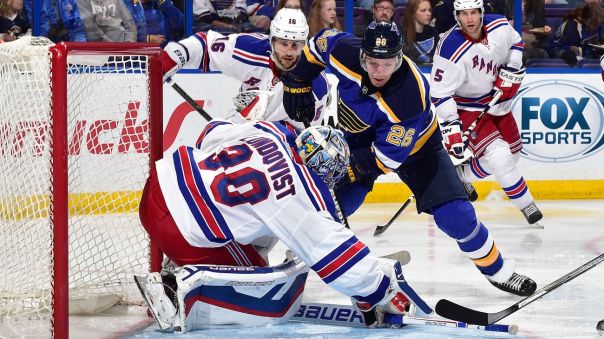 Henrik Lundqvist was under a lot of pressure, but managed to stand tall in net, finishing the night with 23 saves. Photo courtesy of Getty Images.

The Blues continued the pressure in the beginning of the third period, and managed to tie the game just 1:32 into the final period. David Backes carried the puck through the neutral zone and fired a shot towards Lundqvist. Henrik had trouble controlling the rebound, and Jared Schwartz was there to backhand it past Lundqvist.

Just a few minutes after the goal, Mats Zuccarello, the 5-foot-6 winger fought T.J. Oshie, who is listed at 5’11”. Although Oshie won the fight, Zuccarello’s fight fired up his teammates, as they later admitted in the locker room. It showed that they will be there to stand up for each other, no matter what the size of the skater.

Less than two minutes after the Zuccarello fight, Rick Nash connected with Chris Kreider on a beautiful breakaway goal at the 6:30 mark. Marc Staal made a great sprawling poke check to get the puck away from St. Louis, and over to Rick Nash. Nash made a cross-ice pass to Kreider, who was streaking down the left side, and Kreider buried it on a wrist shot that beat Elliot in between the stick side pads. 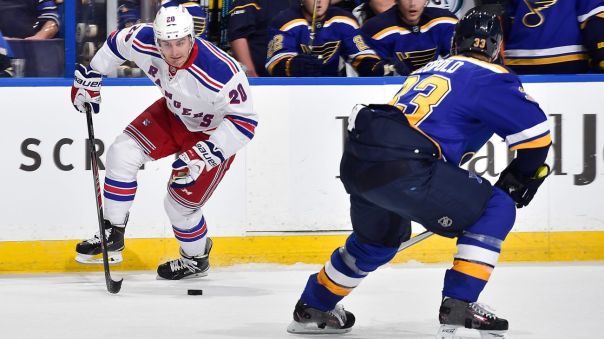 Chris Kreider has a solid game, scoring on a breakaway in the third period and assisting RIck Nash’s first goal. Photo courtesy of Getty Images.

However the Blues would not go quietly, and answered back with Statsny’s first goal as a member of the Blues. The goal came off of a Vladimir Tarasenko wrist shot on the short side that deflected off of Statsny. This tied the game at two with less than 10 minutes remaining in regulation.

Just when it looked like the game was headed to overtime, the Rangers pushed into St. Louis’ zone. Blues’ defenseman Alex Pietrangelo collected the puck following a save by Bryan Elliot. He attempted to clear the puck off the glass, but the puck bounced off of a stanchion in the glass.

The puck fell at Martin St. Louis’ feet, and he made a spectacular back-handed pass that slid under a Blues’ defenseman and found its way to the stick of Rick Nash, who promptly shot it into the back of the net to give the Rangers a 3-2 lead with 1:50 left in the period. This goal would seal it for New York, as they managed to hold onto the lead from that point on. 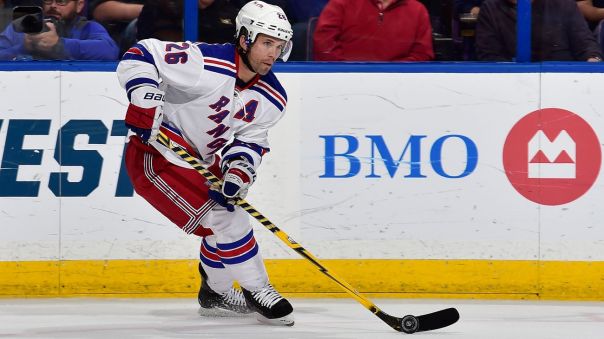 Martin St. Louis set up Rick Nash on a late goal in the third period, which would turn out to be the game winner. Photo courtesy of Getty Images.

However, the victory came at a price. Newly acquired defenseman Dan Boyle, who was brought in to replace Anton Stralman and man the powerplay, suffered a broken hand while blocking a shot in the second period. Boyle is expected to miss 4-6 weeks.

It wasn’t a pretty win, but it was a win nonetheless. Despite being dominated by St. Louis in the second period and a good chunk of the third period, the Rangers managed to find a way to secure an opening night win.

Faceoffs were a problem during the game, with the Blues winning 31 faceoffs compared to New York’s 25. Most of those were won by Dominic Moore.

Marty St. Louis looked good in his first game at center. He had an assist on the last two Ranger goals and set up a lot of other plays throughout the night.

The Rangers’ penalty kill was spectacular, going 5 for 5 and allowing very few chances. This was the strongest facet of New York’s game tonight.

McDonagh and Girardi also played spectacular defense, picking up right where they left off last season. McDonagh had an astounding 28:45 seconds of ice time.

It was also nice to see the top line scoring. At times, the top line struggled for the Rangers last season, with the trio of Pouliot, Brassard, and Zuccarello being their most consistent line last year. Rick Nash contributed to all three goals scored tonight, and Martin St. Louis also had two assists. 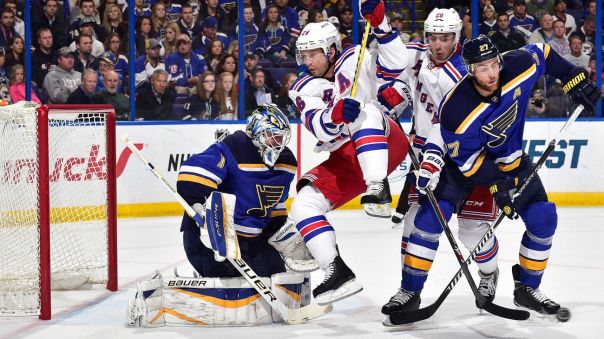 The only thing left to wonder is who will take Dan Boyle’s spot on the second line. The likely candidate is Kevin Klein, who is a very defensively sound player, but is limited in his offensive capabilities. Matt Hunwick could then take Klein’s place on the third line.

Boyle’s injury also effects the power play, and someone will now have to step up and take his role in that situation as well. Lee Stempniak did play the point during this game, and may wind up manning the point for the Rangers in their next game.

The Rangers will head into Colombus to face the Blue Jackets, the former team of both Rick Nash and Derick Brassard. Puck drop is at 7 PM. 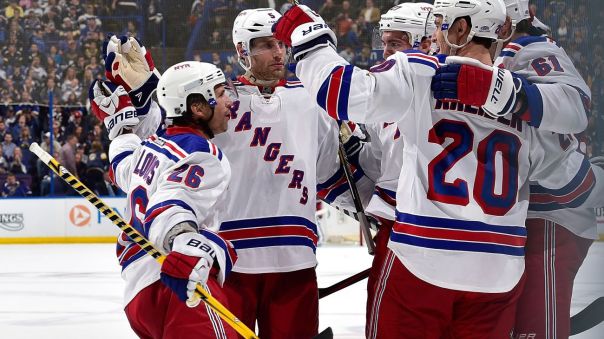 The Rangers next game is on the road against Colombus. Photo courtesy of Getty Images.