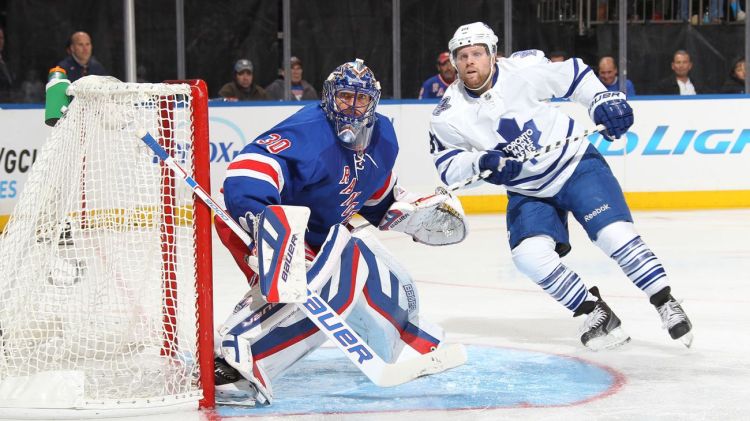 Henrik Lundqvist and his defense had a rough night, giving up 6 goals to the Toronto Maple Leafs. Photo courtesy of Getty Images.

Just a day after losing by three to the Blue Jackets, the Rangers dropped their home opener by a score of 6-3 in a pretty ugly game for the Blueshirts.

Before the game, Mats Zuccarello was a last minute scratch. Zuccarello did injure his shoulder in last night’s game against the Blue Jackets. He was removed from tonight’s lineup after skating in warmups, and is listed as day to day with an undisclosed injury, but it is likely his shoulder.

This meant Kevin Hayes would make his Rangers debut, and the lines were changed up as a result. Kevin Hayes finished with -2 rating, and had a great scoring opportunity stopped by the pad of Leafs’ goalie James Reimer. Hayes was pretty quiet, but we’ll have to see more of him before making a decision on his play.

The Rangers started out really strong, registering a quick 6 shots on goal but not scoring. The Maple Leafs opened up the scoring after a Dominic Moore tripping penalty led to the powerplay. Cody Franson scored his first goal on a wide open slap shot.

The game was back and forth after that, until 10 minutes later, when the Rangers tied it up on their highlight of the night. Marc Staal collected the puck in the Rangers’ zone, and made an outlet pass to Martin St. Louis, who leaped over the puck and snatched it off the boards. St. Louis turned and fired a pass over to a streaking Rick Nash, who smacked it in for his fouth goal of the year, and his third straight game with a goal.

Rick Nash scored another goal thanks to a beautiful pass from Martin St. Louis. Nash now has 4 goals on the year in the first three games. Photo courtesy of Getty Images.

That was about as good as it would get for the Rangers though, as the Maple Leafs would explode for 5 goals in the second period.

In a 4:30 span, the Leafs netted 3 goals, with one on the powerplay and one of them shorthanded.

Phil Kessel scored his first goal of the season, after a Slapshot from the point hit the skate of Dion Phaneuf and deflected right to a wide open Kessel. Kessel would also record 2 assists in the game.

Minutes later, James van Riemsdyk made a great pass from behind the net to an open Nazem Kadri in front of the net, who promptly snapped it past Lundqvist to make it 3-1.

But Toronto wasn’t done. The Rangers went on the powerplay shortly after the goal thanks to Anthony Duclair, who sped into the Maple Leafs’ zone and drew a hooking penalty. After a the puck was deflected up in the air off of a poke check near the blue line, Ryan McDonagh failed to send the puck into the zone, and van Riemsdyk managed to sneak the puck in between Lundqvist’s pads on  a breakaway.

The Rangers attempted to stay in the game, when Lee Stempniak made a great play to bring the puck past Toronto defenseman Morgan Rielly, and followed up his first shot with a second that got past Reimer to bring the Rangers within two.

Lee Stempniak scored his second goal of the season after a review reversed the initial no goal call. Stempniak also had an assist on Brassard’s goal. Photo courtesy of Getty Images.

Lundqvist headed to the bench immediately after that goal, and Talbot would remain in for the rest of the game. Lundqvist allowed 6 goals on 24 shots, making 18 saves in 35:13 of ice time.

A picture of the pregame ceremony for the Rangers lineup during their home opener.

Now I am not making excuses for Lundqvist, and he certainly did not have his best stuff tonight, but the defense did not help him at all. This has to be one of the worst defensive games the Rangers have played in recent memory, and all of the defensive lines did not play that great.

Out of all of the lines, I thought that the Moore-Hunwick line played the best, and they both made some nice defensive plays and skated well.

Rick Nash would not return in the third period, because he left to be with his wife, who gave birth to their first child.

Derick Brassard scored his first goal of the season, and looks to continue to register points, after Vigneault said he was one of the players that needed to “pick it up.” Photo courtesy of Getty Images.

The third period was mostly Rangers, but that’s because the Maple Leafs clearly let up and played a more laid back style in the third. The Rangers would manage to add on another goal, on a beautiful slapshot from Derick Brassard, which was his first goal of the year. Chris Kreider and Lee Stempniak would pick up assists on the play.

Talbot stopped all 12 shots he faced, and looked much sharper than yesterday. James Reimer was removed from the game after what looked like a light collision with Dominic Moore. Jonathan Bernier would finish the rest of the game.

The Rangers finished with 38 shots on goal, and the Maple Leafs had 36 shots.

There are a few key things to take away from the loss. One of the things that was clear was that the Rangers struggled to get it out of their own zone. The Maple Leafs would have stretches where they just put constant pressure on Lundqvist, and the Rangers could not clear it farther then the blue line many times. 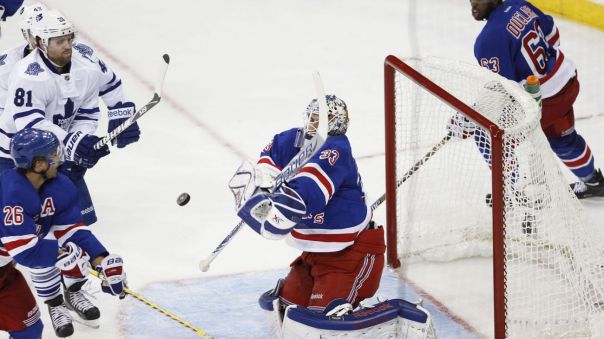 Cam Talbot replaced Henrik Lundqvist in the second period after he allowed 6 goals on 24 shots. Talbot stopped all 12 shots he faced. Photo courtesy of Getty Images.

The Rangers also need to start winning more face offs. The Maple Leafs won 37 faceoffs to the Rangers 29 face off wins. The other problems is where the face offs are being won. The Rangers do win some pace offs in the neutral zone, but struggle in positions where it really matters. It seems that most times the Rangers are in the offensive zone, or need to win a face off to get out of their own zone, they don’t, and it has been really costly, especially in these last two games.

The defense was pretty awful too. A lot of the goals were caused by defensive miscues, and Maple Leafs that were left opened or uncovered. Hopefully, the defense can pick it up in time for the next game, after the Rangers had two straight games in which the opposing team scored 5 or more goals.

JT Miller also played really poorly tonight. He had a lot of problems defensively, and his awareness was really delayed. He had trouble connecting on passes and did not contribute to the power play. Miller has really struggled so far, and need to step his game up big time, as he is now centering the third line position and needs to contribute on both sides of the puck.

Rick Nash continued his early dominance, and scored his fourth goal of the season. He has a total of 5 points in the first 3 games of the season. Martin St. Louis continues to make great passes, and has three points in as many games. He also won 8 of the 10 face offs he was in, which is a nice improvement from early on. He really seems to be settling into the center role quite nicely. 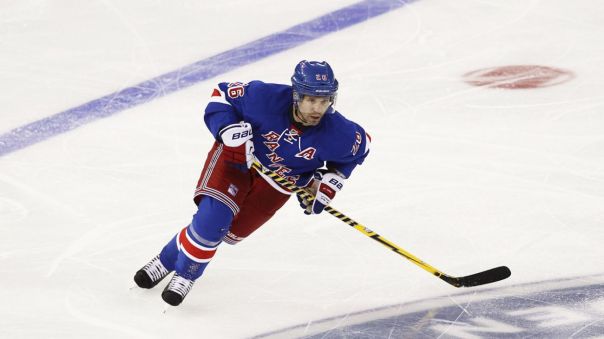 Martin St. Louis has 3 assists this season and is developing more at center as each game goes by. Photo courtesy of Getty Images.

Lee Stempniak also continued his great play, scoring his second goal of the season and assisting on Brassard’s goal. He has been one of the better forwards in the first three games, and played well again tonight.

Derick Brassard scored his first goal of the season, coming after Alain Vigneault said that he was one of the players that needed to “step it up.” Brassard’s line in the first two games (Hagelin, Brassard, Zuccarello) really struggled and had very little puck possession. With Zuccarello out, Brassard was on a line with Chris Kreider and Lee Stempniak, and they played much better in this game. Vigneault has some thinking to do when it comes to the Rangers’ lines in the future.

Anthony Duclair did not have a point, but actually had a +1 rating for the game. Duclair was quick on the puck and good offensively and defensively. He also drew a penalty on a great play where he was hooked while driving to the net. He played on the first line with St. Louis and Nash in tonight’s game.

Also, for anyone fretting about the loss, don’t. Yes they played bad, and yes Lundqvist let in 6 goals. But it is the third game of the season. The Rangers started out 3-6 last year and we all know how far they managed to go. It’s one loss. Do what the Rangers will likely do, forget about the game and move on to the next one.

The Rangers’ next game will come against the New York Islanders, who are off to a 2-0-0 start after beating the Hurricanes twice. That game will be on Tuesday night at 7 PM, at Madison Square Garden.

The Rangers will return to Madison Square Garden Tuesday night to take on division rivals, the New York Islanders.