After a game where the Rangers’ offense was clicking but defensive play let them down, the Rangers will keep the forward lines the same as they look to end a three game skid tonight against division foes the Carolina Hurricanes. 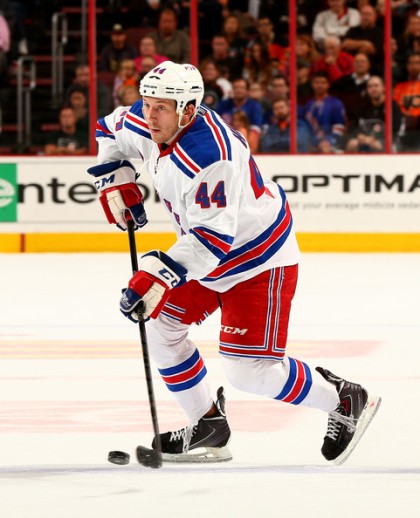 Matt Hunwick will be reinserted into the Rangers’ lineup for tonight’s game, paired with Marc Staal.

The only change will come on defense, where Matt Hunwick will replace Michael Kostka of defense. Kostka struggled in his first game of the season, with two costly turnovers that led to Islanders’ goals.

Hunwick put in solid minutes in his two games this season, and currently has no points and a -1 rating. Hunwick was skating with Marc Stall in practice.

The Hurricanes will also be looking for a win, after starting their season 0-2-1 (1 pt). However, Carolina is already dealing with a lot of injuries.

Jordan Staal is recovering from a broken bone in his right leg that he suffered in a preseason game. Brother and Captain Eric Staal is listed as day-today with an upper body injury. Jeff Skinner, who scored a career high 33 goals last season, is likely not to play with concussion issues. Defenseman Andrej Sekera is also out with an upper body injury, and is listed as day-to-day.

The Hurricanes will also be starting backup goaltender Anton Khudobin in net. Khudobin lost his first game this year, allowing 4 goals on 35 shots in a 4-3 loss to the Islanders. Last season, Khudobin was 19-14-1 with a 2.30 GAA and a .926 save percentage.

Jiri Tlusty is the leading scorer for the Hurricanes, with 3 goals on the season, 2 coming on the powerplay.

Henrik Lundqvist will be back in net, after 2 consecutive starts allowing 6 goals. It was the first time in Lundqvist’s career where he allowed 5 or more goals in back to back starts.

Henrik Lundqvist will look to rebound tonight after allowing 12 goals in his last two starts combined.

Another Ranger who has played well against Carolina in his career is Martin St. Louis. Played well against the Hurricanes is an understatement, as St. Louis has put up a massive 91 points in 79 career games, with 38 of those being goals.

St. Louis will look to add to those numbers tonight, where he has started the season with 4 assists in 4 games, and has built great chemistry with Rick Nash, who has 6 goals in the first 4 games of the season. Martin St. Louis is playing center full time for the first time in his career, and will once again center a line with Rick Nash and Anthony Duclair.

St. Louis does only have 6 shots on goal, and will hopefully start shooting on net more, as well as continuing to make great passes for assists.

Assistant Captain Martin St. Louis will look to add to his numbers against the Canes tonight, a team in which he has 91 career points against.

JT Miller and Jesper Fast are once again healthy scratches, after both Kevin Hayes and Ryan Malone played well against the Islanders.

Here are the lines for tonight’s matchup;

New York’s players have acknowledged in the locker room what went wrong with their losses. McDonagh stated how the little details of the game are extremely important when a team is struggling like the Rangers are.

“We have to start getting wins and stop letting these games get away from us. It has to begin for us (Thursday),” said Lee Stempniak, who has been one of the Rangers’ more productive forwards.

Derick Brassard also stated how the guys in the locker room can look to their early struggles last season, and remember how they were able to push through that.

With the Hurricanes experiencing injuried, and the Rangers looking for their first win on home ice, this is game that with a win could really help boost the player’s confidence. 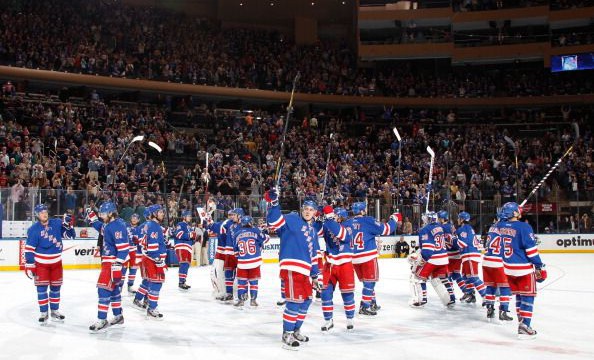 The Blueshirts are hoping to salute the crowd tonight and pick up their first home win of the season.