How to deal with the Rangers’ inconsistencies; Player Updates

So far this season, the Rangers have dealt with changing lineups, a slew of injuries, and multiple line changes throughout the first 24 games. The Blueshirts are hoping that as the starting lineup plays more games together, the chemistry and consistency will develop. Photo courtesy of MSG Photos.

The one thing that is always mentioned during the Rangers’ press conferences and interviews is consistency; their lack of it, how to build it, and how to sustain it.

Consistency has been a season-long issue for the Rangers, starting with the injuries that plagued them during the early part of the season. This led to Vigneault having to move some players around, like playing Martin St. Louis at center, despite playing the right wing for the entirety of his career.

When the Rangers were missing four of their top defensemen for a game, and three for a few weeks, Vigneault had to change the defensive pairings, as well as switching Captain Ryan McDonagh from left side defenseman to right side.

The Blueshirts also brought in a bunch of new players as well as rookies. Lee Stempniak, Kevin Hayes, Anthony Duclair, Dan Boyle, and others all came to New York to solidify the roster, and had to learn the system.

On top of this, players like Mats Zuccarello and Chris Kreider, offensive forces from last season, really haven’t hit their stride yet. Both players have put up decent numbers, but they have not delivered points on a consistent basis. Henrik Lundqvist, who also has started off the season slow in the past, has struggled at times this season as well. 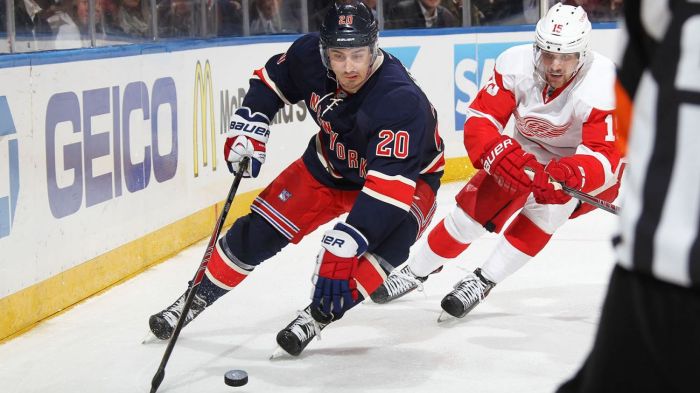 Chris Kreider is one of the Rangers skaters who has not really found his game yet. Kreider has four goals and nine assists, but has not scored a goal in a while. The Rangers will need players like Kreider and Mats Zuccarello to step up in order to establish the consistency they are looking for. Photo courtesy of MSG Photos.

When you add all of this together, it equals a rough way to start off a year. And that is exactly what has happened with the Rangers, who have an 11-9-4 record, which is good enough for third place in the Metropolitan Division.

Thankfully, it seems that the Rangers are getting past the injury bug, with most of the players back in the lineup. Tanner Glass is still out with a case of the Mumps, but Dan Boyle is ready to make his return on Saturday in Detroit.

The return of Derek Stepan has also been extremely helpful. In 12 games, Stepan has 13 points (2-11-13), and has solidified the second line center role. His return has allowed St. Louis to play at right wing again, which has helped him get past his slow start. St. Louis has scored 9 goals in his last 14 games.

On Saturday, the Rangers will get Dan Boyle back in the lineup, giving them the opening night starting defenseman, except for John Moore, who has been scratched in favor of Matt Hunwick. As long as the defense can stay healthy, the chemistry there will build over time and grow into the great defense that New York has been known for the past few seasons.

The third and fourth lines have also been a bit of a mystery. The rookie Kevin Hayes has been centering the third line, and has posted solid numbers, with three goals and five assists in 21 games. However, Hayes wasn’t a center in college, and is learning on the fly at the NHL level.

Kevin Hayes has been one of the promising rookies for the Rangers, tallying eight points in his first 21 games. Hayes is the third line center, and is learning the position with each game that he plays. Photo courtesy of MSG Photos.

Anthony Duclair, also a rookie, has shown some flashes of brilliance, but has struggled to stay relevant every night, and has had a hard time keeping his spot in the lineup.

Jesper Fast has been playing well as of late, scoring two goals and adding some offensive ability to the fourth line. Fast also plays solid defense and is effective on the penalty kill. JT Miller has been playing the other wing position on the bottom line, and has two points in his first two games since being recalled from Hartford.

It may take some time, but the Rangers and their players will hit their stride. Kevin Hayes will improve at center over time. Miller, Fast, and Duclair will all battle it out for a spot in the lineup.

Chris Kreider and Mats Zuccarello will eventually find their legs, and get back to the players that they were last season. And Henrik Lundqvist will bounce back and get better.

Last season, the Rangers were a .500 team until around Christmas time, where everything seemed to click for the Rangers. Lundqvist was playing better, the third line of Beniot Pouliot, Mats Zuccarello, and Derick Brassard blossomed into one of the Rangers’ bests. We could potentially see the same kind of turnaround this season as well.

There is still plenty of hockey to play Rangers fans. Yes it has not been the start Rangerstown had hoped for, but with the talent and youth that the roster holds, there is plenty of room for growth and potential.

In other news, Dan Boyle has been cleared to play on Saturday against the Red Wings after missing the last two games with the flu. Tanner Glass is still out with the Mumps, and will not travel to Detroit.

After missing the last two games with the flu, Dan Boyle will return to the Rangers lineup on Saturday against Detroit, taking the place of John Moore. Photo courtesy of MSG Photos.

NOTE: Just wanted to apologize for not posting anything in a few days. I have been extremely busy with finals and will resume regular posting. Thanks for the support!