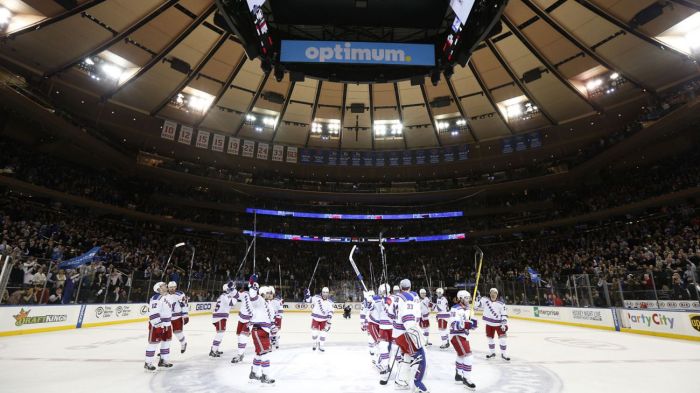 The Rangers secured a win on home ice against the Pittsburgh Penguins, thanks to an overtime slap shot from Kevin Klein. The Rangers will play the next four games on the road. Photo courtesy of MSG Photos.

The Rangers (12-10-4) lost another lead late in the game, but managed to find a way to beat the Penguins (18-6-3) thanks to a goal in overtime from Kevin Klein.

The Rangers surrendered the first goal of the game, but scored three straight after that before surrendering two late in the third. The last two goals were due to defensive miscues and mistakes. This season, when the Rangers have made mistakes, it winds up in their own net, and that’s what happened tonight.

Henrik Lundqvist did a good job in net, stopping 32 of the 35 shots that he faced. Lundqvist made some big saves, and was able to control the rebound for most of the night. Henrik earned his 10th win of the season, improving his record to 10-7-3.

Rick Nash continues to dominate opposing teams. Nash scored his 18th goal of the season on a great heads up play, extending his point streak to eight games. In that eight game span, Nash has six goals and three assists in that eight game span. He also has points in 21 of the Rangers 26 games. 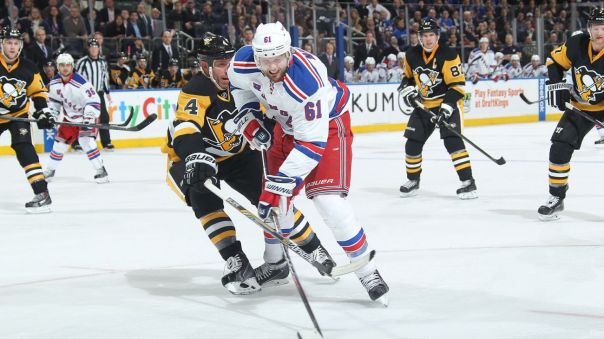 Rick Nash is consistently red hot, currently riding an eight game point streak, and scoring his 18th goal of the season tonight. Nash has been the Rangers best player and one of the biggest leaders on the ice. Photo courtesy of MSG Photos.

Kevin Klein is the Rangers best defenseman. He has been playing excellent defensively while players like Ryan McDonagh and Marc Staal has struggled, and now has six goals this season. Klein continues to be one of the MVP’s of this Rangers team.

The game had a much slower feel than usual when these two teams face off. Both teams were relatively conservative, playing very cautiously and not taking many chances.

The Penguins opened up the scoring over 12 minutes into the first period. The Rangers had trouble handling the puck in the neutral zone, and Steve Downie was able to chip it to Sidney Crosby, who gave it to Nick Spaling for a one timer that beat Lundqvist up high, giving Pittsburgh a one goal lead. 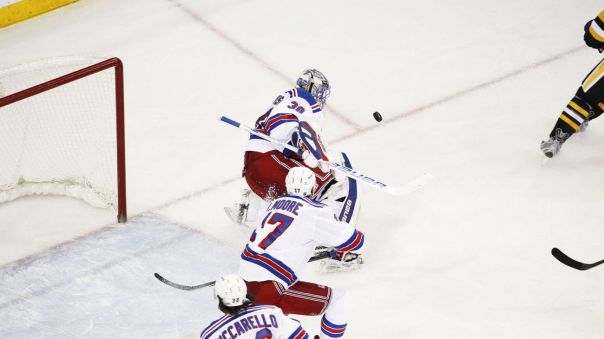 Henrik Lundqvist was solid tonight, making 32 saves and holding off the Penguins for most of the game. Photo courtesy of MSG Photos.

The Rangers would get a four minute power play, after a high stick to Kevin Klein’s ear drew blood, but could not convert. The power play woes continued from last game, and New York appeared to be trying to make too many passes, rather than just getting good shots on net.

Pittsburgh also played a phenomenal defensive period. With many of their key players injured, like Kris Letang and Patrick Hornqvist, the Penguins have turned to a more relaxed style of play, relying more on their defense and the goaltending of Marc-Andre Fleury. Their coverage was good and the Rangers really did not have many good chances in the first period.

The second period was much better for the Rangers, and they managed to come out with plenty of energy and dominate for long stretches of the game. They also managed to score first in the period, with JT Miller scoring his second goal of the season. 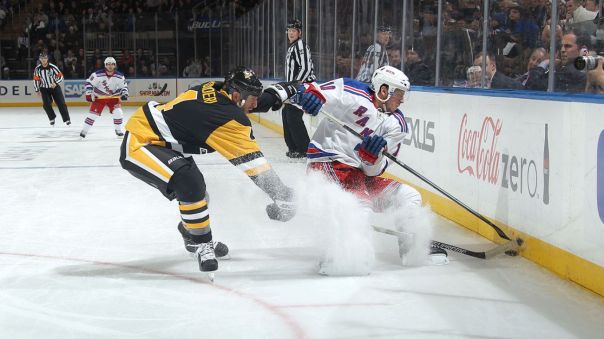 JT Miller had another solid game, scoring his second goal in his last four games. Miller has been playing much better on the wing, and provides a scoring touch to the Rangers bottom line. Photo courtesy of MSG Photos.

Dominic Moore started the play with an excellent backcheck. Martin St. Louis collected the puck and went along the boards, and made a great pass to Miller on the far wing for quick tap in, a goal that tied the game at one.

Less than five minutes later, the Blueshirts would strike again, and it was Rick Nash yet again who gave the Rangers the lead.

After getting the puck out of New York’s zone, Mats Zuccarello lifted the puck high in order to send the puck into Pittsburgh’s offensive zone. The Penguins defenseman had trouble handling the puck, and Nash, who never stopped skating, was there to collect it. After his backhand was stopped, he somehow was able to reach back and tap in his own rebound, giving the Rangers their first lead of the game.

It was Nash’s 18th goal of the season, which extended his point streak. It was also Zuccarello’s first point in the last five games. 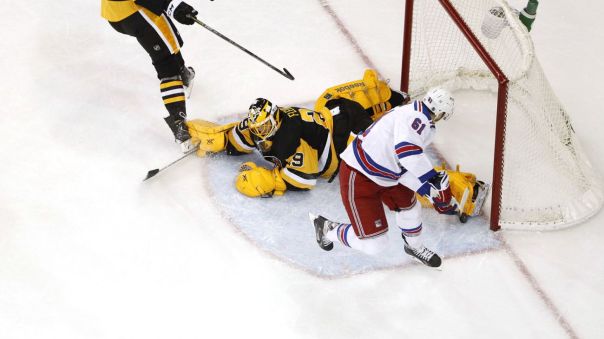 Pittsburgh would get a power play opportunity, but the Rangers penalty kill was strong, and New York headed into the locker room with a one goal lead.

In the third period, the Rangers went into ultra-defensive mode, not taking any risks and trying to hold onto their lead. New York had one shot through the first 10 minutes of the period, but also held off the Penguins.

But the Rangers would capitalize on one of their few chances, and it was Kevin Hayes who scored on a spectacular effort to put the Rangers up by two with seven minutes to go.

It started with Hayes blocking a puck down in the Rangers zone, and breaking out through the neutral zone with Rick Nash. Nash was well covered, so Hayes took it himself, hammering in the rebound after his initial shot was stopped. 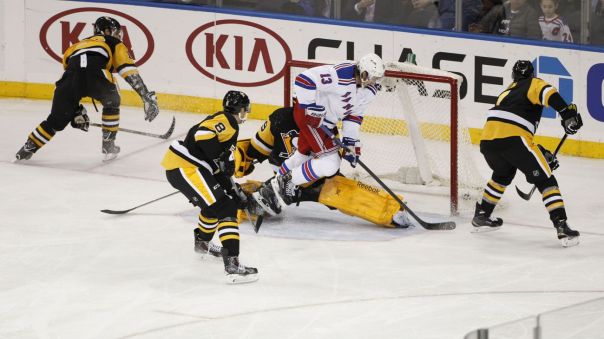 Kevin Hayes scored an impressive goal on an odd-man rush, putting his own rebound past Fleury to give the Rangers a two goal lead. The rookie continues to impress and show his growth with every game that passes. Photo courtesy of MSG Photos.

It was another nice defensive play by the rookie, followed by a showcase of his strength, skill, and confidence in himself. Hayes now has two goals in his last three games, and is currently on a four game point streak.

After the goal, it truly looked like the Rangers had a win secured. Hayes put the Blueshirts up by two, the Penguins were not getting many chances in the third, and there was just half of a period left to play.

However, the Rangers continued their trend of blowing leads in games, with the Penguins suddenly scoring two goals in a matter of 24 second halfway through the third period.

The first goal came after the Rangers could not control a puck behind the net following a rebound. Brandon Sutter was eventually able to center the loose puck, and a red-hot Evgeni Malkin scored his 15th goal of the season.

Just 24 seconds after that Steve Downie went to chip the puck into the zone. The puck was bouncing, and Marc Staal missed on a clearing attempt. Downie got the puck again and fired a wrist shot that deflected off of Staal’s stick and past Lundqvist, tying the game at three.

Marc Staal’s struggles this season continued, with the third goal falling on his shoulders. Rather than getting in front of the puck and trying to control it, Staal smacked at the loose puck with his stick and missed, giving the Penguins another chance at a shot. Staal needs to make a better play there, especially when he is trusted with crucial minutes in games.

For the ninth game this season, the Rangers surrendered a lead, with this one coming late in the third period. This is something that needs to change, as its not wise to constantly rely on late game heroics.

Fortunately for the Rangers, the late game heroics were there, and it was Kevin Klein who scored on a gorgeous slap shot from the point, beating Marc-Andre Fleury underneath his arm and giving New York the crucial extra point. 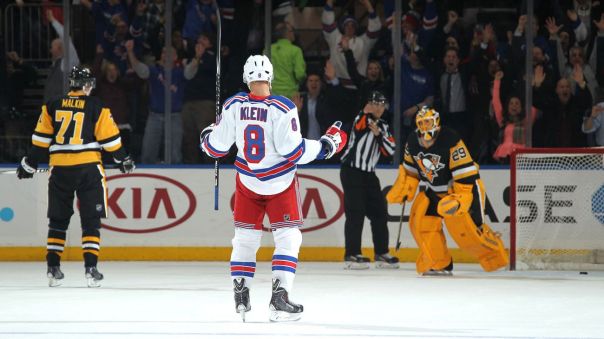 Kevin Klein was the overtime hero, firing a slap shot past Marc-Andre Fleury for his sixth goal of the season, Klein has been the Rangers best defender this season and continues to be an unsung hero. Photo courtesy of MSG Photos.

There is not enough good things to say about Rick Nash. Nash scored again tonight, making it eight straight games with at least one point. Nash has also been extremely consistent, picking up at least one point in 21 of the Rangers 26 games. He plays extremely well offensively and defensively, and leads this team on the ice.

JT Miller has been very solid since being recalled from Hartford. In four games, Miller has three points (2-1-3). Miller took advantage of his chance playing on the second line, and was the beneficiary of a fantastic pass from Martin St. Louis. Miller’s struggles in the NHL have mostly come with him playing the center role. Now that he has been playing on the wing, Miller looks much better, and provides much needed scoring to the Rangers bottom line.

Kevin Hayes’ goal was truly impressive. It was unassisted, and started with him making a nice defensive play in the Rangers zone. I know I have been raving about Kevin Hayes, but you can truly see his development with every game that passes. Hayes now has 10 points this season, (4-6-10), and is riding a four game point streak. The Kevin Hayes offseason acquisition is shaping up to be a very good signing.

The win tonight was very important for the Rangers, especially due to the fact that they are heading on a four game west coast trip. A loss in overtime would have been crushing before the road trip. 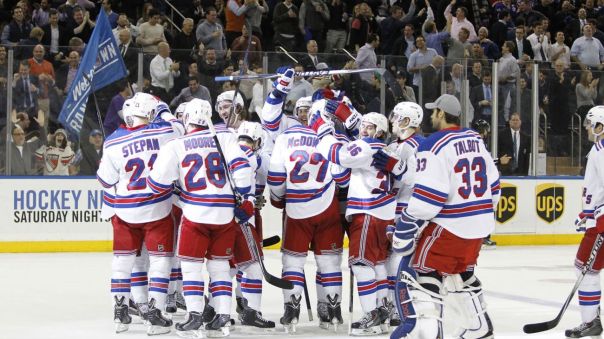 The win tonight for the Rangers was definitely a much needed one, snapping a two game losing streak right before they go on a four game road trip. Photo courtesy of MSG Photos.

The Rangers will have another long break, with the next game coming on Saturday against the Canucks.