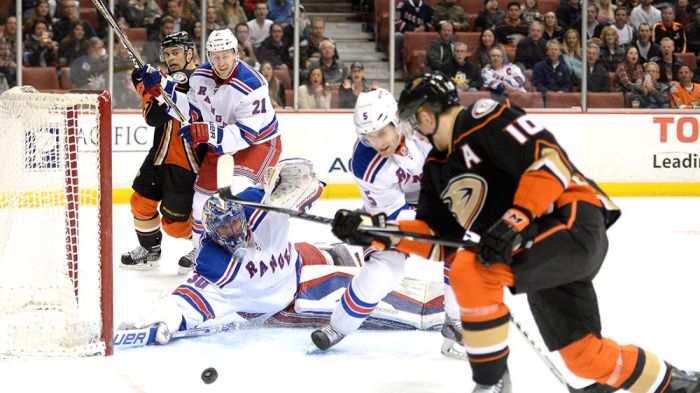 The Rangers and the Ducks faced off in an extremely competitive game, with the Rangers coming away with a huge win to start their road trip. Photo courtesy of Getty Images.

The game had a playoff feel to it, with both teams playing with high intensity, very physically, and extremely competitive, making for one of the Rangers most entertaining games this season. Ilya Bryzgalov, making just his second start this season, played well for the Ducks, stopping 26 shots, but eventually fell short.

Henrik Lundqvist continued his sensational play lately, making 24 saves, including some key saves and decisions in the game that helped lead to a win for the Rangers. Lundqvist earned his 19th victory of the season, and his 10th in his last 11 starts. In his last 11 games, Lundqvist is 10-1-0 with a 1.62 goals allowed average and a .936 save percentage.

Rick Nash scored the Rangers second goal of the game, giving him a sensational 25 goals in just 37 games this season. He also has 39 points (25-24-39) this season, which is the amount of points he had last year through 65 games.

The first period was very tight, with both teams coming out of the gates strong, fast, and physical, showing why they are two of the best teams in the league. No goals were scored, in part to quality goaltending on both sides, but the Rangers went into the locker room confident with their style of play over the first 20 minutes.

The Rangers continued to get the puck on net in the second period, with Dan Boyle and Chris Kreider getting stopped at the doorstep.

However, the Rangers continued their recent trend of scoring first, with Derick Brassard picking up his 11th goal of the season just over nine minutes into the second period. The Rangers pulled Lundqvist because of a delayed penalty call, and JT Miller did a great job holding onto the puck and finding Brassard, who had just come onto the ice. Brassard’s slap shot went over the shoulder of Bryzgalov, putting the Rangers up 1-0. 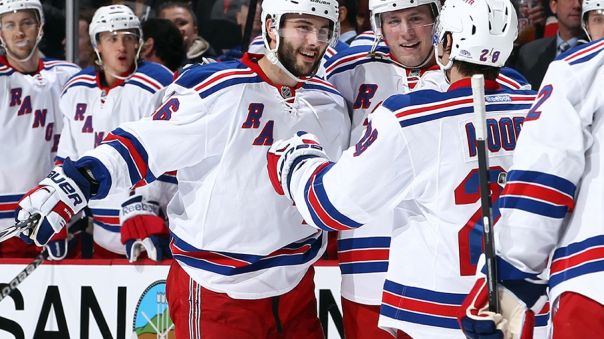 Derick Brassard opened the scoring in the second period, blasting his 11th goal of the season over the shoulder of Bryzgalov. Brassard has a three game goal streak. Photo courtesy of Getty Images.

Brassard now has his second three-game goal streak this season, which ties a career high. He is also second on the team in scoring this season, with 31 points (11-20-31) in 35 games this season.

Henrik and the Rangers defense were key in shutting down a late surge of offense by the Ducks, with Marc Staal standing out in the period.

The Rangers wasted no time in the third period, scoring just 2:32 into the period. The Rangers couldn’t connect on a 2-on-1 opportunity, but Rick Nash pressured on the forecheck, and the puck eventually came to Kevin Klein in front of the net. His slap shot was deflected by Nash, and eventually found the back of the net, giving the Rangers a two goal lead.

The Ducks would get a power play opportunity later in the period, but the Rangers did a good job of killing it off. However, Derek Stepan was sent off for delay of game, and the Ducks scored on a beautiful slap shot from Francois Beauchemin, cutting the lear to just one.

Arguably the biggest moment of the game came four minutes later. The Ducks won a faceoff, and attempted to make a pass. Zuccarello was in a perfect position, stole the pass, and sniped it top shelf for his seventh goal of the season, and his first in 10 games. The goal recaptured the Rangers two goal lead, and killed all of the Ducks momentum. 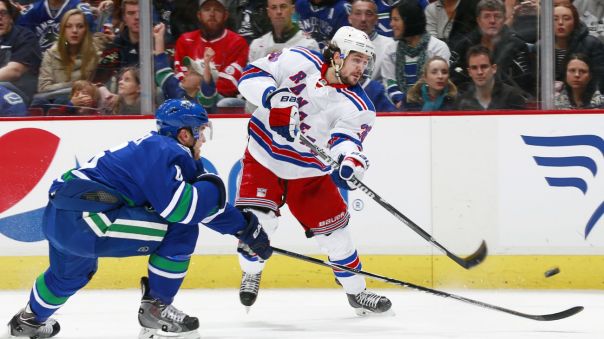 Mats Zuccarello’s goal in the third period came at a crucial time, ending the Ducks momentum swing and giving the Rangers their two goal lead back. Photo courtesy of Getty Images.

Dominic Moore would later seal the victory with an empty netter, picking up his third goal of the season, and ending the night with a 4-1 Rangers victory.

The Rangers passed this test with flying colors, winning a tough game against the best team in the NHL, all while instilling their style of play throughout the night. It was an impressive win over a very tough team, drawing compliments from both head coaches.

This will also furthered the team’s sense of confidence, which is filling the locker room following their recent success. They are also starting to score goals consistently, outscoring opponents 44-18 over the last 12 games, as well as playing shutdown defense, and obviously deadly combination.

Marc Staal had a tremendous game against the Ducks. On numerous occasions, Staal was seen blocking passes, getting in the shooting lane, tying up an attacker, and clearing the crease, as well as picking up an assist on Brassard’s goal. Staal continues to be a strong defender for the Rangers on a daily basis. 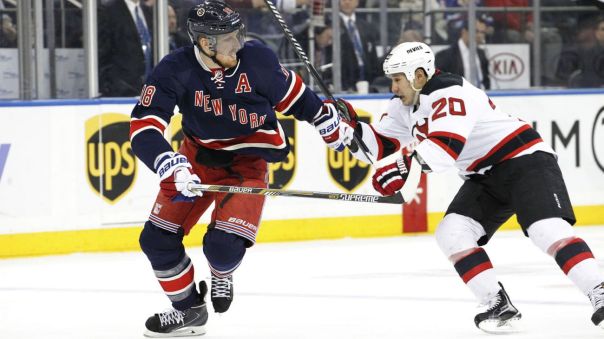 Marc Staal played a tremendous game for the Rangers, shutting down Anaheim’s top players like Ryan Getzlaf and Corey Perry, Staal also had an assist on Brassard’s goal. Photo courtesy of MSG Photos.

Rick Nash scored his 25th goal of the season tonight, and continues to be the Rangers best player. While 25 goals is impressive enough, what’s even more amazing is that he has scored in so many ways. Whether it’s a wrist shot, breakaway, deflections, shorthanded, or on the power play, Nash seems to always find a way to find the back of the net, which is exactly what the Rangers need.

New York’s fourth line was very impressive tonight, as they were on the ice for Brassard’s goal as well as for the empty netter. Without Tanner Glass, the bottom line has been much more effective, and can create some offensive chances, as well as playing strong defense.

The Rangers will play again tomorrow, where they play the Los Angeles Kings in a rematch of the 2014 Stanley Cup Finals. The puck will drop at 10:30, and will be televised on MSG Network.