Rangers prepared for “Battle of New York” against the Islanders 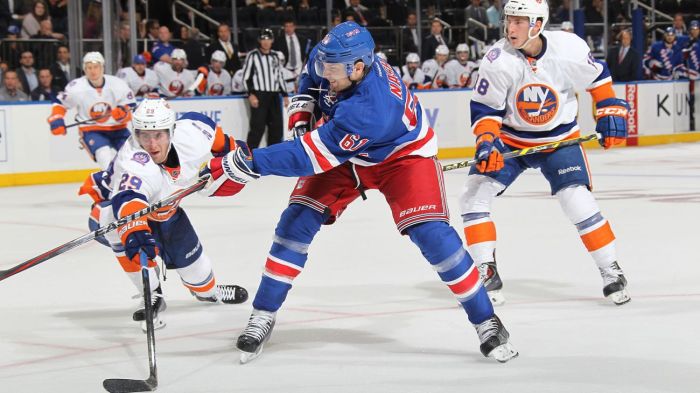 Rick Nash fared well in his last game against the Islanders, scoring twice in the loss. Nash will look to keep scoring goals and come away with a win this time. Photo courtesy of MSG Photos.

After sweeping their California road trip and winning 13 of their last 14 games, the Rangers (24-11-4) will take on the division rival Islanders (28-13-1) at Madison Square Garden.

The Rangers enter tonight’s contest with 52 points and in a Wild Card spot. The Islanders are five points ahead of the rangers and in first place, but have played three more games than the Blueshirts, making tonight’s game much more important than just a rivalry game.

The Islanders are coming off of a 5-2 victory over the Columbus Blue Jackets, with Chad Johnson picking up his sixth win of the season. That means that Jaroslav Halak, who is 20-8-0 with a 2.29 goals allowed average and a .914 save percentage will be in net against the Rangers.

Kyle Okposo picked up his ninth goal of the season on Saturday, giving him a strong total of 37 points (9-28-37) this season. The only Islander player with more points is the captain John Tavares, who is off to a great start with 39 points (19-20-39) in 42 games played.

The Isles also made key offseason acquisitions on defense, picking up Johnny Boychuck and Nick Leddy. Both have fit into the lineup very well, and have given the team production from the blue line. Boychuck and Leddy both have 19 points this season.

The Islanders have won their last two games, and four of their last five when playing at Madison Square Garden, including a dominating 6-3 victory over the Rangers on October 14th.

The Rangers beat the San Jose Sharks on Saturday to earn their fifth consecutive victory, continuing their winning ways over the past month.

Vingeault seems to have found a lineup that is working well, and there will be no changes for tonight’s game.

Henrik Lundqvist will start in net for the Rangers, and has also been red hot lately, winning 12 of his last 13 starts and allowing just one goal in each of his last three starts. Lundqvist is 20-8-3 this season, with a 2.26 goals allowed average and a .918 save percentage. 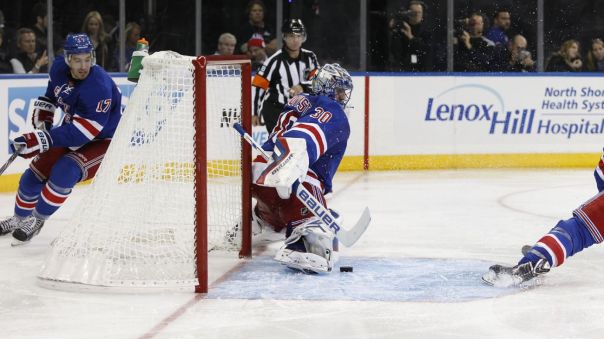 Henrik Lundqvist allowed just one goal against the San Jose Sharks, and is looking for his 21st win of the season, and his 13th in his last 14 games played. Photo courtesy of MSG Photos.

Martin St. Louis continues to be a key point producer for the Rangers this season, and scored another goal against the Sharks, giving him 14 this season. St. Louis has points in six of the last eight games, putting up nine points (4-5-9) in that span. St. Louis is third on the team in points with 32 (14-18-32), and will need to be a big part of a strong second line if the Rangers want to keep their win streak going.

After a slow start, Mats Zuccarello has been extremely relevant over the past six weeks, and has been part of a very successful top line for the Rangers. Even when he isn’t scoring, Zuccarello plays with a ton of passion, energy, and fire, playing an aggressive game despite his 5-foot-6 frame. Zuccarello picked up an assist on Rick Nash’s empty netter against the Sharks, and scored a crucial third goal against the Ducks to seal the win. “Zukes” has eight points (1-7-8) in his past 10 games, and 12 points (3-9-12) in his last 14. 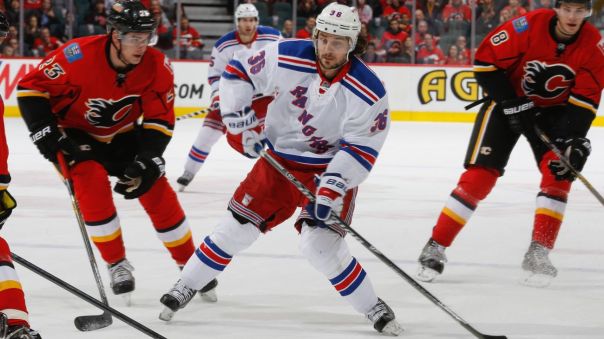 As of late, Mats Zuccarello has been a part of a very potent top line for the Rangers, picking up 12 points over his last 14 games, and playing very fast an aggressively. Photo courtesy of Getty Images.

Offensively, the Rangers have exploded in the 14 game span. Currently in the midst of a five game win streak, the Rangers have outscored opponents 22-8, while going 10-26 on the power play in their last eight games.

The Rangers power play will be extremely important tonight, especially due to the fact that the Islanders penalty kill is 26th in the league, with just a 76.5% kill rate. The Blueshirts will need to take advantage of any time that they have on the man advantage.

Tonight will also be a memorable day for Marc Staal, who will be celebrating his 18th birthday and playing in his 500th career NHL game.

The Rangers and the Islanders will face off at Madison Square Garden tonight at 7 PM. The game will be televised on MSG Network.