← Stop worrying about faceoffs, the Rangers should address other areas instead
Rangers fall to resilient Vancouver Canucks in a shootout; St. Louis delivers late →

Rangers ready for battle with Canucks on home ice; Kreider hitting his stride

The Rangers are heading back home, where they will play four of their next five games, including tonight matchup against the Canucks. Photo courtesy of Getty Images.

With four straight wins under their belts, all coming on the road, the Rangers (34-16-5) are back at Madison Square Garden to take on the Vancouver Canucks (32-21-3) for the second and final time this season.

The Rangers beat the Canucks back on December 13th in Vancouver, starting off their four game road trip with a 5-1 blowout. Mats Zuccarello led the way with two goals, and JT Miller also found the back of the net. Defenseman contributed on both sides of the puck, with Ryan McDonagh and Marc Staal scoring their first goals of the season in that game.

The Canucks are coming off of a huge 3-2 win over the Minnesota Wild, allowing them to hold on to their third place position in the Pacific Division. The Kings are just one point behind them, so Vancouver needs every point they can get in the very tight Western Conference playoff race.

The Sedin twins have been offensive juggernauts throughout their career, and make up part of the Canucks dangerous top line. Identical in appearance and almost identical in production, they are first and second on the team in scoring. Henrik leads the team with 48 points (10-38-48), and Daniel is right behind him, with 47 points (13-34-47) this season.

Radim Vrabata plays alongside Daniel and Henrik Sedin, and has been reaping the benefits, leading the team with 21 goals, and adding 19 assists to that total. Vrabata is a very good shooter with sneaky speed, and is not to be forgotten on the Canucks dangerous top line.

Ryan Miller, who has spent most of his career in Buffalo, is playing in his first season for the Canucks, and is having a pretty good season. Miller is 26-15-1 with a 2.46 GAA and a .913 save percentage providing the Canucks with a steady presence in net. He has a tendency to make spectacular saves, and the Rangers will need to put pressure on him early.

New York is coming off of an emotional 6-5 comeback win over the New York Islanders, propelling themselves past the Penguins and into second place in the Metropolitan Division. The Rangers are just four points behind the Isles with three games in hand.

Cam Talbot will be making his eighth consecutive start, and will be looking for his fifth straight win as a starter. It’s just his third game in the Garden since taking over as starter, and he has won one of those games. Talbot has allowed three goals or more in five of his seven starts, but has done a lot of good, often coming up with clutch saves when his team is struggling and needs him most. A win would put Talbot in double digits for the season.

Cam Talbot will make his eighth consecutive start while the Rangers hope to extend their win streak to five games. Photo courtesy of Getty Images.

Ryan McDonagh scored twice in the game against the Islanders, and Kevin Klein found the back of the net to give the Rangers the late lead, his fourth game winning goal of the season. The Rangers are finally beginning to get steady production from the back end, with defensemen scoring 11 goals in the ast nine game. This allows the Rangers to attack from all over the ice, becoming a deeper and stronger team.

The second line was able to break through in a big way, with Derek Stepan and Chris Krieder scoring to spark the comeback, and Martin St. Louis finding the back of the net for the first time in 16 games to tie the game at five. After finally ending the drought, hopefully St. Louis has gotten the monkey off his back, and will be able to start producing more consistently.

Chris Kreider’s game has been the most improved over the last month or two. When his grandfather got sick and passed away in November, Kreider admitted that his head and heart were in another place, causing him to enter an 18 game goal drought. However, he has since gotten himself back in the game, and is proving to be an extremely dangerous player for the opposition to deal with.

Chris Kreider is playing with a lot more confidence, bolstering the Rangers second line with his size and speed. Photo courtesy of MSG Photos.

His linemate Derek Stepan said that his play since the break has been “phenomenal,” and it truly has been. Kreider has four goals and three assists in 11 games since the All Star break, using his speed and tremendous strength to his advantage on a nightly basis. He seems to consistently have the ability to beat his defender on the outside, and is getting a lot of quality opportunities.

Kreider’s goal on Monday put him at 14 for the season, just three shy of the career high he set last season. He also has 31 points, good enough for sixth on the team and six points shy of his career high.

The Rangers top line is still clicking, led by Rick Nash, who has seven goals and five assists in the last nine games. Derick Brassard, who has gone under the radar for most of the season, is playing like a top center. Brass has a four game assist streak, with five helpers in those games, and is second on the team in points with 44 (13-31-44).

The only change in the lineup is on defense, with John Moore entering Matt Hunwick’s spot on the third pairing. 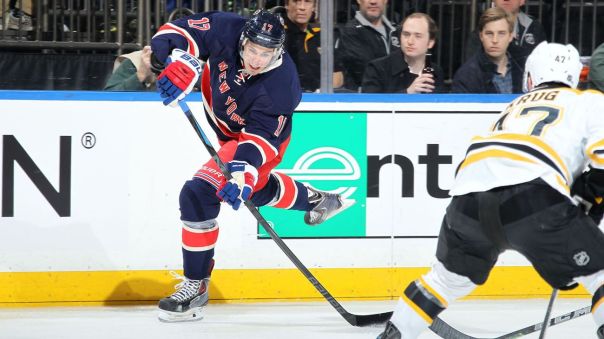 John Moore will be back in the Rangers lineup tonight, and will skate alongside Dan Boyle. Photo courtesy of MSG Photos.

The Rangers and the Canucks will face off at 7 PM at Madison Square Garden. The game will be broadcasted on MSG Network.

← Stop worrying about faceoffs, the Rangers should address other areas instead
Rangers fall to resilient Vancouver Canucks in a shootout; St. Louis delivers late →