Derick Brassardleps over a shot in the Rangers 3-1 win over the Sabres at the First Niagara Center. Photo courtesy of Getty Images.

Making his first ever NHL start, Mackenzie Skapski backstopped the Rangers (35-16-6) to an important 3-1 win over the Buffalo Sabres (17-38-4), giving the Blueshirts their fifth consecutive road victory and putting them two points ahead the Washington Capitals for second in the Metropolitan Division.

The game did not start as Skapski and the Rangers would have hoped, surrendering a goal in the first 14 seconds off of a Rangers turnover. But after that, the Rangers dominated, outshooting the Sabres 31-12 in the first two periods and controlling the neutral zone.

Skapski did not get a lot of work in the first two periods, but was very strong in the final 20 minutes, making 13 saves and bouncing back nicely from the initial goal. He looked very comfortable in net, and truly deserved the win in the game.

Mackenzie Skapski was strong in his first career NHL start, making 24 saves, including some really nice stops late in the game. Photo courtesy of Getty Images.

His counterpart, Michal Neuvirth of the Sabres, deserves some credit too. If not for him, the Rangers looked like they could have put up 10 goals instead of three. Neuvirth robbed a few Rangers on more than one occasion, and finished the night with 40 saves.

Just 14 seconds in, Matt Moulson scored on a tip-in on the Sabres first shot on goal, giving them an early lead. Kevin Klein and Marc Staal both went for the puck off the faceoff, but it bounced over to Torrey Mitchell, who passed it to a wide open Moulson for his 9th goal of the season. It was also his 300th career point.

It did not set the tone right, and it appeared that the Rangers may have a battle on their hands. But that was just about the only significant pressure the Sabres would apply in the period, and the Rangers took over.

Just about six minutes into the game, New York answered back, and it was Carl Hagelin scoring again, his 11th point in the last 14 games. JT Miller lifted a puck out of the Rangers zone, and it managed to sneak through three Sabres players. Hagelin controlled the bouncing puck, going five hole on Neuvirth and tying the game at one. Dan Boyle had the other assist.

Carl Hagelin gets some love from his teammates after scoring his 14th goal of the season. Photo courtesy of Getty Images.

The Rangers would get a long 5 against 3 power play opportunity, but could not cash in, and both teams headed to the locker room tied at one.

The Rangers wasted no time after the second period began, and it was Rick Nash, who else, scoring his 37th goal of the season on a gorgeous passing play, just 37 seconds into the period. After crossing over the blue line, Marc Staal passed it off to Derick Brassard, who used a slap-pass to find Nash for a one timer on the other wing, giving New York their first lead of the game.

With the assist, Derick Brassard extended his assist streak to six games, a career high. It was also the 25th time this season that Rick Nash and Derick Brassard had a point on the same goal.

Less than eight minutes later, the Rangers extended their lead to two goals, and it was Zuccarello scoring his 12th of the season.

Derick Brassard hit Rick Nash in stride with a clever pass off the boards, and Nash beat his defender on the outside before cutting back in and hitting the post. Zuccarello was the trailer on the play, and he followed through on the rebound, sending it into the empty net for a 3-1 Rangers lead.

Mats Zuccarello found the back of the net for the 12th time this season, extending the Rangers lead to 3-1. Photo courtesy of Getty Images.

That was the 26th time that Brassard and Nash had a point on the same goal, and Brassard’s second assist of the game tied his career high of 47 points. Brassard leads the team in assists with 34.

After the game, head coach Alain Vigneault said that the Brassard line was “dominating” in the third period, scoring the two goals and singlehandedly taking over the game.

Stepan hit the post on a rebound opportunity, but that was the closest that the Rangers would come to another goal.

One of Skapski’s best saves of the game came at the end of this period, when he stopped a shot from the point through a screen that was deflected downward by Matt Moulson, squeezing the legs together to cover the puck.

In the third period, the highlight was Skapski, as he made 13 saves, blanking the Sabres on their best chances of the game. Skapski had a flurry of saves on a Sabres rush, stopping Chris Stewart on two point blank shots, and robbing Andrej Meszaros with the glove later in the period.

Mackenzie Skapski’s best saves came in the final period, where he stopped all 13 shots to keep the Sabres at bay. Photo courtesy of Getty Images.

When the final horn sounded, Skapski raised his arms in triumph, capping off a successful day for himself, and picking up a big win for the Rangers.

Like I pointed out in the preview, Carl Hagelin continues to play dominant hockey since scoring the overtime winner against Ottawa before the All Star break. Hagelin has 11 points in the past 14 games (6-5-11), and has been generating a lot more offense in games, turning the third line into a threat. Having him as another goal outlet, especially with his speed, makes the Rangers an even more dangerous team.

If you think Carl Hagelin’s stat line is impressive, you’ll be blown away by Rick Nash. Nash is having a scary good year when it comes to consistency, scoring another goal in the game, the game winner. Nash is the first player in the NHL to reach 30 games with a goal, and Nash is the first Ranger to score 37 goals in the team’s first 57 games since Adam Graves did it in the 1993-94 season. Nash’s two points puts him at 58 (37-21-58) for the season, averaging over a point per game. 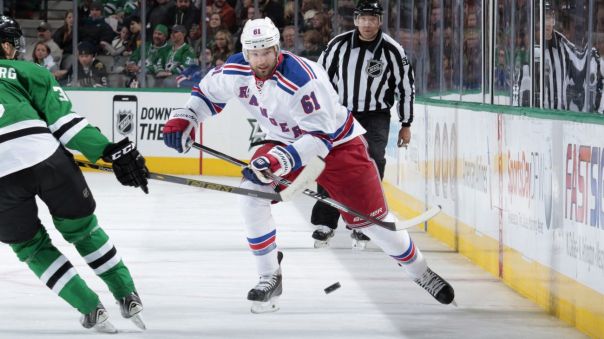 Rick Nash’s stats are mind boggling, and has recorded at least a point in 39 of the Rangers 57 games. Photo courtesy of Getty Images.

His linemate, Derick Brassard, has tremendous chemistry alongside Rick Nash, seemingly involved in most of his plays lately. Brassard had two assists in tonight’s game, extending the assist streak to six games (8), a career high. He also tied his career high of 47 points, and the Rangers still have a lot of hockey left to play. Brassard’s passing skills are impeccable, and he continues to dazzle with his smarts and skills every game.

And the story of the game clearly goes to Mackenzie Skapski, who was very strong in his NHL debut. Although it didn’t start out how he would have liked it, he got comfortable and settled in after that, stopping the net 24 shots that he faced.

One thing I really liked was how he played and tracked the puck. He seemed to be aware of where it was at all times, and played the angles well, not overcommitting to anything. He made a few quick reaction saves as well, and had a strong game in his first career win.

I also liked how during the TV timeouts, he was always going over to the bench, talking to each guy and tell them how they were doing a good job, a sign of his maturity and leadership qualities.

Oh, and it also happened to be his Dad’s birthday.

The Rangers will have a day off on Saturday before facing the Columbus Blue Jackets on Sunday for the start of a three game homestand.