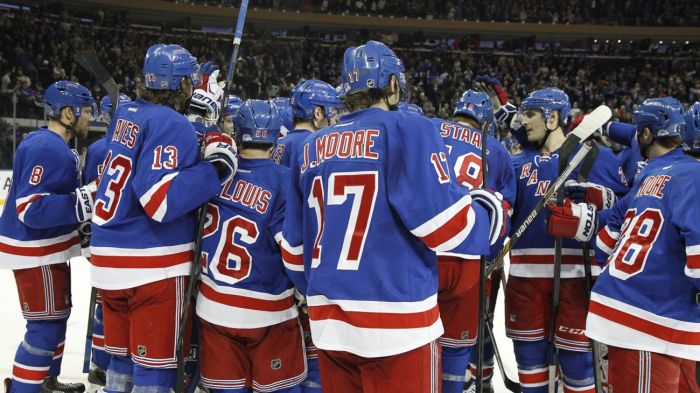 The Rangers celebrate after their shootout win over the Blue Jackets at the Garden. Photo courtesy of MSG Photos.

Despite surrendering a three goal lead, the Rangers (36-16-6) brought the game to the shootout against a gritty Columbus Blue Jackets (26-28-4) squad, coming away with a very important 4-3 win, giving the Rangers points in eight consecutive games (6-0-2).

Cam Talbot was back in net for the Rangers, and did enough to pick up his 10th win of the season. The game tying goal was one that Talbot admittedly needed to stop, but outside of that, he played pretty well, making 27 saves.

Martin St. Louis keeps on rolling, having one of his best games of the season, scoring two goals in regulation and converting on his shootout attempt. St. Louis now has 18 goals and 44 points, sitting in third place on the team in scoring. Since ending his goal drought against the Islanders, St. Louis has four goals in the last four games, and seven points (4-3-7) in the last five games. He has looked rejuvenated since breaking out of his slump, and was easily the Rangers best forward on the ice. 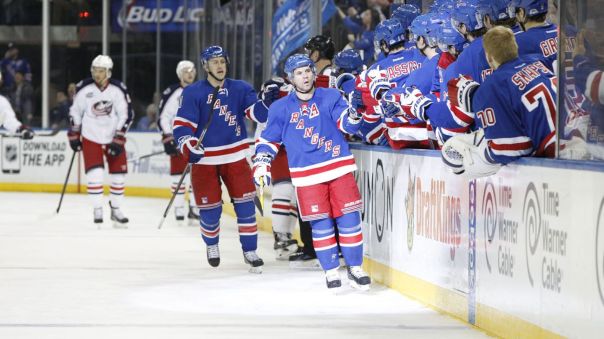 With the Islanders losing 4-0 to the Canucks tonight, this win is really advantageous for the Rangers. The Blueshirts are now second in the Metropolitan Division, and are just two points behind the Isles having played three less games. The Penguins at the Capitals are both behind the Rangers, and New York has two games and three games in hand on those teams, respectively.

Not only are they in a good position in the Metropolitan Division, the Rangers are also within striking distance of the top spot in the Eastern Conference. Tampa Bay is two points ahead of the Rangers, but have play four more games than the Rangers. Montreal, the best team in the East, is three points in front of the Blueshirts with one more game played.

So basically, if the Rangers keep playing like they have been, they could potentially be challenging for a first place seed in the Eastern Conference. With a record of 25-6-2 since December 8th, the Rangers have been climbing up the rankings.

The first period was one of the best periods the Rangers have played in the month of February. They outshot Columbus, pinning them deep inside their own end for the majority of the period, and outshooting the Jackets 14-6.

Before the Rangers got on the board, Talbot came through early, making a few huge saves early on. Talbot made a great save on Artem Anisimov in front of the net on a delayed penalty, and then stopped Alexander Wennberg’s deflection on Columbus’ ensuing man advantage. 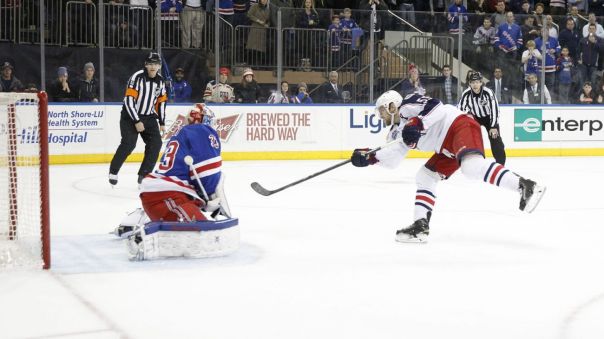 Some of Cam Talbot’s best saves came during the early staged of the first period, keeping Columbus off of the board. Photo courtesy of MSG Photos.

After Talbot came up big early, the Rangers rewarded him, with Kevin Hayes scoring his 11th goal of the season, and his fourth goal in the last seventh game. The Rangers were able to sustain a long shift in the Blue Jackets’ zone, with Carl Hagelin making a nice play to tip the puck down at the blue line and over to Hayes. He fired a wrist shot top shelf past McElhinney, giving the Rangers a 1-0 lead.

The Rangers kept the pressure on, scoring once more in the period. Martin St. Louis carried the puck into the zone, dropping it back to Derek Stepan. Stepan carried it behind the net, and passed it off to St. Louis who was off to the side of the net. His bad-angle shot beat McElhinney before he got into position, banking it off his backside and in, giving the Rangers a 2-0 lead. 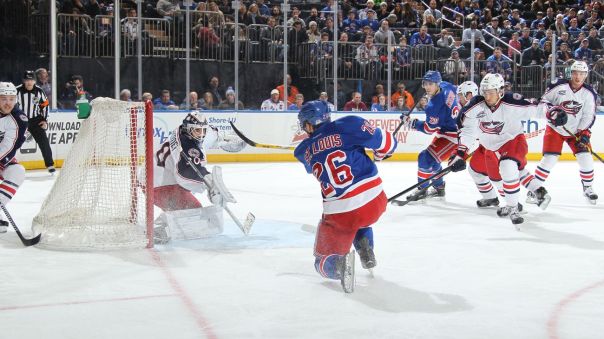 Martin St. Louis’ first goal came off a well placed shot, deflecting it off of McElhinney and in. Photo courtesy of MSG Photos.

The Rangers scored again on a beautiful set play just 1:24 in the period, and it was Martin St. Louis scoring his second goal of the game. Ryan McDonagh faked a shot, throwing the Columbus defenders off, and then fed Martin St. Louis with a fantastic pass through three skaters, and Marty put the puck into the open net. The Rangers had a 3-0 and looked like they were well on their way to a victory.

Derek Stepan picked up his second assist on the play, and now has four multipoint performances in the last five games, bringing his season total to 43 points (11-32-43) in 44 games. Since his season debut on November 8th, Derek Stepan is tied for second in the NHL in assists (32). 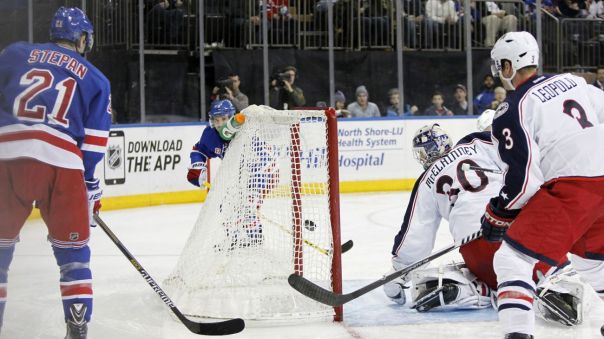 But the Blue Jackets responded less than a minute later, with Marko Danno scoring his second goal of the season to cut the Rangers lead to two. Danno was open in front of the net, one-timing a pass from Nick Foligno just under the pad of Cam Talbot.

The Rangers would have two consecutive power play opportunities in the period, but couldn’t convert. Overall, New York was 0-4 on the power play, and have not scored in their last 13 opportunities. This needs to change if they want to keep sustaining success.

Columbus would score again in the period with less than two minutes remaining, and it was the former Ranger Artem Anisimov on a fantastic second effort goal. He backhanded a shot, which was saved, was denied on his next chip-in attempt, but was able to stuff it in past the outstretched pad of Cam Talbot for his fourth goal of the season.

The third period was abysmal for the Rangers, spending almost the entirety of the 20 minutes in their own zone, and accumulating just one shot on goal after recording 30 in the first two periods. David Savard also wound up scoring in the period, a shot that Talbot just flat out missed. Suddenly, the lead was gone, and the game headed to overtime.

The Rangers nearly scored twice in the extra time, but McElhinney made two great stops on a Rick Nash deflection and a John Moore wrist shot. The game went to the shootout.

Martin St. Louis was the first to go for the Rangers, and he converted on a knuckler past McElhinney. Mark Letestu answered back with a goal. JT Miller was sent out, and nearly scored, by McElhinney made a nice save. Ryan Johansen was up next, and beat Talbot, but hit the post. Rick Nash was the third skater, making a great move to beat McElhinney. And on Cam Atkinson’s chance, Talbot timed a poke check perfectly, sending the Rangers home with two points.

It really wasn’t a game that should have went to overtime, but the Rangers found a way to fight back and come away with a crucial win in the standings.

Rick Nash did not register a goal, but he does lead the league in game winning goals plus game deciding goals in the shootout, with nine this season. 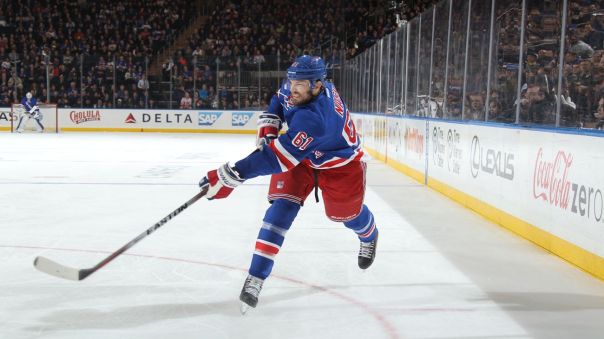 Rick Nash did not score in the game, but converted on the shootout, coming through in the clutch yet again for the rangers. Photo courtesy of MSG Photos.

The bounce back in overtime was nice from the Rangers, firing six shots at McElhinney, but Talbot and the Rangers need to work on protecting leads. Way too many times in the 10 games since Lundqvist’s injuries have there been close calls and lost leads. Although Talbot largely had a relatively solid game, it was the seventh time in his nine starts that he allowed three goals or more.

The Rangers next game will be on Tuesday night against the Calgary Flames, where the Rangers will be looking for their third straight win.