← Rangers look for season series sweep in Carolina; Talbot in net for New York
Rangers head back home to take on the league leading Anaheim Ducks →

Rangers escape with shootout win in Raleigh; Fast and Miller both score

The Rangers celebrate JT Miller’s second period goal, one of two in the period for New York as they went on to win in the shootout. Photo courtesy of Getty Images.

Despite getting outplayed for the better parts of two periods, the Rangers (45-18-7) managed to come away with a 3-2 win over the Carolina Hurricanes (26-36-9) in the shootout, capturing their 45th win of the season, the eighth time in team history that they have reached that win total.

The win gives now have 97 points this season, surpassing last year’s point total by one. They remain five points ahead of the Islanders, and are tied with the Montreal Canadiens, but have two games in hand.

The Rangers also swept the season series against Carolina, coming away with five wins in the five games they played. They have won 16 of the last 17 games against the Hurricanes, the best 17 game span versus one opponent in franchise history.

They also continue to play well away from home, posting an impressive 23-10-2 record on the road this season. At the conclusion of this game, New York leads the NHL in road wins (23), road points (48), and road point percentage (.686).

It wasn’t the prettiest win, as the Hurricanes controlled most of the first and third periods, outplaying them for a lot of the game. But the defense was solid and the goaltending was strong, helping the Rangers steal a win in Carolina.

Cam Talbot was in net for his 20th start in the last 22 games, and played well again, especially in the third period, where he stopped 16 of the 17 shots he faced. His 28 saves, and the three in the shootout was good enough for his 18th win of the season. Talbot is 14-3-3 since taking over as a starter.

Cam Talbot continues to keep the Rangers in games and steal victories, making 28 saves tonight for his 18th win of the season. Photo courtesy of Getty Images.

What also helped New York was the fact that they managed to get scoring from their depth players, as guys like Stepan, Kreider, and Nash continue to struggle. JT Miller scored the first goal in his first game on the second line, and Jesper Fast scored a gorgeous goal alongside Kevin Hayes and Carl Hagelin on the third line. The lack of scoring from key guys is starting to hurt the Rangers, but the depth guys have stepped up lately and keep helping the Rangers win games.

The game did not start out the way the Rangers had hoped, with Carolina getting on the board just 2:01 into the game. Elias Lindholm fired a slapshot that trickled through the pads of Talbot and into the net. It was one he admittedly wanted back, and the Hurricanes had an early 1-0 lead.

The Rangers really didn’t have all that many great chances, but when they did, it was usually from JT Miller or the third line. Rick Nash had a few chances, but missed wide and could not convert. New York wound up getting outshot 8-7 in the period.

The second period was where the Rangers really woke up and got going. These 20 minutes were dominated by New York, spending almost the entire 20 minutes in the Carolina zone, and outshooting the Canes 14-5.

At just 3:39 into the period, Derick Brassard won an offensive zone faceoff, getting it back to Mats Zuccarello. In a set play, JT Miller cut to the front of the net, and Zuccarello found him with a pass. Miller actually did not control the puck, but wound up deflecting it past Khudobin for his eighth goal of the season, tying the game up at one.

On a rush up the ice, Kevin Hayes carried the puck into the zone, fighting off a defender and passing the puck to Fast in the middle of the ice. The pass was behind Fast, but he managed to spin around, receiving the pass and firing a wrister top shelf for his fourth goal of the season, ending his 22 game goal drought dating back to January 3rd.

Jesper Fast celebrates with Kevin Hayes after scoring a gorgeous goal in the second period to give New York the lead. Photo courtesy of Getty Images.

New York flat out dominated this period, and headed into the locker room with a 2-1 lead. But things took a turn for the worse in the final period.  The Rangers regressed, spending almost the entire 20 minutes in their own zone defending.

Talbot made save after save, and getting some help from the post on a Victor Rask wrist shot. But the pressure was too much, and the Hurricanes wound up scoring on the power play. Ryan Murphy’s slap shot traveled through a maze of people, catching some of Talbot’s equipment, but getting past him and into the net, tying the game at 2. The game would eventually head to overtime.

In overtime, the Rangers came close to ending it when Matt Hunwick sent a wrist shot from in close and hit the crossbar. Zuccarello also had a chance in close, but couldn’t get off a shot.

He made up for it in the shootout though, coming in with speed this time and converting the only goal in the shootout. Talbot stopped all three shooters to secure the win.

It’s amazing how well the Rangers continue to play without Lundqvist for 22 games, and when they aren’t playing their best hockey. Tonight was one of those nights where they didn’t play great, but their depth, goaltending, and defense got them a big win on the road.

I’m really proud of JT Miller for stepping up in this game when given the opportunity to play with the team’s two best playmakers in Derick Brassard and Mats Zuccarello. Vigneault praised him earlier, saying he’s been working hard to become a better two way player, and saying that the team envisions him in the same role as Pouliot alongside Brassard and Zuccarello; a big, tough forward that gets to the front of the net. Miller is really growing as a player, and had a great game tonight. 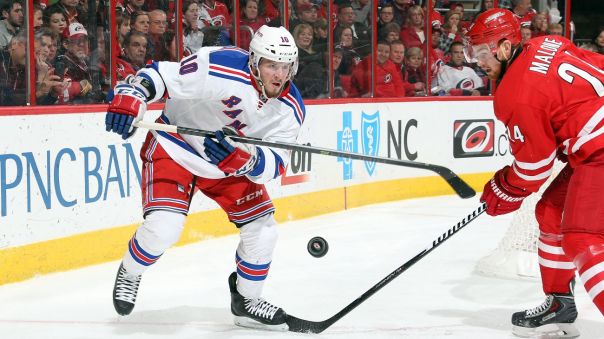 JT Miller earned the chance for bigger minutes with his recent play, and he really stepped up tonight on the second line, scoring the first goal of the game for New York. Photo courtesy of Getty Images.

The third line was tremendous tonight after Vigneault shifted Hayes back to the center position. Hayes is just a tremendously skilled and patient player, and makes great plays with the puck. Jesper Fast has been close to scoring in a lot of games recently, and his gorgeous goal tonight shows the potential that he does have. This trio will work well while Miller plays on the second line.

The Rangers will need to play much better on Sunday when they go back to MSG to take on the Anaheim Ducks, the best team points-wise in the NHL. They need to play three complete periods of hockey, or else better teams will capitalize on their chances. The lack of scoring from key guys like Nash and Stepan is starting to hurt, and they need to get going again so the Rangers can become a complete four-line team again.

The Rangers will challenge the Ducks for the top spot in the NHL Sunday Night at Madison Square Garden.

← Rangers look for season series sweep in Carolina; Talbot in net for New York
Rangers head back home to take on the league leading Anaheim Ducks →