The Rangers fell short in a battle against the Ottawa Senators, snapping their five game win streak. Photo courtesy of MSG Photos.

In the last regular season home game, the Rangers (52-22-7) were shutout by the desperate Ottawa Senators (42-26-13), dropping just their 22nd regulation loss by a final score of 3-0. Ottawa’s win wound up being huge, propelling them into the first wild card spot with, ahead of the Penguins and Bruins. Boston lost tonight, putting them in a lot of danger of missing the playoffs.

The Rangers really used this as a rest game, giving Rick Nash, Marc Staal, and Mats Zuccarello the night off. Zuccarello missed his second straight game with “general body soreness,” and Nash and Staal are day-to-day with undisclosed injuries.

That meant that Ryan Bourque and Chris Summers were recalled from the Hartford wolf pack, with Bourque making his NHL debut. Both played relatively well tonight in what was an otherwise meaningless game for the Rangers.

Henrik Lundqvist was one of the players who clearly showed up as he continues to prep for the playoffs. Lundqvist ultimately got the loss, but he stopped 24 of the 26 shots he faced. Lundqvist made some really solid saves, and continues to look sharp as the playoffs inch closer and closer. 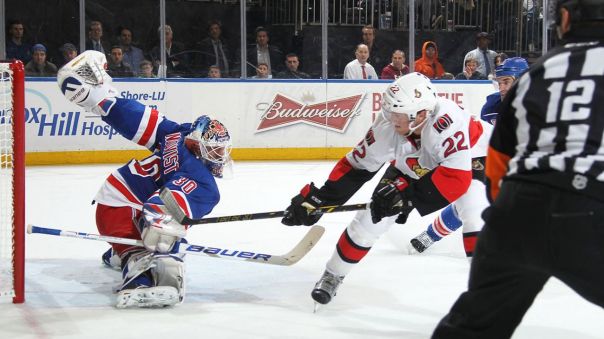 Henrik Lundqvist was sharp yet again, continuing to improve as the Rangers march towards the playoffs. Less than a week away, Henrik appears to be ready. Photo courtesy of MSG Photos.

The Rangers really dominated the first period, as it felt like Ottawa hardly touched the puck for the first half of the period. New York had some decent looks, but couldn’t finish. From that point on, there really wasn’t a whole lot that happened. The Rangers were on cruise control, just trying to get through this game with no injuries, and Ottawa was surprisingly relaxed as well for a large portion of the game.

The most notable action happened late in the second period. The Rangers best chance came after the power play expired. JT Miller sent a perfect slap pass to Kevin Hayes, throwing Andrew Hammond off balance and sending him to the ice. Hayes had to settle the pass, but he could not lift the puck high enough to score, sending the shot right into the pad of Andrew Hammond.

That wound up being the turning point for the Senators, scoring two quick goals after Hammond’s big save. Clarke MacArthur scored the first goal of the game with 2:29 remaining. Mark Stone made a great play along the boards and found MacArthur for a one timer, top shelf, in close beating Lundqvist. Just over a minute later, Kyle Turris scored on a deflection, sending the puck over Lundqvist’s shoulder. He made a nice reaction to get a glove on it, but it trickled in for a 2-0 Senators lead.

The only other goal of the game was an empty-netter scored by Jean-Gabriel Pageau late in the third period, sealing the deal for the Senators.

Let’s get this out of the way. The Rangers were not really exerting 100% effort tonight. They’ve clinched the Presidents’ Trophy, clinched a playoff spot, and gave the guys a night off. This team has played a lot of hockey in the last two seasons, and some players really deserve a bit of rest.

I thought Ryan Bourque played relatively well in his debut. The fourth line, alongside Dominic Moore and Jesper Fast, spent a lot of time in the offensive zone, and Bourque nearly scored on a good wrist shot. He fit in really well, and had a pretty solid game overall. It was special for him to make his NHL debut at MSG, and he certainly made the most of it tonight.

Ryan Bourque, son of the legendary Ray Bourque, made his NHL debut tonight. In just over 11 minutes, he played a pretty solid game, fitting right in with the Rangers style of play. Photo courtesy of MSG Photos.

The third line played well again. Hagelin, Hayes, and St. Louis continue to grow together, and should make for a good line come playoff time.

The Rangers will play their final game of the season on Saturday in Washington D.C. when they take on the Capitals in a matinee matchup.