← Rangers pick up a win at home in a battle of goaltenders
Rangers blanked in D.C. despite stellar performance from Lundqvist → 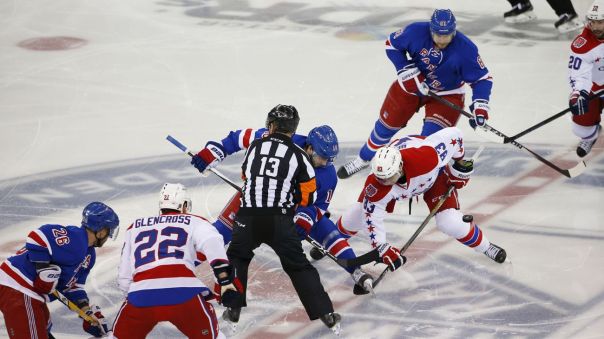 The Rangers and Capitals will head to the Verizon Center for the first time in this series, a building where the Rangers won twice this season. Photo courtesy of MSG Photos.

After tying the series at one, the New York Rangers and the Washington Capitals head to the Verizon Center to continue their battle for a very important Game 3, and the first road game in the series for the Blueshirts.

Throughout the season, the Rangers have been a very strong road team, finishing with 28 road wins in the regular season, the most in the NHL. Two of those wins were in Washington D.C., with New York taking down the Capitals by 3-1 and 4-2 scores. They also won both games in Pittsburgh in Round 1. Alain Vigneault’s squad is very comfortable playing away from home, and tonight should be no different.

The Rangers were given Sunday off to rest and heal for tonight’s game following a full practice on Saturday. On the other hand, the Capitals were practicing yesterday after getting Saturday off. Regardless, both teams are ready to continue their hard hitting, action packed Eastern Conference Semifinals matchup.

The game plan for the Capitals when it comes to offense continues to be top line or bust. Yes, Evgeny Kuznetsov, the second line center, scored a goal in Game 2, but that line wasn’t very active for the remainder of the game. The trio of Ward, Backstrom and Ovechkin was on the ice for most of the game, and that was the line that generated most of their quality chances.

Alex Ovechkin continued his strong play, scoring a sensational goal in the third period and getting robbed by Henrik Lundqvist’s glove in the first. It’s been said multiple times, but he remains the focal point of Washington’s offense, as well as the main target for Rangers’ defensemen.

Evgeny Kuznetsov scored on a rebound in Game 2, giving the rookie center four goals in eight playoff games this season. Apart from the top line, he’s one of the more talented forwards on the Capitals, and should be watched carefully. Their second line, mostly quiet in the first two games, can certainly be a threat, especially with 20 goal scorer Marcus Johansson and the speedy Jason Chimera on the wings.

The Rangers did a much better job of getting guys in front of the net in Game 2, something they struggled with in the first game. Chris Kreider scored on a rebound after Fast and he crashed the net, and Dan Boyle scored a power play goal with Rick Nash providing the screen. Holtby still had a very good game, denying other quality opportunities, but the Rangers showed that he can be beaten.

Dan Boyle’s shot from the point traveled through a screen from RIck Nash for the second goal of the game. Puting bodies in front of Holtby will certainly help lead to more goals. Photo courtesy of MSG Photos.

The last nine Rangers’ playoff games have been decided by one goal, dating back to Game 3 of the Stanley Cup Finals last season. A lot of that has to do with the play of Henrik Lundqvist, who will be playing in his 100th career postseason game, moving past Tony Esposito for sole possession of 19th place for most playoff appearances by a goaltender.

Lundqvist was absolutely spectacular in Game 2, making numerous highlight reel saves to keep the Rangers ahead of Washington throughout the game. He finished with 30 saves, securing the win in one of his best playoff performances in recent memory. He will always be a key to the Rangers’ success, but even more so when going up against another great goaltender in Braden Holtby.

Despite not scoring a goal in Game 2, Rick Nash had one of his best games in the playoffs. The Capitals were unable to contain his size and speed, with Nash consistently getting to the dirty areas, having some solid chances, and picking up an assist on the play. Yes, the Rangers do need his goal scoring ability, but he brings so much more to the table.

In fact, Rick Nash has been on the ice for seven of the Rangers 15 goals in the playoffs. He’s assisted on four of them, and like on Dan Boyle’s goal, he’s helped create the other ones. Also, his postseason shooting percentage has plummeted to just 3.3%, but he’s averaging 19.7 shots per 60 minutes in the playoffs. This may be indicative of missed opportunities, but it’s also showing that he isn’t getting the same bounces that he normally does. His presence opens up the ice for other players, and he’s one of the best two-way forwards in the league. The goalscoring will come, hopefully soon, but he’s still doing a lot to help the Rangers win. 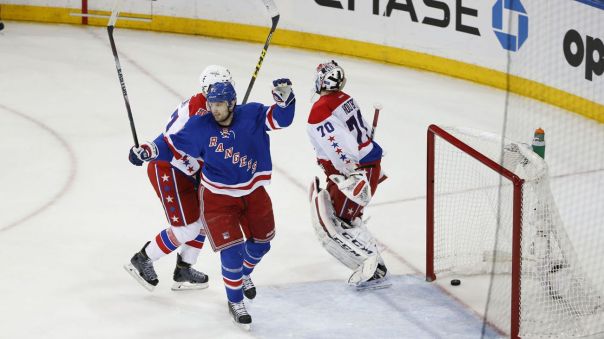 Rick Nash has been a dominant force on the ice this season, and has carried that success over into the playoffs. He’s been on the ice for half of the Rangers’ goals, assisted on four, scored one of them, and has created opportunities for other players to score. Photo courtesy of MSG Photos.

Prior to game two, Alain Vigneault decided to shuffle the lines a bit, something he does normally to try and build chemistry. By switching Jesper Fast to the second line with Derek Stepan and Chris Kreider, he may have found something special.

The Rangers’ second line of Stepan centering Kreider and Fast was easily the Rangers best line in the game, creating tons of chances, making crisp passes to the open man, and sending Kreider on a few breakaways as well. They were constantly pressuring the Capitals, rarely playing in their own zone, and Fast fit in very nicely on the right win. His offensive skills, while still developing, are definitely there, and he’s a very responsible defensive forward. Fast is coming into this game with a two game point streak (1-1-2), and newfound confidence on the second line

The Rangers and the Capitals will faceoff at the Verizon Center at 7:30 PM. The game will be broadcasted on NBCSN.

← Rangers pick up a win at home in a battle of goaltenders
Rangers blanked in D.C. despite stellar performance from Lundqvist →