The Rangers are in a must win situation again on Sunday Night, this time in DC, where the Capitals will be pushing hard to close out the series. Photo courtesy of MSG Photos.

After an emotional comeback win at Madison Square Garden in Game 5, a game that saw the Rangers tie the game up with less than two minutes remaining and then win in overtime, the Blueshirts are back at it on Sunday Night, looking to extend their season again in a must-win Game 6 at the Verizon Center. They currently train the series three games to two.

With their backs against the wall, New York managed to get the win at the Garden, continuing their strong play overall throughout the series. Ryan McDonagh’s overtime goal gave the Rangers a chance to play one more hockey game, to get one more win and take it back to Madison Square Garden for a decisive Game 7.

The Rangers were the hungrier, more desperate team in Game 5, getting pucks to the net early and playing with speed and aggression. But the team will have to up their play on Sunday, simply because the Capitals will be a much more desperate team this time around. The Capitals do not want to let a series lead slip from them, and they’ll certainly be trying to close out the series in front of their fans.

The Rangers have played very well in this series, with more shots on goal and scoring chances than the Capitals in nearly every game, but frequently getting shut down by netminder Braden Holtby. They were finally rewarded for their hard work on Friday, getting two bounces for wins. Krieder’s goal went off of a skate, and McDonagh’s goal drastically changed direction after deflecting off of Tim Gleason and into the net. New York had not gotten any bounces to go their way in the first four games, so it was nice to see them get some puck luck of their own. 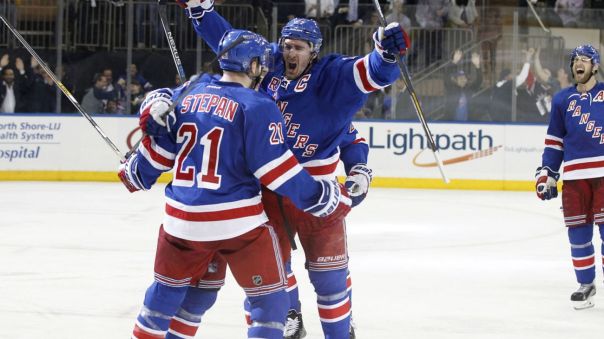 Ryan McDonagh’s game winning goal in overtime deflected off of a defenseman and into the net, with the Rangers finally getting some bounces to go their way. Photo courtesy of MSG Photos.

With the Capitals getting ready to really push hard and challenge the Rangers, expect Alex Ovechkin and the top line to be very hungry. The Rangers have done a good job of limiting Alex Ovechkin’s effectiveness, holding him to no points in the past three games, including just two shots on goal on Sunday.

Nicklas Backstrom has largely been a nonfactor in this series. After carrying his team through the first round past the Islanders, Backstrom has just one assist in the five games against the Rangers with just six shots on goal, despite averaging over 20 minutes a game. Both Ovechkin and Backstom will likely be more effective in this game as the entire team pushes hard to close out the series.

The Rangers will need to play just like they did on Friday in order to win. They matched the Capitals physicality with guys like Tanner Glass and Chris Kreider, blocked more shots than Washington, all without sacrificing their offensive game. Instead of trying to be too “cute” and set up the perfect play, shots were thrown on net, leading to all sorts of chances. They also had more traffic in front of the net, and finally got some bounces to go their way, scoring both goals on deflections off of Capitals skaters. If it wasn’t for a virtuoso performance from Braden Holtby, there could have been five goals in the game.

Henrik Lundqvist will need to match the performance from Braden Holtby, something that he has been able to do for the entire series. On Friday, Lundqvist was superb, stopping 13 shots in the first period and finishing with 28 for the game. He’s been good in elimination games, with a 9-2 record in the past 11 games when his team is facing elimination. The Rangers need him to bring his A-game again tonight at the Verizon Center.

After making the turnover that led to the game winning goal in Game 4, Ryan McDonagh responded just as a captain is supposed to do, scoring the game winning goal in overtime and playing very strong defensively throughout the game. He led the team with over 25 minutes of ice time, and has two goals in the playoffs, both game winners. He’ll need to be strong on both sides of the rink again if the Rangers want to succeed.

Chris Kreider was rewarded for his strong play throughout the series with a goal at 18:19 of the third period, which sent the game into overtime. He has been one of the best players on the new dynamic second line, constantly pressuring the Caps with his speed and generating scoring chances. Alongside Derek Stepan, who had two assists in Game 5, and Jesper Fast, Kreider can cause some serious damage. Look out for this line in tonight’s game.

Chris Kreider has been a force throughout the series, using his size and speed to get to the net and create scoring chances. Photo courtesy of MSG Photos.

The Rangers will need to match the Capitals aggression and desperation as the home team tries to close out the series tonight. This is going to be the real test, potentially the hardest game in a potential comeback. The Rangers must be up to the challenge.

The Rangers and Capitals will faceoff at the Verizon Center at 7 PM. The game will be broadcasted on NBCSN.