← Rangers and Caps set for another classic Game 7 matchup at the Garden
Series Preview, Round 3: Rangers vs. Lightning → 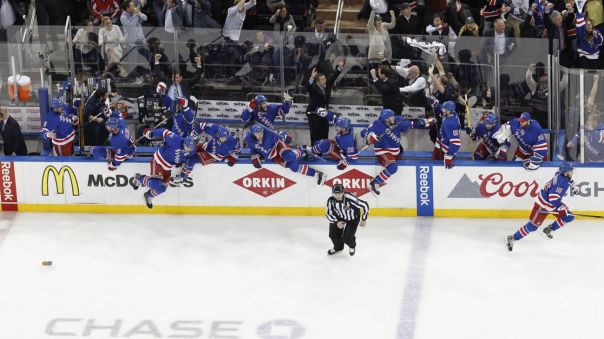 The Rangers’ players and coaches celebrate after Derek Stepan scores the overtime winner, sending the Rangers to the Eastern Conference Finals for the second consecutive year. Photo courtesy of MSG Photos.

The Rangers are back in the Eastern Conference Finals baby!

Despite trailing the series three games to one, the Rangers managed to complete the comeback, winning Game 7 at home thanks to a Derek Stepan overtime winner. They are back in the Conference Finals for the second consecutive year, and the third time in four years.

The Rangers became the first team in NHL history to come back from 3-1 series deficits in consecutive years. Last year, the Rangers faced a 3-1 series deficit against the Pittsburgh Penguins, but were able to overcome that to advance to the Eastern Conference Finals.

The Rangers also extended their win streak to 10 consecutive wins when facing elimination at Madison Square Garden. They are also 7-0 in franchise history in Game 7s on home ice.

The Rangers received an outstanding 35 save effort from Henrik Lundqvist, continuing his clutch play when his team needs him most. Lundqvist became just the third goalie in NHL history to win six Game 7s, tying the legendary Martin Brodeur and Patrick Roy. In those games, he has a .81 GAA and a .973 save percentage. 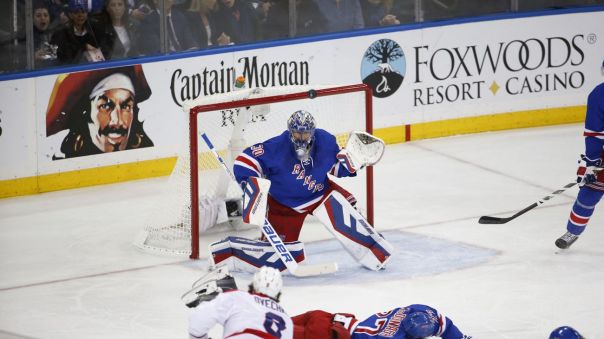 In Lundqvist’s last 10 elimination games at Madison Square Garden, he is undefeated, posting a microscopic .96 GAA and a .968 save percentage. Tonight was no different, allowing one goal on 36 shots, standing on his head in the overtime period, and coming through in the clutch when the team needed him most.

You have to tip your hat to the Washington Capitals. This series is going to go down as one of the most memorable in recent memory, and will be one of the Rangers’ classic series, especially this Game 7. This could also be one of the best playoff goaltending duels of all time. Braden Holtby allowed just 13 goals with a .944 save percentage, and Henrik Lundqvist allowed 12 goals with a .944 save percentage. Every game was extremely close, and the goalies were phenomenal throughout. 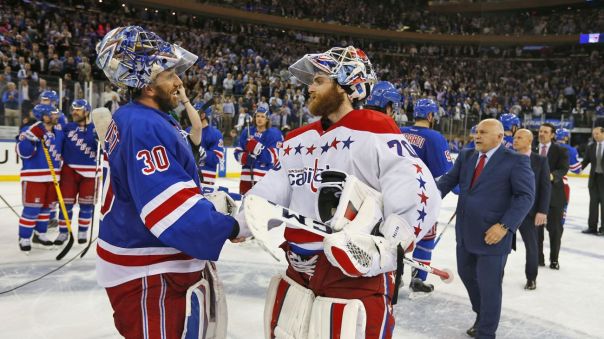 Henrik Lundqvist and Braden Holtby battled for seven games, providing arguably one of the best goaltender duels in a playoff series in NHL’s history. Photo courtesy of MSG Photos.

Coming into Game 7, we all knew it would be close. We knew it would likely be a one goal game. But this was just about as even as this game could get. No team dominated play for an extended period of time. The momentum kept swinging back and forth, the shots were very close, the chances were even, and both goalies were outstanding. For a Game 7, it didn’t get much more exciting, nerve-wracking, and intense as tonight.

From the get-go, both teams were very physical and defensive, not giving each other any space to work with. Henrik Lundqvist showed off his goaltending skills early, stopping Burakovsky’s bouncing knuckler of a shot, and then stretching out the left pad to deny Beagle on the rebound. He would go on to finish the period with 14 saves.

The Capitals would open the scoring in the game, and it was Alex Ovechkin backing up his talk with a goal of his own, his fifth of the playoffs. The Capitals won the faceoff, and Ovechkin kept the puck alive along the boards, working it to Nicklas Backstrom. He then passed it off to Marcus Johansson, who made a terrific backhand pass to Ovechkin, beating McDonagh to the front of the net and firing wrister over the glove hand of Henrik Lundqvist, giving the Capitals a 1-0 lead at 12:50 of the first period.

The Rangers best chance of the period came shorthanded, when Derek Stepan poked a pass into the neutral zone for Rick Nash on a breakaway. Nash tried to go backhand five hole, but Holtby made a great stick save to keep the Rangers off of the board.

The Capitals took a penalty with about 30 seconds left in the period, and that would set the tone for the beginning of the second period. They didn’t score on the initial power play, but they got another chance when Mike Green was sent to the box for holding. Derick Brassard hit the post, but no goal. But Mike Green took another penalty, this time an interference. And the Rangers finally broke through.

JT Miller carried the puck into the zone, and fired a wrister that was shouldered away by Holtby. The Capitals tried to clear it, but McDonagh kept the puck in and passed it back to Miller, who stayed with the play. Throughout the play, Kevin Hayes hovered behind the opposite faceoff circle alone, waiting for a play. While JT Miller drew all of the attention, Hayes cut to the net, and Miller made a tape-to-tape pass to Hayes for a tap-in, his second goal of the playoffs. 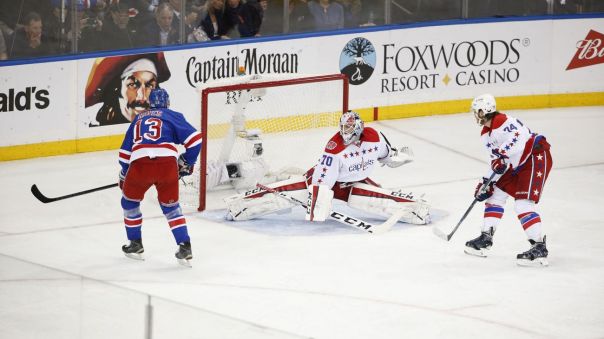 Kevin Hayes redirected a perfect pass from JT Miller past the outstretched pad of Braden Holtby, tying the game at one goal a piece in the second period. Photo courtesy of MSG Photos.

Hayes became the first Rangers’ rookie to score a Game 7 goal in the playoffs since 1939.

That goal motivated the Rangers, pushing them to generate more scoring chances. Eventually things quieted down, and both teams played a bit more conservatively. In the third, there were only three shots in the first 7:13, but the Capitals kept winning faceoffs, prompting them to continue their dump and chase style of play.

In the third period, Brooks Orpik made a dangerous hit on Dan Boyle, sending him to the locker room for the rest of the game. Boyle was skating the puck into the Capitals zone, with his head up, and Orpik came in hard, seemingly leaving his feet early, and machining initial contact with the head of Boyle. He was left down on the ice, and wobbly when he tried to stand. It should have been a penalty, but it was missed, and the game went on.

When overtime began, the entire game changed. Everything was more wide open, with chances galore on both sides. The Capitals had most of the pressure, but the Rangers defensemen, and Henrik Lundqvist, managed to keep the Capitals from scoring on their eight shots in the period.

Despite being back on their heels for a large portion of the overtime period, the Rangers had an offensive zone faceoff with 8:42 left to go. The faceoff resulted in a tie up, but Jesper Fast got it back to Yandle. Yandle passed it to Dan Girardi for a one timer that was stopped by Holtby’s pad, but sent him to the ice after a big rebound, which went right to Derek Stepan. His wrist shot found twine, blew the roof off of the Garden, and sent the Rangers to the Eastern Conference Finals. 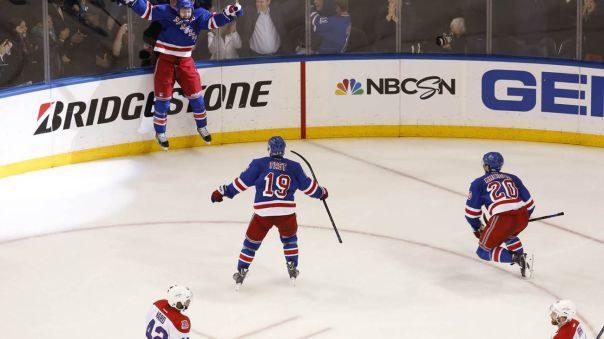 Derek Stepan celebrates after scoring the game winning goal to send the Rangers to the Conference Finals. Photo courtesy of MSG Photos.

Stepan’s overtime winner was the first for the Rangers in a Game 7 since the fampus Stephan Matteau goal in double overtime against the New Jersey Devils in the 1994 Eastern Conference Finals. Just call him “Stepan Matteau.”

The mantra for the Rangers throughout the season has been that they find a way to win. No matter the circumstance, they seem to find a way to come back and win. Games, series, periods, it doesn’t matter. They’re always in the game, and they tend to find out how to win more often than not.

The second line that Alain Vigneault put together is absolutely gold. Derek Stepan centering Chris Kreider and Jesper Fast. A line that really would not have seemed likely in the regular season, but one that has been outstanding in the playoffs. The speed of Fast really complemented the line nicely, Kreider was the best player not named Lundqvist in this round, and Derek Stepan is an all-around very good center. Stepan works hard for his chances, and he earned his goal tonight. It was a great game from that line and from Stepan himself, who is tied for the team lead with eight points (3-5-8).

Kevin Hayes had his best game of the playoffs tonight, looking like the Hayes that was streaking through the second half of the season. The playoffs are a different animal than the regular season, so taking him out of the center role and placing him back on the wing, taking some responsibility from him, has really helped. Dominic Moore is no slouch either, and has been really good as the third line center. Hayes is an important depth player, and when he is on, he can have a big impact like he did tonight.

Jesper Fast has grown into one of the most important players on this team. Always a defensively responsible player, he’s now getting the chance to showcase his offensive skills on the second line. He’s been on the ice for all four overtime winners, playing an important part in all of them. He played over 21 minutes in Game 7, and is growing to earn the trust of Alain Vigneault. Fast is exactly the type of depth player that the Rangers need in the playoffs.

I strongly suggest you look through all of the photos from tonight’s game HERE. There are some pretty fantastic shots in here.

← Rangers and Caps set for another classic Game 7 matchup at the Garden
Series Preview, Round 3: Rangers vs. Lightning →