← Rangers need a more disciplined effort in Game 3 on the road
Zuccarello resumes skating, shooting drills; Have faith in Henrik → 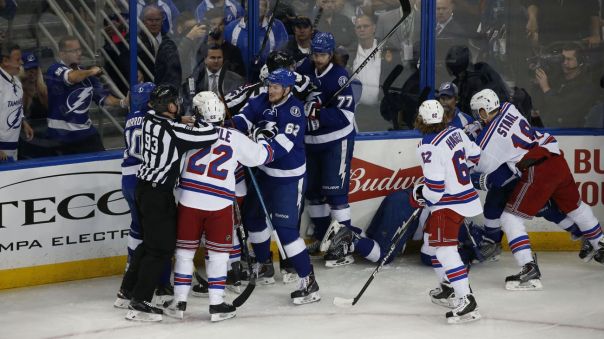 It was a chippy, fast, high scoring game at the Amalie Arena. And the Lightning came away with a 6-5 win in overtime. Photo courtesy of MSG Photos.

In a wild back and forth game between at Amalie Arena, it was Tampa Bay that came out on top, scoring a shocking goal in overtime to ward off a Rangers comeback, and come out on top with a 6-5 overtime victory. Prior to this loss, the Rangers were 60-0-0 since the 2010-11 season when scoring five goals, in both the regular season and playoffs, yet they could not get the win tonight.

For the second consecutive game, the Rangers’ defense was atrocious. Tampa Bay’s forwards and defensemen just walked through the Rangers at the blue line, out shot and out chanced New York, and had more shot attempts. The defense did nothing at all to help out Lundqvist or the rest of the team, missing defensive assignments, giving up bad turnovers and allowing too many high scoring chances.

The problem in this game is that the Rangers are getting into a track meet. The game is way too wide open for them to keep up with the Tampa Bay Lightning forwards, especially with all of the speed and skill that they have. The Rangers would be better off controlling the pace of play, limiting the speed of the Lightning forwards, and using their quickness when the ice opens up for them.

The Rangers have now allowed 12 goals in the last six periods, which is highly uncharacteristic of this defensive minded team. Guys like Ryan McDonagh and Dan Girardi have played poor, and Henrik Lundqvist was off his game as well.

Lundqvist faced 40 shots in this game, and just like in Game 2, Henrik was hung out to dry. Way too many Tampa Bay Lightning skaters were wide open for chances, meaning it was all up to Henrik. He made some good saves, but not enough that he needed to. And on the game winner, Henrik has to stop that puck. A harmless 40 foot wrister wound up being the winner for Tampa Bay. 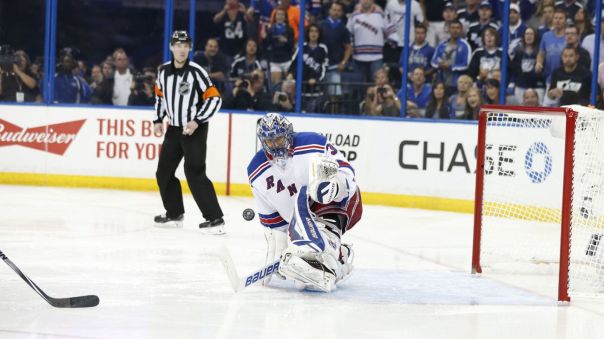 Henrik Lundqvist made some big saves throughout the game, but was beat on an easy wrister in overtime. Henrik, and the entire defense, needs to be much better in Game 4. Photo courtesy of MSG Photos.

The Lightning now have scored five or more goal against Lundqvist five times over the course of this season. Their forwards are getting to the middle of the ice and getting really good looks. This is just the second time in Lundqvist’s career that he’s allowed four or more goals in back-to-back playoff games. The last time was in Game 5 and 6 against the Capitals in 2009.

But Lundqvist is certainly not the biggest reason why the Rangers lost that game. At all. It all goes back to the poor defensive coverages and breakdowns. Yes, Lundqvist has to stop the game winner, but apart from that, he was all alone on an island and left to fend for himself. Lundqvist actually made quite a few fantastic saves that kept the Rangers in it. His team let him down again.

It’s a shame that the defense was so bad, because Ben Bishop was horrible. “Big Ben’ allowed five goals on just 26 shots, was caught out of position on numerous occasions, and didn’t really make any good saves that helped keep his team in the game. The Rangers have proved that Bishop is beatable. They just need to stop making so many mistakes.

The “Triplet” line, consisting of Nikita Kucherov, Tyler Johnson and Ondrej Palat, are absolutely dominating the Rangers in the first three games. They added another four goals, including the game winner. and three assists tonight, and did whatever they want on the ice. Ryan McDonagh and Dan Girardi were paired against the triplet line, but they still controlled the puck whenever they were on the ice. Something needs to be done, and fast, because these three are wreaking havoc.

And Steven Stamkos and Alex Killorn are turning into quite the duo on the top line. Stamkos had the first Lightning goal, and Killorn also had a goal and a helper with a team high nine shots on goal. Again, Marc Staal or McDonagh and Girardi are always paired against these two, and they too still manage to find ways to score and facilitate offense.

Jesper Fast is one of the few Rangers who can come away feeling good about how he played. Fast had his first career two goal game, scoring a beautiful breakaway goal and then positioning himself perfectly to score on a rebound at the end of the second period. Fast was extremely effective throughout the night, using his speed and good passing to facilitate offense on the second line. He’s been working extremely hard, and earned a game like tonight. Fast has been one of the best Rangers in the playoffs since the second round. 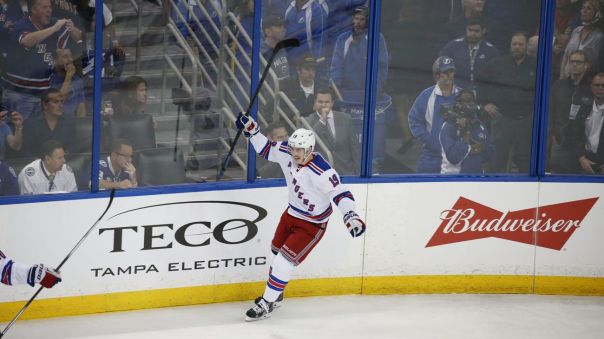 I thought the fourth line was actually really good early on. James Sheppard had a great first two periods, finishing his checks, playing strong with the puck and against the boards and setting up some chances. Tanner Glass was inches away from tapping in a puck that was loose in the crease, and JT Miller was eventually bumped up to the top line. They didn’t play together much late, but it was a good showing from them.

Guess who were the two best defensemen again today? Keith Yandle and Dan Boyle. Like I said in previous posts, they thrive in this up-tempo style of play. Yandle actually managed to finish with a +2 rating with two assists, and Dan Boyle had an assist and a goal, which tied the game at 5 with just 1:56 remaining in the game. Boyle still had a few defensive lapses, but when compared to everyone else, he was one of the better players. Keith Yandle and Jesper Fast were probably the two best players on the ice.

The Rangers had about as good of a start to the game as they could have hoped for, scoring just over a minute into the first period. Cedric Pacquette took an ill-advised roughing penalty. New York cycled the puck beautifully on the man advantage, eventually going to Brass above the left faceoff circle. He was given a lot of time and space, and blasted a slap shot into the upper corner. The assists went to Derek Stepan and Dan Boyle. 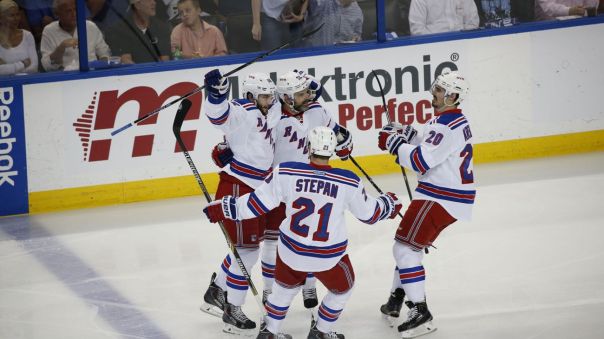 The Rangers celebrate after Derick Brassard blasts home a power play goal just over a minute into the game. Photo courtesy of MSG Photos.

With the goal, Derick Brassard now has 10 points (6-4-10) in three consecutive playoffs for the Rangers. He’s just the second blueshirt to accomplish that feat, and the first since the legendary Mark Messier.

The Rangers would add another goal in the period, which was Jesper Fast’s first of the game. Following a good save from Lundqvist, the Rangers controlled the puck. Derek Stepan and Matt Carle collided in the neutral zone, and Anton Stralman went for a change, leaving the Bolts without any active defensemen. Ryan McDonagh passed it to Chris Kreider at the blueline, and he made a fantastic saucer pass to a streaking Fast. He faked a shot on his forehand, transitioned it to his backhand and elevated it over the pad of Ben Bishop. The Rangers led 2-0.

But Tampa Bay would answer back, and it was the captain Steven Stamkos. He started the rush by bodying Dan Boyle and lifting his stick to take the puck. A pass to Killorn for a shot was foiled by the backcheck of Ryan McDonagh, and Lundqvist weakly pushed the puck right onto the stick of Stamkos. Tampa Bay was within one goal.

The Lightning would score three consecutive goals in the third period following a strong start from the Rangers. The first was a power play goal from Ondrej Palat. Brass was called for a lazy hooking penalty, giving Tampa a power play. Palat carried the puck into the zone, passed it to Tyler Johnson, who passed it right back to Palat going to the net. His wrist shot deflected off of Dan Girardi’s stick as he was backchecking and past Lundqvist.

Tyler Johnson scored his 12th goal of the playoffs just a few minutes later. Ondrej Palat saucered a puck from behind the net to Johnson for an easy tap in. Chris Kreider and Kevin Klein miscommunicated on the play, leaving Johnson completely uncovered.

Then Alex Killorn scored a few minutes after that goal. Marc Staal missed the net on a shot in close and Tampa went on a 2-on-1 the other way. Killorn made an unbelievable toe drag move to get past Dan Boyle and Marc Staal, and fired a wrist shot top shelf. The Lightning led 4-2.

Jesper Fast cut the lead to just one a few minutes later. Derek Stepan fed Kevin Klein from behind the net for a one timer, which was stopped by the pad of Bishop. Fast was positioned perfectly, and placed a wrister over the shoulder of Ben Bishop, and the score was now 4-3 in favor of Tampa. 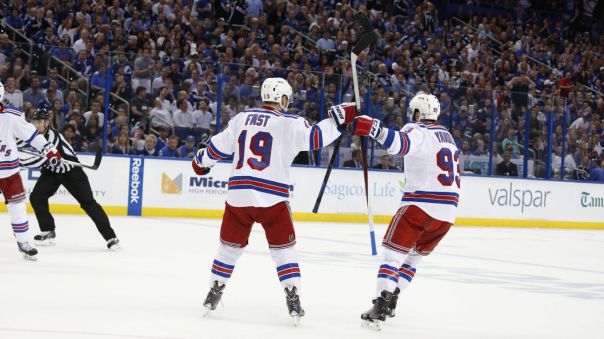 To start the third, the Rangers scored another power play goal, this one from Ryan McDonagh. Keith Yandle passed it to Kevin Hayes, who made a tremendous pass through three Lightning players and over the royal road. McDonagh collected the puck, wrist shot top shelf, and it was all tied at 4.

With 5:55 remaining, Ondrej Palat scored his second goal of the game. Chris Kreider was angry about a hit in the offensive zone, and came in to make a hit, putting him out of position. Palat cut to the front of the net and made a great move to beat his defender, and deposit the puck past the right pad of Henrik Lundqvist.

Following an icing, the Rangers won the faceoff and got to work. Keith Yandle shot the puck from the point, and it was deflected by JT Miller. Miller than tapped the puck over to Dan Boyle in front of the net, and he put it into the back of the net with 1:56 remaining in the third. The game would go to overtime.

In overtime, the Rangers had a good start, but the Lightning slowly started to pick up their play. Nikita Kucherov carried the puck into the Rangers’ zone, shot a wrister at Henrik, and he misjudged it, allowing it to sail past him for the game winning goal. The Lightning now have a 2-1 series lead with Game 4 on Friday Night in Tampa Bay.

← Rangers need a more disciplined effort in Game 3 on the road
Zuccarello resumes skating, shooting drills; Have faith in Henrik →