← Kevin Hayes destined for success in New York
The Stepan Situation May Reach Arbiration, and Kevin Hayes is a big reason why →

The Rangers need to get creative and go with a different look on the fourth line. Photo courtesy of MSG Photos.

All of the glory and attention goes to the top lines in the NHL. On the Rangers, the likes of Rick Nash, Chris Kreider and Derick Brassard get the fans talking, because of their exciting ability to create offense and score goals.

The importance of the fourth line is often brushed aside, with many people not realize how important a team’s bottom six depth can be when making a long run in the playoffs. Having a great fourth line can be the difference between an early exit and a Stanley Cup Championship.

Looking back at the 2013-14 season, when the Rangers made it to the Stanley Cup Finals for the first time since 1994, the bottom six was tremendous. Benoit Pouliot, Derick Brassard and Mats Zuccarello were probably the team’s best offensive line for large parts of the season and playoffs.

But the trio of Derek Dorsett, Brian Boyle and Dominic Moore was absolutely amazing through all four rounds of the playoffs, handling all of the tough defensive minutes and contributing offensively as well. Going up against players like Claude Giroux, Sidney Crosby, Evgeni Malkin and Marian Gaborik was no problem, with the fourth line able to limit their offensive capabilities.

When they weren’t handling most of the tough, defensive zone shifts, they were actually scoring too. Between the tree of them, they combined for 17 points, with the most memorable being Dominic Moore’s Game 6 winner against the Montreal Canadiens.

This season, the Rangers were clearly lacking that same dynamic, with the fourth line really struggling in the early parts of the season. Although they did play somewhat better in the playoffs, Vigneault was missing a line that could match up against other team’s top lines and give easier shifts to guys like Rick Nash. Because they struggled to generate offense, and couldn’t get the puck out of their own zone, the top nine were forced to focus less on offense and take some of the defensive shifts as well.

On top of getting run through by the Lightning’s speedy, skilled forwards, the fourth line combined to score just six points, and Dominic Moore had half of those points. It wasn’t nearly enough from that line, and it did make a difference on the Rangers playoff performance.

This offseason, the Rangers have made some steps towards a better bottom sixth depth, and more importantly, a better fourth line.

First and foremost, Dominic Moore wasn’t the problem at all. He had 10 goals and 27 points in the regular season, and did all he could in the playoffs. The problem was that he was paired with teammates that weren’t all that good. Tanner Glass is a possession nightmare, and can often be caught out of position. With Mats Zuccarello injured, Jesper Fast was forced to move up in the lineup, and James Sheppard came into replace him. Sheppard and Glass were not very effective at all in the playoffs. 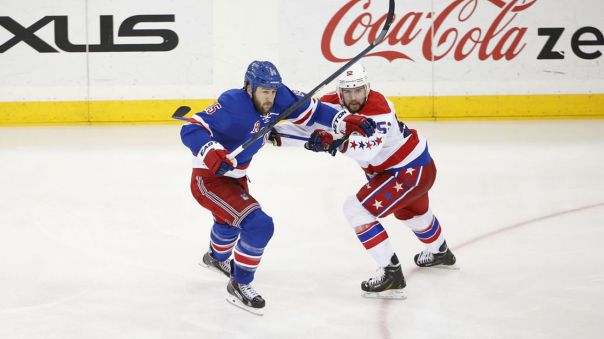 Tanner Glass had just seven points in the entire hockey year, and did not contribute much to the Rangers lineup. Photo courtesy of MSG Photos.

So far, Jeff Gorton has made moves to ensure that the bottom six will look different, and that they’ll be able to do a better job than last year.

The first was signing Viktor Stalberg, who was bought out of his final two years of his contract with the Nashville Predators. Stalberg dealt with injuries in this past season, and spent time in the AHL as well. Stalberg played all six of Nashville’s playoff games, scoring three points (1-2-3).

Stalberg has great speed for a big man, and his size will be extremely beneficial in front of the net. On top of that, he’s an excellent defensive forward, posting very strong possession numbers as well. He could play a top-nine role for sure, but Vigneault may decide to utilize his defensive strengths with Dominic Moore on the fourth line.

Jesper Fast signed his qualifying offer with the Rangers, meaning that he will be back to bring his great defense, penalty kill and offensive upside to the fourth line. If Fast moves up in the lineup, perhaps to the third line, then Oscar Lindberg could finally get his chance in the NHL. Like Fast, he is a Swede with high hockey IQ, responsible in all three zones, and he can also play center and win faceoffs when needed.

As much as I hate to rip on one player, Vigneault needs to finally remove Tanner Glass from the lineup, or bury him in the AHL. He rarely ever contributes anything offensively, isn’t fast enough or positionally sound enough in his defensive coverage, and he does not bring much to the lineup. Sure, he’s physical, but it comes at the expense of skill. The Rangers have players who can be aggressive and physical, but also contribute in other areas of the game.

Stalberg and Lindberg would be immediate upgrades over Glass, and when paired with Moore and Fast, the Rangers could have an effective, dependable fourth line now. Not only would they be able to score goals, with Fast and Stalberg’s speed and Moore’s sneaky passing skills, but their defensive prowess would help take pressure off of other lines. By handling the tough minutes against other team’s top lines, Nash and others will have more chances to just do their thing with the puck.

Gorton took the right steps towards addressing the bottom six depth, bringing in a guy like Stalberg and signing Lindberg to an extension. It’s up to AV to do the right thing, and go with a new look fourth line.

← Kevin Hayes destined for success in New York
The Stepan Situation May Reach Arbiration, and Kevin Hayes is a big reason why →