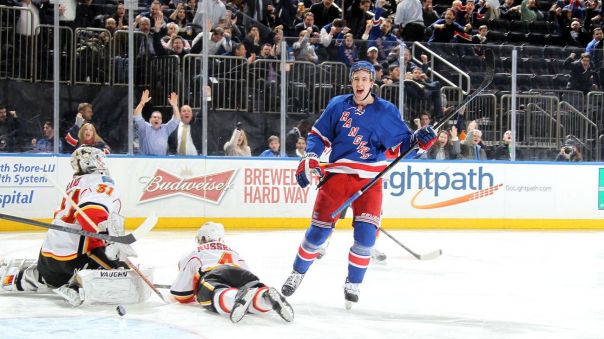 Kevin Hayes will be entering the second season of his NHL career, but will he fall victim to the dreaded Sophomore Slump? Photo courtesy of MSG Photos.

The sophomore slump. The fear of all second-year NHL players as they continue their career. Whether it actually exists, or it’s all mental, it’s happened to quite a few players before.

For example, Nathan McKinnon scored 10 less goals and 15 less assists this season after capturing the rookie of the year award for the 2013-14 season with his 63 point (24-39-64) season. Jonathan Huberdeau had a strong showing with 14 goals and 17 assists in the lockout shortened 2012-13 season, but failed to match that mark the next year despite playing in 69 games. However, he finished this last season with 15 goals and 39 assists, and is starting to show flashes of what the Panthers saw in his rookie season.

The Rangers have a few second year players in their lineup, such as JT Miller and Jesper Fast, but perhaps the most important one is Kevin Hayes, the big man out of Boston College.

The Rangers were the team that was lucky enough to sign Hayes last offseason after he declined to sign a contract with the Chicago Blackhawks, the team that drafted him in 2010. The deal was two years, with a $900,000 salary per year, and a potential $2.85 million each year in performance bonuses.

Entering his first ever NHL training camp, competing against other young players and NHL veterans, Hayes beat them out for a spot on the opening night roster. While he wasn’t offensively potent in his first handful of games, he never looked like he didn’t belong in the NHL.

Around December, when the Rangers starting winning like crazy, Hayes was fantastic, leading all Rangers’ players in points during the latter half of the season. Despite his size, which helps him in a lot of areas of the game, what stood out about him was his hands, his ability to maintain puck possession, and his ability to create offense for whoever he happens to be on the ice with.

His teammates quickly noticed that he wasn’t your ordinary NHL rookie, praising him for his abilities and transition into the league. 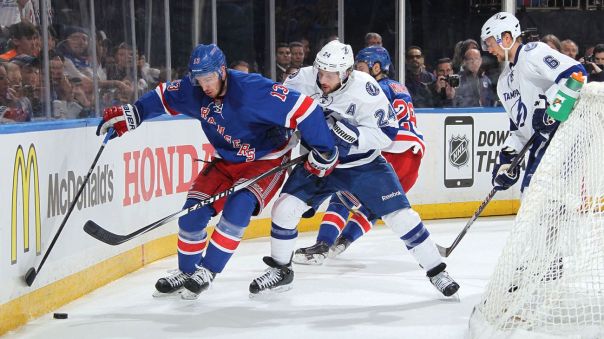 While that is certainly a lofty comparison, the initial signs of that kind of playmaking and scoring ability are there. He uses his reach to his advantage, keeping defenders off of and away from the puck and keeping the puck under the Rangers control.

“He can stickhandle inside a phone booth,” said defenseman Marc Staal. “It’s pretty impressive at this level to hand onto the puck and control it the way he does.”

Those skills became evident when Kevin Hayes continued to score spectacular goals night after night, like backhanding a puck out of midair against the Capitals in the last game of the season, weaving through defenders to score a coast to coast goal against the Avalanche, or totally fooling Islanders an Islanders defender before sliding the puck past Jaroslav Halak.

Hayes’ 45 points were the fifth most amongst NHL Rookies, behind only Johnny Gaudreau, Mark Stone, Filip Forsberg and Mike Hoffman.

Watching him play each and every night was a joy, as you could tell that he really made life difficult for anybody standing in his way. He outmuscled and outsmarted his opponents, and passed the puck around them with ease. That’s evident from his primary assists throughout the season. The league leaders in primary assists last year were Joe Thornton, Tyler Sequin, and Kevin Hayes with 21. He’s so good that he set up Tanner Glass for his only goal!

But Hayes is smart all over the ice, not just on offense. He uses his reach on defense well, deflecting passes and shots while collecting some takeaways every now and then. Vigneault also began to use him on the penalty kill, with the rookie forward finishing with 35:20 minutes of shorthanded ice time.

He’s also got a tremendous work ethic and a willingness to learn, working with assistant coach Scott Arniel and watching game film, while always accepting advice and criticism.

“Kevin takes criticism well when it’s there,” said the captain Ryan McDonagh. “He takes advice when from guys when he needs it. He tries to use it all and analyze it to improve his game.

With Martin St. Louis now retired, Kevin Hayes has a really good shot at cracking a top six role and potentially playing with Derek Stepan and his former Boston College teammate Chris Kreider. If that winds up being the case, then you can certainly expect him to maintain or surpass the level of success that he had this season.

Hayes was very consistent throughout the season. While most rookies were slowing down in the latter half of the year, Hayes was playing even better, constantly elevating his game. He plays with a poise and hockey IQ that most players his age do not possess, which makes him more of a candidate for a sophomore surge instead of a sophomore slump.

Special thanks to Sean Hartnett from CBS Sports for the quotes from the Rangers players. He’s an excellent writer and a really nice guy, so check out his Twitter @HartnettHockey.