← Rangers continue with fourth round of cuts, Raanta designated as backup
NHL Division Preview: The Metropolitan → 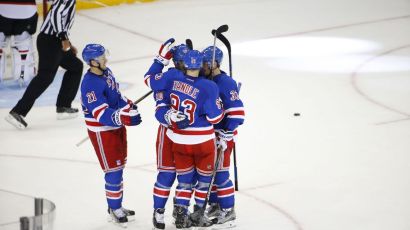 The Rangers have announced the starting lineup for tonight’s game at Madison Square Garden after making some significant roster cuts, leaving the team with just 15 forwards and eight defensemen.

Here were the lines from the morning skate, and the expected lineup for tonight.

After winning the backup role over Magnus Hellberg, not surprisingly, Raanta is expected to play the entire game tonight to get some reps in before the season starts. I’ll be looking for him to control his rebounds better, and see how he protects the top half of the net.

The scratches for tonight are pretty interesting. First is Oscar Lindberg, who at this point, should be fully expected to make the team. He’s played every preseason game so far, so he’s likely just getting the night off while Vigneault gets a look at other players. 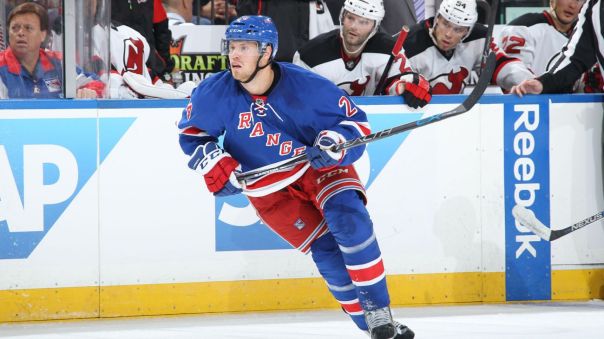 Jayson Megna is also a scratch, which was somewhat surprising. Some people thought he was fighting for a fourth line or spare forward role, so it seems odd that he’s a scratch at this stage.

And lastly is Tanner Glass, the most surprising scratch of them all. Vigneault likes Glass, knows him well, and used him A LOT last season, even when he wasn’t performing all that well. Normally, you’d expect Glass in as he tries to fight to retain his fourth line spot. But instead, he’s on the bench. Does this indicate that he’s falling out of favor with Vigneault? Or perhaps Gorton is trying to push him out as he looks to build the team in his image.

On defense, Vigneault is taking another look at McIlrath, who has really opened eyes this camp with his improved skating, reliability defensively, and improved decision making while still retaining his physicality. Raphael Diaz scored two power play goals against the Devils, but he’s been marred by defensive lapses and poor penalties.

The seventh defenseman spot isn’t a guarantee anymore. Diaz is clearly the superior offensive talent, but does Vigneault want to keep a spare defenseman that can move the puck, or one that will be a stay-at-home, reliable defensive defenseman. That seems to be McIlrath. He has a good chance at winning the job, and his one-way contract plays a big role in that as well.

McIlrath’s age (23) and salary ($600,000 NHL, $90,000 AHL) almost guarantees that he wouldn’t clear waivers. Some team would certainly snatch him off waivers. If Jeff Beukeboom is right in saying that he’s capable of being an NHL player, Vigneault way want to keep him on the roster as a spare defenseman.

The Rangers will take on the Flyers at Madison Square Garden at 7 PM, and the game will be broadcasted on MSG Network.

← Rangers continue with fourth round of cuts, Raanta designated as backup
NHL Division Preview: The Metropolitan →