Alain Vigneault has shown an unwarranted allegiance to Tanner Glass since the enforcer was signed to a three year deal prior to the beginning last season. He’s scratched better players in favor of Glass and seems to refuse to acknowledge the fact that he’s a detriment to the lineup.

Glass played all 19 playoff games last season, playing over others who would have had more of an impact, like James Sheppard. He dressed in 66 regular season games, more than Jesper Fast and Lee Stempniak.

Vigneault decided to play Glass the last two games, scratching Jesper Fast in order to make room for him. While he was surprisingly solid against Columbus, recording seven hits and two shots on goal, last night’s game against Winnipeg was a more telling example of his typical performance.

Glass played on the fourth line with Dominic Moore and Jarret Stoll, and they were practically invisible throughout the night. When Glass was on the ice, the Rangers had a single shot attempt. One. That’s it. The Jets had 14 shots on goal when he was on the ice.

One solid performance isn’t enough to counteract a bunch of subpar games dating back to last year. For the most part, Glass’ inability to produce offensively and his status as a possession black hole is too big of an issue to have him as an everyday player. The negatives greatly outweigh the positives.

Also, think about this. Glass was put into the lineup the past two days in favor of Jesper Fast and Emerson Etem. Fast effectively filled in as a top six forward during the playoffs last year, manhandling the Capitals alongside Derek Stepan and Chris Kreider. Emerson Etem has over half of the points Tanner Glass has tallied in his career despite playing in 333 fewer NHL games. And he’s also had a 61 goal, 107 point season in junior hockey.

How on earth does playing Glass over those two make sense?

I understand that AV views Glass as reliable, and I know he brings an element of physicality that Vigneault sees as important. But the reality is that there are much better options available. There’s been research done that indicates that enforcers don’t prevent injuries or dirty play (LINK and LINK), so there’s really no need for a dedicated tough guy.

There are also players on the team already that can do everything Glass does, but better. Chris Kreider is just as physical, Dylan McIlrath is bigger, and Viktor Stalberg draws penalties while also finishing his checks. On top of that, Kreider and Stalberg also produce points, which Glass doesn’t do well.

Jesper Fast and Emerson Etem are both better options on the fourth line as well. Fast is a better defensive player, he’s a good penalty killer, and he’s shown that he has offensive talent.

The only difference between Etem and Glass when it comes to size is one pound, so stick Etem on the ice and you don’t lose any size. But you do gain speed, offensive ability and someone that can score when Jarret Stoll and Dominic Moore get the puck out of the offensive zone. 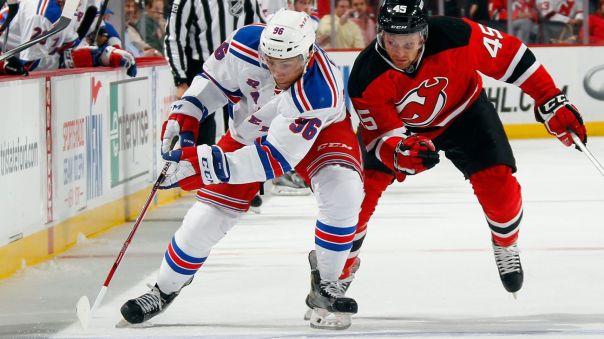 Emerson Etem is yet to play a game with the Rangers during the regular season. Photo courtesy of Getty Images.

More importantly, Fast and Etem aren’t going to develop in the press box. They need to play, and Vigneault needs to stop inserting Glass into the lineup every chance he gets. Fast and Etem are both better players than Glass, and their development shouldn’t come at the expense of playing time for Tanner Glass.

There are still teams that value what Tanner Glass brings to the table, and the Rangers could likely find a trade partner. Or, they could bury him in the AHL and save some money against the cap.

This isn’t a personal attack against Glass. He’s a great teammate that all of the Rangers like and he’s someone that would always stand up for his teammates. But in the end, what matters is the production and type of hockey that he plays. Unfortunately, it just doesn’t fit in this Rangers team.

Get Fast and Etem into the lineup, and make the Rangers a four line team again.