← Rangers head to Philly to re-ignite rivalry with Flyers; AV calls out Dan Girardi
Emerson Etem gets second chance as Rangers take on Flames at MSG →

No goal decision huge as Rangers fall to Flyers in shootout: Stalberg OUT

Was that exciting or what?

The Rangers (5-2-2) fell in the shootout to the Philadelphia Flyers (4-2-1), despite seemingly winning the game earlier in the second period. This matchup was full of scoring chances, spectacular saves and an incredible overtime period.

The Rangers saw their first goal challenge in team history, and it didn’t go their way, winding up as a massive turning point in the game. Jarret Stoll had his goal called off, one that would have given the Rangers a 3-2 lead that would have likely held with the way Lundqvist was playing.

The Flyers have won six of the last eight contests in Philadelphia against the Rangers, despite the overall success of the Rangers in the season series.

Viktor Stalberg was injured in the second period after a hit to the head from Radko Gudas. He has been ruled out for tomorrow night’s contest against the Flames.

There was a lot of pace and good flow to the first period, with very minimal stoppages throughout the 20 minutes. It was a well-played period from both the Rangers and Flyers, with finesse, execution and physicality.

The Rangers seemed to have the better start to the period, creating a few good chances and getting the puck deep in the Flyers zone. The Blueshirts got the puck on net a few times, but they couldn’t get the stick on those second chance opportunities and rebounds. The top line, specifically Nash and Zuccarello, were effective. 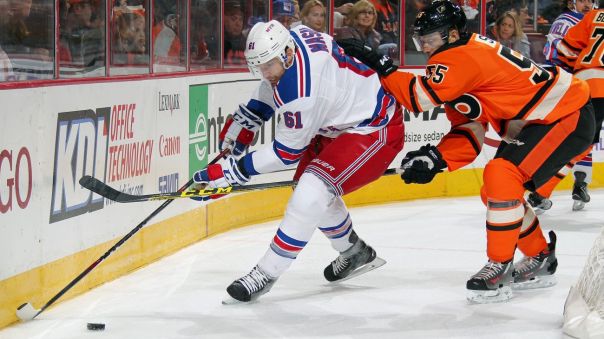 However, the Flyers got on the board first thanks to Mark Streit, his second goal of the year. Streit blasted a shot from the point that deflected off of Viktor Stalberg’s hand and past Lundqvist. Henrik was visibly frustrated, and the Flyers took the early lead.

AV’s squad weathered the storm, absorbing whatever the Flyers threw at them for a few minutes. When the Flyers had their momentum, and looked very dangerous, that’s when the Rangers struck.

After a nice defensive play, Kevin Hayes took the loose puck up the ice and flung a bad angle shot on net. Keith Yandle, the trailer, followed up the shot and backhanded it to the middle of the ice. Oscar Lindberg deflected it and it hit off of JT Miller’s midsection. Miller batted it out of midair and into the back of the net for his first goal of the season.

The Rangers had the momentum following that goal, and started to execute their plays better. The fourth line was playing very well, with Stoll and Moore getting some good chances, as well as the third line. Keith Yandle was also strong, continuing to create pressure while joining the rush.

Out of the Rangers 13 second period shots, seven game from the third line, with four of the shots on goal coming via Oscar Lindberg.

It wouldn’t be a Rangers game without a sensational Henrik Lundqvist save. Just look at this incredible right pad save he made on Wayne Simmonds.

Great pad stop by Hank on the 2-on-1 #NYR pic.twitter.com/m4P79ZStdX

The Flyers opened the second period with a very early goal, scoring just over two minutes in. Marc Staal committed an egregious turnover against the boards, handing the puck off to Scott Laughton. Dan Boyle half-heartedly tried to defend the shot and the forwards were nowhere to be found. Laughton’s wrist shot beat Lundqvist, and the Flyers retook their lead. It was his first goal in 22 regular season games.

But just like the first period, the Rangers did a great job of responding quickly, as they would go on to tie the game just 2:41 later. After Jakub Voracek took a holding penalty, New York went on the power play.

There was a scary moment as Philadelphia’s Michael Raffl appeared to collapse on the bench and head to the locker room. Earlier he inadvertently collided with a Rangers elbow and was hit in the head. He has a history with concussions, and he did not return.

After some good cycling and chances, Derick Brassard’s shot deflected off of a Flyers defenseman and past Mason. It was his second goal of the year and the third straight game with a Rangers power play goal. Kevin Hayes and Chris Kreider picked up the assists.

The third and fourth line continued to dominate possession and chances, with Viktor Stalberg backhanding a shot on goal that set up an extended shift in the Flyers zone for the top two lines. Yandle, Miller and Lindberg combined on a pretty passing play that nearly resulted in Lindberg’s fifth goal of the season.

It appeared as if the Rangers took the lead after Jarret Stoll deflected the puck into the back of the net. He tipped the puck out of midair and off Mason, but the puck caromed off his shin and into the net. The referees called it off due to “goaltender interference,” but Alain Vigneault challenged. 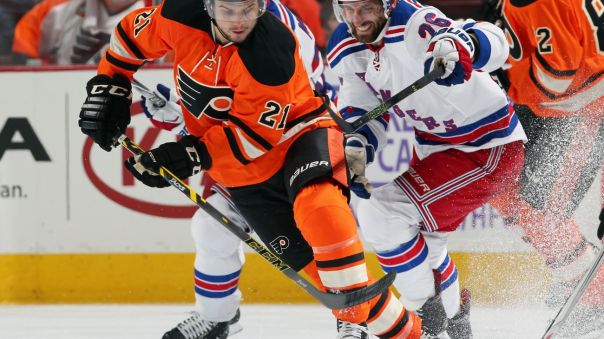 Jarret Stoll had his first goal of the season waived off due to goalie interference, a bad call that stood after a review. Photo courtesy of MSG Photos.

The review appeared to show minimal contact with Mason, and it really didn’t affect the play at all. However, the referees said his stick interfered with Mason’s glove, and it remained no goal.

Later in the period, Radko Gudas went after Viktor Stalberg, hitting him up high with the shoulder and shaking him up. Stalberg was slow to return to the bench, and immediately left the ice. He did not return.

After the end of the period, Vigneault was seen furiously screaming at the officials for two calls; the terrible no goal on Jarret Stoll, and the no call on the Stalberg hit. He had a reason to be angry about both.

The third period was probably tilted more in the Flyers favor, but there really weren’t many memorable chances for a while. The Rangers weren’t particularly effective, mustering just nine third period shots on goal while the Flyers had 18.

The key moment in this period came at the end, as the Rangers and Lundqvist had to fend off a ton of chances from the Flyers, including a big penalty kill late in the game. Henrik made some excellent stops, and Dan Girardi made the defining play, poking the puck out of the zone. Hank made one more save, getting a piece of a long shot and deflecting it just wide to deflect off the post.

Hank just gets a piece and deflects the puck off the post #NYR pic.twitter.com/27GQOIXefG

Three on three overtime was absolutely insane. There were chances galore, odd man rushes both ways and some remarkable saves on both sides. Henrik Lundqvist had two great saves, making a right pad save on Matt Read, immediately following that up with a left pad save on Simmonds. He and Zuccarello combined to keep the puck out of the net on another chance too.

In the shootout, the Flyers opened up with two straight conversions, with Sam Gagne and Claude Giroux absolutely undress. Zuccarello was stopped first, but Stepan kept the Rangers alive. After a save by Henrik Lundqvist, Dominic Moore had a chance to tie the shootout, but Mason made the stop and the Flyers skated away with a win.

Honestly, the shootout was the most anti-climactic, disappointing way for that game to end. I’m not saying this because the Rangers lost, but it’s just a terrible way to end a game. Why not have it like baseball, just play three-on-three until a goal. It probably wouldn’t take that long with all of the odd man rushes, and it’s so exciting.

Another problem was the officiating in the second period. No matter how you look at it, analyze it or break it up, that’s a goal. Stoll made next to no contact with Mason, and surely didn’t impede on his ability to make a play. Terrible call.

Also, why does the on ice official get to decide on whether or not to overrule the goal? That shouldn’t be in the power of him, it should be someone with no vested interest in the game making the call. The ref who messed up may not want to swallow his pride. I’ll elaborate on this in another piece.

Call on the ice is upheld: no goal #NYR pic.twitter.com/wZVuVCkBuc

And then, they followed that up by not calling anything on Gudas’ hit on Stalberg. It was on a defenseless player, the head was targeted, and he somewhat leapt to hit him. Gudas should have been penalized. I hope the department of player safety takes a look at it.

The third line was stupendous. Easily the best for the Rangers tonight. Kevin Hayes looks a lot more comfortable at center, where he has more touches and more control over the play. JT Miller broke through with his first of the season, and contributes a lot to the offense. And Oscar Lindberg has the poise of a 10 year veteran, always in the right place and never making a mistake. This was their breakout game as a line.

Keith Yandle has been the best and most consistent defenseman this season. He picked up another assist, giving him three points (1-2-3) in his last three games, and six points (1-5-6) through the first nine. He’s been a huge part of the offense, gets better with passing game, and needs to be out on the ice more often.

Henrik Lundqvist. At this point, what is there left to say. He has been absolutely incredible, stealing a point for the Rangers in certain games, and winning them others. He made 46 saves tonight, including a few more highlight reel saves. Lundqvist will challenge for the Vezina this year. Mark my words.

The Rangers will look to bounce back against the Calgary Flames tomorrow night at Madison Square Garden.

← Rangers head to Philly to re-ignite rivalry with Flyers; AV calls out Dan Girardi
Emerson Etem gets second chance as Rangers take on Flames at MSG →