← Rangers look for a more complete effort in Colorado; Top line of utmost importance
Why the Rangers need to sign Zuccarello ASAP →

Rangers hold on in wild win over the Avalanche; Kevin Hayes with a big night

The Rangers found themselves finding a way to answer back the the Avalanche’s surge and earn their second straight victory on the road trip. Photo courtesy of Getty Images.

Despite surrendering another two goal lead, the Rangers (32-16-5) responded quickly, holding on for a 6-3 victory over the Colorado Avalanche (22-22-11) on the road, their second consecutive win of the road trip.

The Rangers largely dominated the first period and half of the second, but Colorado came back, eventually tying the game in the third while controlling play in the process. But the Rangers answered quickly, and held on for their 32nd victory of the season.

It was the Rangers eighth road win in their last 11 games (8-3-0), and the first time that the Rangers have won at least eight road games against Western Conference teams since the 1991-92 season, when they won 10. Also, the Rangers continue to remain arguably the hottest team in hockey, going 25-9-1 in their last 35 games.

Six different Rangers had goals, and three had multipoint games, including Kevin Hayes, who scored a goal and two assists for his first career three-point game.

Cam Talbot was back in net for the Rangers, and played much better than he did on Tuesday against Toronto, making his best start since Lundqvist has been injured. Talbot made 26 saves on 29 shots, with all of the goals coming on second chances or good bounces. Talbot made some fantastic saves to keep the Rangers ahead and stopping the Avalanche’s surge, earning his seventh win of the season.

The Rangers congratulate Cam Talbot on a strong game following the 6-3 win in Denver. Photo courtesy of Getty Images.

It was a pretty good road win, with the Rangers still needing to clear some things up before their next game. In the third period, the Rangers did not get a shot on goal for the first 12 minutes of the game, which wound up being a goal. But after dominating most of the first two periods, the Rangers came out with very little energy in the third, a bit concerning with what had happened two nights earlier.

Vigneault benched some players late, including Tanner Glass and Derek Stepan, who did not have a very strong game. Martin St. Louis also didn’t play often in the third as he continues to struggle. Nonetheless, the quick response to the two goals was nice to see, but New York needs to be more careful when they’re ahead

For the second straight game, the Rangers got off to another hot start, looking like the team that needed to play with desperation, and completely shutting down Colorado. The Blueshirts outshot the Avalanche 13-5, with all of the Av’s shots coming from far out.

Dan Boyle broke through with the first goal of the game, continuing his very strong play lately. The Avalanche went for a line change at a bad time, and Kevin Hayes carried the puck into the zone, finding Boyle heading to the net. Hayes made a nice little pass, and Boyle finished it off with a great deke past Varlamov, scoring his eighth goal of the season, and his fourth goal in the last seven games. Ryan McDonagh picked up the other assist.

Dan Boyle scored a beautiful goal, faking out Varlamov for his eighth of the season. Photo courtesy of Getty Images.

Kevin Hayes started with the puck in his own zone, blasting through the neutral zone. He beat his defender, using his size and long reach to protect the puck, and bringing it back to his forehand in one swift move to beat Varlamov and give the Rangers a two goal lead on his ninth of the season. 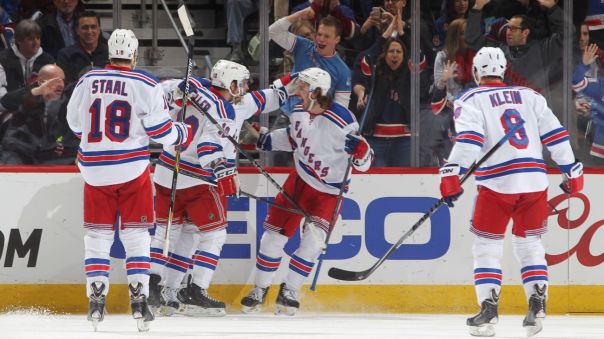 Kevin Hayes celebrates with teammates after scoring an unassisted, coast-to-coast goal in the early stages of the second period. Photo courtesy of Getty Images.

Following the goal, Cam Talbot made one of his biggest saves of the night, stopping Jarome Iginla on a breakaway chance to keep Colorado off of the board.

However, in their first sustained shift of the game, Colorado was able to get on the board, and it was the Captain Gabriel Landeskog scoring his 11th goal of the season. It was a two consecutive sustained shifts of over two minutes, pinning the Rangers in their own zone and exhausting them. A shot from Nathan McKinnon hit John Mitchell, and was stopped by Talbot. But the puck bounced up and off of Landeskog’s chest, cutting New York’s lead to one.

Following the goal, JT Miller took a holding penalty, followed by a Dan Girardi tripping penalty, giving the Avalanche a 1:53 second 5-on-3 power play. This happened to be the turning point of the game, with the Rangers doing a great job of killing it off, swinging momentum back in their favor.

Shortly after the kill, the Rangers recaptured their two goal lead, and it was Mats Zuccarello scoring again to extend his point streak to a career high seven games. It all started with Zuccarello making a good play in the defensive zone, and joining the rush as the trailer. Rick Nash connected with “Zukes” on a great pass, and his 11th goal of the season put the Rangers up 3-1. 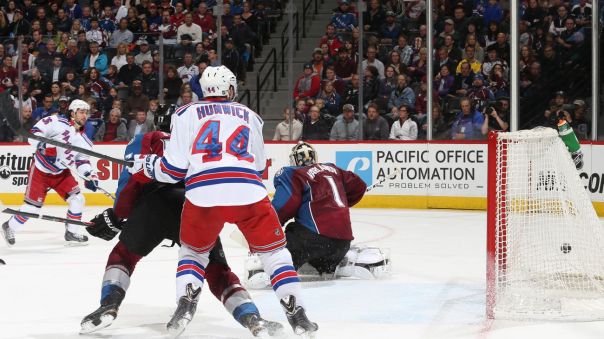 New York began the third period relatively comfortable, up in shots and goals and coming off of a good period. However, the Avalanche pressured early, controlling most of the first half of the period.

The ageless wonder Jarome Iginla cut the Rangers lead to two, as the 19 year NHL Veteran scored his team-leading 17th goal of the season. Martin St. Louis gave the puck up to Iginla, who started the play. Maxime Talbot’s shot was stopped, but Iginla cashed in on the rebound, cutting the Rangers lead to one yet again.

The Avalanche weren’t done there, Minutes later, Jan Hejda scored his first goal of the season, finding the back of the net after his first shot was blocked by Dan Girardi. It was his first goal in 88 games, and the Rangers had surrendered a two goal lead again. At 10:44 of the final period, the Rangers were yet to get a shot on goal.

However, New York didn’t take long to respond, with the third line coming through again. Kevin Hayes made a great pass to Hagelin, who tried to deflect it in. it was stopped by Varlamov, but Hagelin put in his own rebound, giving the Rangers the lead 1:18 after the equalizer. 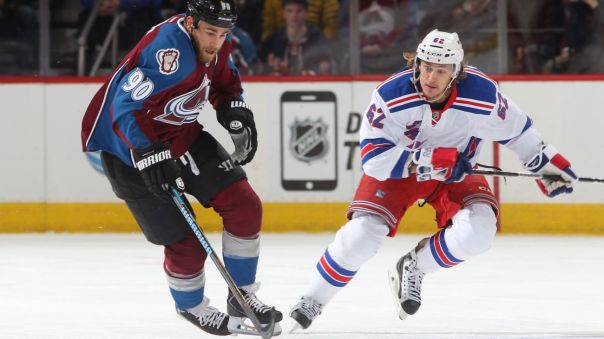 Carl Hagelin’s 12th goal of the season proved to be the game winner, answering back with a goal just 1:18 after Colorado had scored the equalizer. Photo courtesy of Getty Images.

Kevin Klein had an assist on the goal, giving him a total of 21 points this season. That ties a career high, as Klein continues to have an outstanding season.

Rick Nash added an insurance goal, showcasing his incredible talent on his 34th goal of the season. After skating 200 feet to negate and icing, Nash stayed behind the net, getting the puck from JT Miller before using his reach to tuck the puck inside the post while falling down, yet another fantastic goal from the Rangers, and giving New York a 5-3 lead.

Ryan McDonagh finished off the Avalanche, scoring an empty-netter power play goal after making a nice read of the play to intercept the puck, capping off the Rangers 6-3 win in Colorado.

Mats Zuccarello’s goal came at a huge point in the game, after the rangers had just killed off a penalty, and swung momentum back in the Rangers favor. His goal extended his point streak to a career high seven games, where he has nine points (4-5-9) in that span. He also has tallied 18 points in his last 28 games, and seems to be getting back into last season’s form. Zuccarello is fifth on the team in scoring with 32 points (11-21-32). While Martin St. Louis continues to go through a slump, it is nice to see “Zukes” stepping up and taking the role of a scoring top six forward. 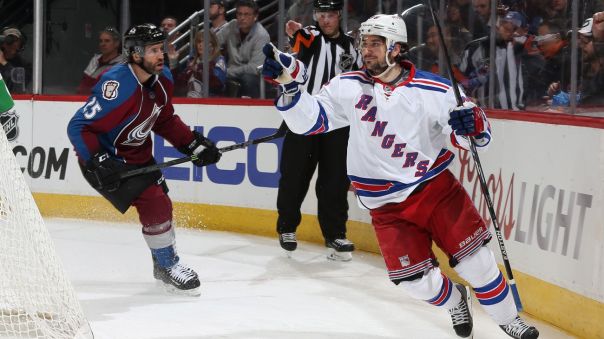 Everyone’s favorite Norwegian continued his hot streak, scoring his third goal in the past two games and extending his point streak to 7 games. Photo courtesy of Getty Images.

Rick Nash’s goal was tremendous, and his performance tonight is further proof why he deserves the MVP Award. Nash’s goal gives him a league leading 34 goals, and he also has 20 assists for a grand total of 54 points in 53 games. Nash also leads the league in goals per game (0.64), games with a goal (27), and even strength goals (25). His consistency has been scary good, and Nash continues to play extremely well.

I also thought the third line has played extremely well yet again, scoring two of the Rangers six goals. Carl Hagelin continues to stay hot, scoring the game winner, his 12th of the season, and has eight points (4-4-8) in his last 10 games. Alongside Kevin Hayes and JT Miller, Alain Vigneault may have found the third line that he has been searching for.

Since early November, I have been marveling about the play and development of Kevin Hayes, who continues to blow me away on a nightly basis with his decision making, newfound defensive ability, and his skill set. Hayes recorded his first career multi-point game, with a goal and an two assists against the Avalanche. Hayes is also the first Rangers with a plus-four rating in a game since Carl Hagelin did it on March 13th, 2012. Hayes now also has a four game point streak, with six points (2-4-6) in that span. Extend that to seven games, and Hayes has eight points (3-5-8) in those games. His successful rookie campaign continues, now sitting at 24 points (9-15-24) this season.

Kevin Hayes had the best game of his young career, tallying three points and showing why he may have been the Rangers best offseason acquisition. Photo courtesy of Getty Images.

Some credit needs to be given to the Rangers third defensive pairing of Dan Boyle and Matt Hunwick, who both played fantastically in limited ice time. Boyle finished the night with a goal and a plus-four, and Hunwick finished with a plus-three rating and two shots on goal. They both played really well and will likely be in the lineup for the next game.

The Rangers will spend Valentine’s Day down in Arizona, where they will take on the Coyotes in the third game of their road trip.

← Rangers look for a more complete effort in Colorado; Top line of utmost importance
Why the Rangers need to sign Zuccarello ASAP →