← Rangers hold on in wild win over the Avalanche; Kevin Hayes with a big night
Rangers head to the desert to take on Coyotes; Hayes and Hagelin developing chemistry →

Mats Zuccarello is in the midst of a career high point streak, and continues to show why the Rangers need to resign him as soon as they can. Photo courtesy of MSG Photos.

Every year around the trade deadline, rumors begin flying around every team, and big trades can happen in the blink of an eye. Evander Kane and Zach Bogosian were traded to the Buffalo Sabres in the first blockbuster trade of the year, and now Phil Kessel’s name is being tossed around in trade rumors.

With Glen Sather as general manager, trades are always a possibility. Last season he made headlines by sending then-captain Ryan Callahan to the Tampa Bay Lightning for their captain at the time, Martin St. Louis.

Yet again, there is another player from the Rangers whose name has been rumored in many different trades for a few months, fan-favorite Mats Zuccarello. Zuccarello was slumping earlier in the year, struggling to find the back of the net, had many people speculating that he would be traded before season’s end.

But even when Zuccarello wasn’t scoring, he was still picking up assists and finding ways to help the team win games. Every night, Zuccarello brings an element of offense, energy, and physicality despite his 5-foot-6 frame.

And now, the goals are starting to come for Zuccarello, finding the back of the net four times in his career high seven game point streak, with three of them coming in the past two games.

Zuccarello had been hesitant to shoot during his goal drought, but has increased his volume of shots lately, with eight shots in the past two games combined. Head coach Alain Vigneault had said that he would like to see him shoot more, and Zuccarello himself said that he was trying to, but found it hard to do so with Rick Nash on the line. But he has found a way to do exactly that, and has been reaping the rewards during the point streak. 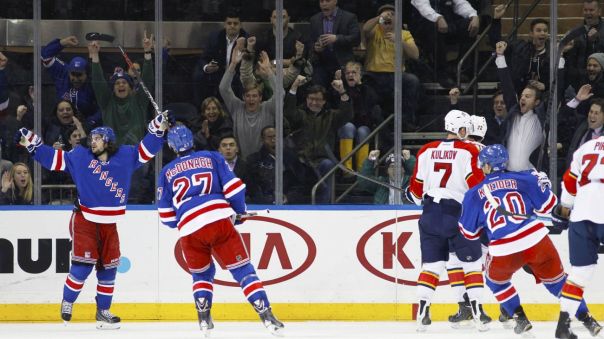 The goals are coming for Zuccarello, who has found the back of the net four times during his career high seven game point streak. Photo courtesy of Getty Images.

With a goal against the Avalanche, Zukes now has 11 goals and 32 points, not quite on pace for reaching last year’s 59 point (19-40-59) mark. But if he keeps playing at this level, he could finish the season with a solid stat line.

His teammates and Vigneault have both said that they would like to keep Zuccarello on the team, understanding his role with the Rangers.

“I don’t make those decisions and I’ve got a pretty good relationship with (Zuccarello), so read between the lines: You know I want him to be back,” said linemate Derick Brassard following the win over the Maple Leafs. “But for me, it’s not the points, it’s not the goals, it’s the way he plays away from the puck. It’s the way he works.”

Mats Zuccarello and Derick Brassard have build up a great relationship and a tremendous amount of chemistry over the past two years, and locking up the second piece of the Rangers dynamic duo would be great for the future. Photo courtesy of MSG Photos.

Brassard also went on applauding Zuccarello for his passion during practice and games, saying that it’s important to have guys like that around.

Vigneault also reiterated the same feeling about the Norwegian winger, with high praise for Zuccarello following a practice.

“I would prefer he stayed a New York Ranger,” said Vigneault. “I made that very clear to management. This young man has a lot of upside. I do believe that he can play better than he has this year. I do see him as a part of our future. But at the end of the day, this is a business, and if he wants to stay, and we want him, there’s got to be common ground.”

That common ground statement Vigneault discussed is what is most important. The Rangers have a lot of players that need to be resigned or extended, and they don’t have a ton of free cap space to do so.

Veteran winger and future Hall of Famer Martin St. Louis is making $5.625 million this season, but is doing very little to justify that salary, having been held without a goal in the last 14 games. However he has said that he is willing to work with the Rangers and take one year deals to work with the cap. What happens with him could have a big impact on Zuccarello’s future.

Martin St. Louis is having a pretty down year by his standards, and is making a lot of money. What Glen Sather decides to do with the future Hall of Famer could have a huge impact on Zuccarello’s future. Photo courtesy of MSG Photos.

There is also money owed to several restricted free agents, with those players being Derek Stepan, Carl Hagelin, Jesper Fast, and JT Miller.

One of the Rangers most dominant lines last season was their third line, consisting of Benoit Pouliot, Derick Brassard, and Mats Zuccarello, a line that was consistent throughout the season and very important in the playoffs.

Pouliot was offered a big contract in the offseason, signing a 5 year, $20 million deal with the Edmonton Oilers. Sather was able to lock up Derick Brassard, signing him to a 5 year, $25 million extension, a signing that has worked out extremely well this season. Brassard and Zuccarello continue to play extremely well together this season, and locking up that dynamic duo would be very nice for the Rangers future.

Zuccarello is an extremely crafty player with a great ability to carry the puck and set up his teammates. And as we have seen recently, he can do damage whenever he decides to shoot the puck. A player with his skill set does not come around often, and letting him walk would be foolish, especially considering how he has had just one full NHL season under his belt. He has flourished under Vigneault, knows the system very well, brings a ton of energy each night, and has room to develop.

With that in mind, the Rangers should start working on an extension with Zuccarello now, before the trade deadline and before the season ends. Zuccarello signed a one year, $3.5 million deal in the offseason, a big bump in pay from his $1.15 million he made last season. But I think what is really more important to Zukes is the length, as he probably is looking for some security in his deals. 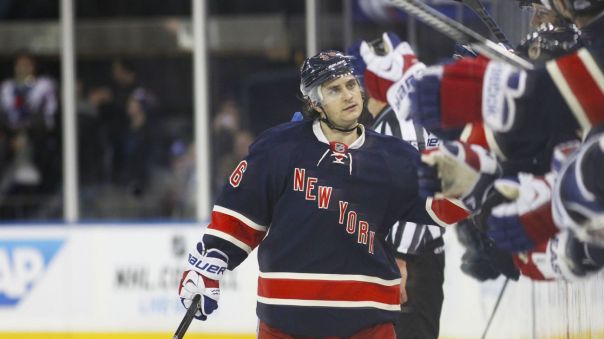 Mats Zuccarello is a unique player with a great skill set and room to develop. Letting him go would be a foolish move on the Rangers part. Photo courtesy of MSG Photos.

The Rangers should extend Zuccarello now because you don’t want another team to come in and offer him a Benoit Pouliot type of deal, the Rangers would not be able to match that, and it would be hard for anyone to leave a large sum of money on the table. However, if the money is close, I think he would stay.

Give Zuccarello what he wants; a longer deal at around the same money; three years at $3.75 million or four years at $3.25 million.

← Rangers hold on in wild win over the Avalanche; Kevin Hayes with a big night
Rangers head to the desert to take on Coyotes; Hayes and Hagelin developing chemistry →