Sam Rosen said it best- “The Rangers just don’t like to lose.” After an emotionally exhausting night, losing to Tampa Bay 2-1, the Blueshirts got right back on track, defeating the Florida Panthers 5-4 in overtime to finish the brief two-game road trip.

The line of Stalberg-Hayes-Lindberg received some constructive criticism from Alain Vigneault, and they looked much better once AV put Miller on that line in place of Hayes. The line recorded one goal- Stalberg’s second of the season- on the night.

The Rangers received the first power play opportunity of the game, recording quite a few shots on goal, despite the slow start. McDonagh’s shot was his team’s best opportunity, but it hit Luongo in the head. He recovered fast, though, and play continued.

MacKenzie broke up a pass from a Rangers’ defenseman and wasted no time skating in on Lundqvist, but he was robbed with a brilliant save. Lundqvist put his left shoulder up in time to have the puck skid off his padding and up into the netting.

Florida had their chances on the power play, as well, including a 5 on 3 opportunity for a minute and thirteen seconds. They had five shots on goal, each better than the next. As most times, Lundqvist was the story in that one, coming up big with three amazing pad saves. He swooped over to the left twice in about fifteen seconds to keep his team’s penalty killing stellar. Currently, it stands at second in the League. They finished the night 3/5.

For the first time in an 89 year franchise history, the Rangers had back to back penalty shot opportunities- and by the same guy- Chris Kreider! He decided to go left side this time instead of right, but a stick save by Luongo denied him the goal. If he made more moves while breaking in he might have had a better chance to confuse the goaltender. He’s still in an early NHL season, and with help from coaches he is sure to improve.

11:08 into the period, it was Mats Zuccarello with the outlet pass to Captain Ryan McDonagh. McDonagh made a fast cross-ice pass to Rick Nash, who finished the job, ripping a shot from left circle to give his team the one goal advantage. Zuccarello has played excellent to say the least, and this goal gave him his tenth helper of the season.

Shortly after, the teams traded penalties, and the four on four saw some great scoring chances, but both goaltenders put on a show, shutting down every opportunity.

A keep in by Keith Yandle provided his team with a final push inside the final minute of the period, but the Rangers’ stayed up by a goal.

The Panthers received yet another power play early in the second, and the Rangers shut them down again. They blocked numerous shots and kept with their strategy of creating offense when they can instead of just dumping the puck. Whatever they’re doing, it’s definitely working.

Bjugstad put his team on the scoreboard 6:46 into the second period when the Rangers failed to get the puck out of their zone. Pirri took advantage of the play, but it was Bjugstad with the finish that beat Lundqvist on the glove side.

The Blueshirts kept up the pace, though, not seeming to accept a tie game. Nash wasn’t done just yet, but he couldn’t have done it without assistance from none other than linemate Mats Zuccarello. Zuccarello made a great defensive play at his own blue line and poked the puck out to Nash. He sped down the ice, a one-on-one play, and 13:22 into the middle period, a pretty weak shot resulted in a 2-1 lead for the Rangers.

With twenty seconds left to go in the Panthers’ fourth power play of the game, they converted on Pirri’s shot from the point. It got deflected by Jokinen’s stick, which was positioned nicely in the shooting lane. A back and forth game was tied 2-2 headed into the final period of play with the Panthers leading 28 to 22 in shots.

The third period looked much better for the Rangers. Stronger forechecking led to takeaways and more scoring chances for the Rangers’ team, and their two goals were proof of better play.

Chris Kreider had a great chance to put his team up early in the third but failed to make a clean pass to Kevin Hayes on the two on one, and the game remained tied.

Zuccarello collected three points on the night, scoring his team-leading tenth goals 10:16 into the period. A wonderful defensive play by Stepan led him to make a stretch pass to Zuccarello who made every possible move he could make on Luongo. 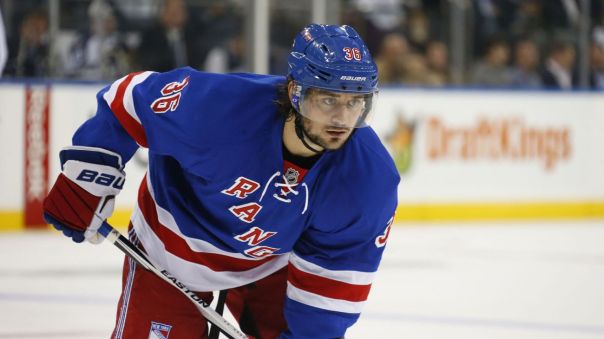 A 3-2 Rangers’ lead wasn’t enough for Viktor Stalberg, though. Just about two minutes later he took a snap shot in front of the net that put his team up by two.

The Rangers probably thought they had this game put away, but Barkov thought differently. 17:36 into the last period, Barkov helped his team go 2/5 on the power play with a shot that went past Lundqvist. With the goaltender pulled, it was actually a 6 on 4 for Florida, and they did a good job sustaining pressure in the Rangers’ zone.

At a one goal disadvantage, Jagr took a wrist shot from left circle with 1:49 left in the game, and luck had it that it hit the twine, tying a dramatic game at 4. Lundqvist had previously given up only two goals in the past ten road games. An arena packed with Ranger fans was nearly silent. But that’s hockey- a game of inches that can change in a minute.

The Panthers didn’t stop there. A hooking penalty on Dan Boyle led to a penalty shot for Riley Smith. Lundqvist came up huge for the Rangers, denying Smith the opportunity to hand the home team the win. A truly heart-racing game was headed to overtime.

Rick Nash was the hero of the night for the Rangers, recording his second career hat-trick with the team and giving them the win on a 4 on 3 power play. The Panthers’ head coach questioned the goal for being offside, but the referees agreed it was a good goal, and the Blueshirts managed to pull away with the win. 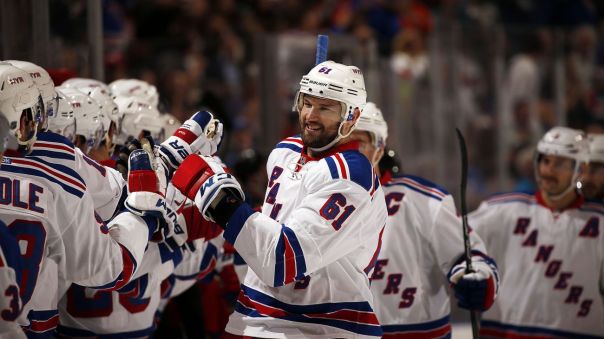 Nash should definitely take momentum heading into Monday night’s contest against the Predators at Madison Square Garden. He played a solid game and contributed on both ends of the ice. This is the Rick Nash the Rangers are used to, and hopefully they see a lot more of this in the future.

This is the Rangers’ tenth win in their last eleven games, and they are currently the hottest team in the NHL. They’ve also managed to record at least a point in fifteen of their last sixteen games. They intend to start up another winning streak. Monday night they play a good Predators’ team, so it should be an intense game to watch. Catch the action on MSG at 7:00pm.