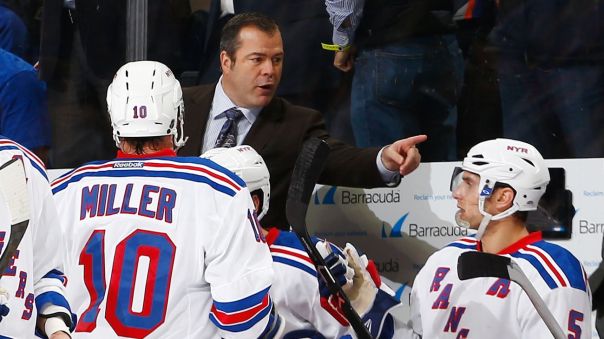 After a disappointing performance against the Avalanche, mustering just 25 shots on goal, Alain Vigneault switched up the lines to try and make a spark for a team that has won just one of their last six games.

Here were the lines from practice;

Vigneault never ceases to amaze me when coming up with new lines that show promise, and these lines are no different. I like them a lot. Let’s break them down line by line.

Oscar Lindberg has been very good and very consistent all season long, and now he gets the chance to play with two of the better forwards on the team. Rick Nash has been a bit quiet lately, but this is a 40 goal scorer and a fantastic three zone player who can score at will. Chris Kreider needed a change of lines, and putting him with Nash could help him break out. Lindberg deserved a chance to play here, and now he gets it.

Thank goodness Kevin Hayes is separated from Kreider. Kreids has been totally lost on the ice, and with the lack of a true second line right winger (before this lineup), Hayes was practically on his own. Now, he’s paired with Zuccarello and Brassard, two of the best players on the team. Hayes and Zuccs are also two of the most creative, so this could be fun to watch. Just as long as someone is willing to take the shot.

Dominic Moore gets a chance to show off his offensive skills on the third line alongside Miller and Fast. Fast is a good two way player, but he can show some great offensive talent at times. Miller has been great with Lindberg and Glass in the last two games, and this line separates Moore from Stoll, which should be really good.

The fourth line looks solid. Stoll isn’t going to give you much in the way of offense, but he’s good on faceoffs and defensivey. Stalberg is a good forechecker and scores sporadically. Glass has been great in the last two games, posting positive possession numbers in both of them.

I’d like to see Etem in there, because he’s a young, talented skill player and needs to play, and I’d probably slot him in for Stoll.

With Stepan out, this is as close to balanced as the lineup is going to get. The top two lines have a good balance of scoring in all three positions. The second line used to have the struggling Kreider and whoever was on the right wing, and nobody was scoring. Now, its Kevin Hayes and Zuccarello, which is vastly improved.

Speaking of Kreider, he needs to be better. He’s actually been a nonfactor in a lot of games. He isn’t playing very physical, he isn’t getting a lot of scoring chances, and he isn’t helping the teams. His confidence has to be at an all-time low right now. Playing with Nash and Lindberg gives him a new chance and a good opportunity to get his production going. If it doesn’t happen now, who knows when, or if it will.

The Rangers take on the Senators tomorrow at 7 PM.