After a really rough road trip, the Rangers (19-9-4) snapped their three game winless streak, ending the Oilers (14-16-2) six game win streak and heading out on their road trip following a 4-2 win.

With Dan Girardi sidelined due to a swollen knee, the Rangers needed to rely on two of their young defensive prospects, turning to Dylan McIlrath and Brady Skjei to shoulder some tough assignments and hold down the fort. They were both fantastic.

Dylan McIlrath scored his first career goal in the second period, and Brady Skjei logged 15 minutes of ice time, including over two minutes on the penalty kill. Both helped the Rangers play a much more focused, sound defensive game.

The first period was a complete 180 from the type of hockey they had been playing lately. The Oilers played last night, and this was their third game in five days, and New York pounced on the opportunity. Outside of two power play opportunities, Edmonton didn’t really pressure much.

It didn’t take long for the Rangers to get going, with leading scorer Mats Zuccarello netting his 14th goal of the season. After getting the puck from Keith Yandle, Zuccs fired a wrist shot while falling forward, beating Nilsson on the far post and putting the Rangers up 1-0.

Brady Skjei got his first taste of NHL action, and he was very good. Nothing blew you away, but he made multiple simple, yet effective moves that were really smart. He’s a good skater, and that was on display too.

Skjei nearly picked up his first point of his career, feeding Rick Nash for a breakaway that was denied by Nilsson’s left pad. He also made a defensive play along the boards and helped transition the puck to start the play that led to Zuccarello’s goal. Skjei wasn’t timid or hesitant with the puck, and even joined the attack on a few instances. Here is one of the better defensive plays that he made.

Nice defensive play by Skjei in front of the net #NYR pic.twitter.com/S0YqogjwER

Skjei logged 5:08 of ice time in the first period, including :49 on the penalty kill, recording two blocked shots. The Rangers led 1-0 after the first period and were up in shots, 9-6.

The second period was back and forth, with chances on both sides of the ice. The Oilers scored two goal, but the Rangers showed resiliency yet again, answering back quickly both times and maintaining their one goal lead

Lauri Korpikoski had a breakaway chance early in the second period, and Oscar Lindberg was called for a hooking. However, Dylan McIlrath was tripped at the blue line, starting the breakaway. No call. Lindberg barely got his stick around Korpikoski, that was called. Marc Staal was crosschecked into the net. No call. Alain Vigneault was not happy as the Oilers went on the power play.

On that mand advantage, Taylor Hall continued to give the Rangers nightmares, scoring again and tying the game at one. He was uncovered when he got the pass, and stayed very patient with the puck, waiting for Lundqvist to open up and beat the Rangers netminder through the wickets.

But the Rangers answered back quickly, and it was a big moment for Dylan McIlrath, scoring his first career NHL goal to give the Rangers their lead back.

The fourth line got the offensive zone start, and Dominic Moore won the faceoff back to Keith Yandle. Yandle held on to the puck and waited for Dylan McIlrath to wind up. His one-timer traveled faster than the speed of light, beating Nilsson and giving the Rangers their lead back. The celebration was even better, and you could really tell how happy his teammates were for him.

McIlrath became the first Rangers rookie defenseman to score a goal since Ryan McDonagh scored in the last game of the 2010-11 season.

Not much happened for the next 11 minutes or so, with neither team surrendering many shots or scoring chances. But a costly turnover at the blue line led to the second Edmonton goal of the period. Skjei fanned on a pass, and Ryan Nugent-Hopkins fed Jordan Eberle for a breakaway. He made a nifty move in front of the net and lifted it over the pad of Lundqvist.

But the Rangers answered back again after the Oilers were whistled for too many men on the ice. On the power play, Mats Zuccarello passed it to Rick Nash in front of the net. He shot the puck on net and collected his rebound, beating Nilsson with just 39 seconds remaining.

Nash gives the Rangers a 3-2 lead with this power play goal #NYR pic.twitter.com/uz6mh77RIV

It was a massive goal from Nash, one that really changed how the team could have felt heading into the locker room. The Rangers headed into the third period up 3-2 and with a 15-13 advantage in shots.

Despite being down a man for a long time, the penalty kill was superb. Skjei logged a total of 2:15 on the penalty kill, and he made a nice play tying up Jordan Eberle to prevent a shot and clearing in on one of the Oilers’ attack. McIlrath blocked a deflection from Draisaitl and cleared the puck later on.

Great play by Skjei on the penalty kill #NYR pic.twitter.com/Lch8FiEefU

Henrik Lundqvist was sharp in the third period, denying the Oilers on some of their better scoring chances in the game. With a strong defensive effort and a sharp Henrik, the Rangers were able to seal the deal with a Jesper Fast empty netter, rewarded for his excellent overall play.

The defensive effort from the Rangers was fantastic, much better than this past road trip. The team allowed just 16 scoring chances at 5v5, tied for their lowest total of the season (Oct. 18th vs NJD).

It’s no secret that Dan Girardi has a negative effect on Ryan McDonagh in all stats, whether it be in corsi, goals for and against per 60 minutes, and other areas. The pairing of McDonagh and Staal played well together, finishing with a +4 and +2 corsi for rating, with McDonagh playing over 25 minutes of ice time. That really says something.

Brady Skjei really was awesome. His skating ability was very obvious, and he was able to get out of some sticky situations with a calm demeanor and smart movements on the ice. On a few occasions he was able to catch up to guys like Jordan Eberle and Leon Draisaitl and push them off the puck. He made that one turnover that led to the goal, but bounced back nicely.

Also impressive, this was Skjei’s fourth game in five nights, and he still played that well. Quite the debut from the kid out of Minnesota.

Rounding up the defensive performances is Dylan McIlrath, logging a career high 18:38 and scoring the first goal of his NHL career. McIlrath belongs in the NHL, and he should be an everyday player. He’s become so smart on the ice, and almost never gets caught out of position or making a mistake. He’s got a rocket of a shot and showed that with the goal tonight. His story is also a feel good tale, working extremely hard to get past some serious knee injuries and earn an NHL spot. Way to go Dylan. 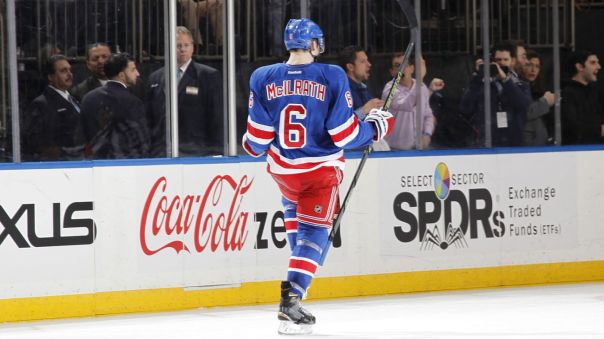 The line of Rick Nash, Derick Brassard and Mats Zuccarello should never be broken up ever again. Zuccarello and Nash each tallied a goal and an assist, and Brass picked up a helper too. Mats Zuccarello already has 27 points through 32 games this season, and his 14 goals are just five shy of his career high. Zuccarello is on past for 36 goals and 33 assists for 69 points.

Rick Nash played one of his best games of the season tonight, scoring the game winning goal and becoming the third Ranger this season to hit double digits in goals. For everyone complaining about his production, he’s already tallied 23 points (10-23-30) in 30 games. He also draws a ton of penalties, giving the Rangers a lot of opportunities to surge ahead on the power play. Nash played a really complete game tonight in all three zones.

The Rangers will head back on the road and take on the Minnesota Wild on the road this Thursday.