Rangers look to finish first half strong against Ducks: Hagelin returns to MSG

Tonight at MSG, the Rangers (19-12-4) will take on the struggling Anaheim Ducks (12-15-5) in the last game before a six day Christmas holiday break. It may look like a meaningless mid-December game, but Alain Vigneault will be looking for a way to snap his team out of their funk and try and right the ship before the break.

This is the first of two games between the Rangers and Ducks this season, and the only one at MSG. The Rangers owned the season series last year, winning both games by a combined score of 11-3, including a 7-2 win at the Garden.

Winning has not come easy for the Rangers lately. Their 7-3 loss on Sunday, surrendering six straight goals to the Washington Capitals, saw them hit a new low. In their last 14 games, they’ve won just three times, collecting a total of eight points in the standings out of a possible 28.

The Rangers have also surrendered 17 goals in the last three games and 31 in the last six. The goaltending has been lackluster and the defense nonexistent. Henrik Lundqvist had a fantastic 1.99 GAA coming into play on December 11, but he’s seen it rise to 2.43 since then.

The Anaheim Ducks are in a similar situation. Like the Rangers, the Ducks were facing lofty expectations prior to the start of the season following a game seven defeat in the Conference Finals. But they’ve struggled all season long, and sit last in the Pacific Division, behind teams like the Edmonton Oilers and the Arizona Coyotes.

Their big name players have also struggled to get going. Corey Perry had a really slow start, but he’s been better lately and leads the team with 10 goals and 20 points. Ryan Getzlaf has just a single goal in 28 games played. He scored 25 last season. Ryan Kesler only has four goals and 12 points, and only three players have more than 15 points.

Carl Hagelin was traded to the Ducks in exchange for Emerson Etem and a second round draft pick (Ryan Gropp) due to salary cap reasons. Like the rest of his team, Hags has struggled to score and have a consistent impact on the ice. He scored his third goal of the season in a 5-2 loss to the Islanders last night, giving him eight points. 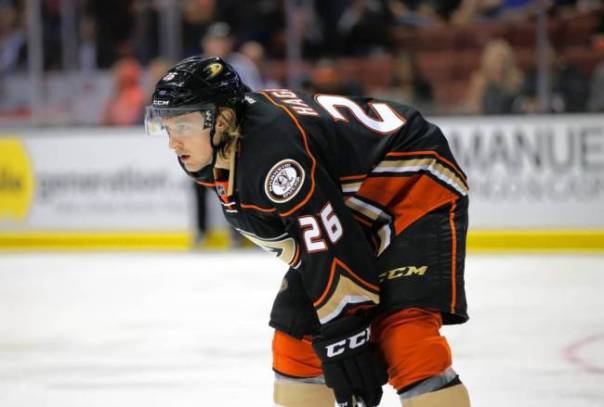 Photo courtesy of the Associated Press.

For the first time in his career, Hagelin will face a former team, going up against the organization that drafted him in 2007.

Hagelin was a hard worker and a popular player during his time in New York, so my guess is that he’ll get a warm welcome. But for the Rangers sake, let’s hope that his offensive struggles continue tonight.

Henrik Lundqvist was yanked after the second period of Sunday’s game after surrendering five goals on 24 shots. While he hasn’t been at his best, clearly, he is getting virtually no help from the players in front of him. Wide open chances, turnovers from his defenseman and lots of odd man rushes is what he has had to deal with. Lundqvist will be searching for his 16th win of the season tonight.

Dan Girardi has missed the last four games with a knee injury, and he’s not expected to return for tonight’s game. Girardi skated on his own before the morning skate, but left the ice when his teammates went on. Kevin Klein is not expected to play either, still sidelined with an oblique injury.

With those two defensemen out, Ryan McDonagh has been expected to shoulder a lot of the workload. And he hasn’t done all that well. The second year captain has struggled for most of the season, and is not playing at the same level defensively that we have come to expect from him. Along with Marc Staal, another struggling d-man, these two need to play much better.

On the other hand, Dan Boyle is heating up, scoring four goals and six points in his last seven games. Boyle has been fantastic on the power play, and he’s been on the ice for 15 of the team’s 21 power play goals. He’s done a great job with an increased workload, and AV will lean on him heavily for production again.

JT Miller is one of the few forwards that has been consistently producing and having an impact. During the 14 game skid, Miller has scored four goals and three assists. He’s bounced up and down the lineup, and will play with Kevin Hayes tonight, who is in the midst of a 14 game scoreless drought. If he can get him going, then the Rangers will be in a much better place.

Vigneault insists on using Jesper Fast in the top six, and the Swede finds himself on the top line tonight. I think Fast is an excellent and reliable defensive forward, but he isn’t a top six player. However, he needs to produce if he is going to stay up there. Fast has 11 points (5-6-11) in 33 games.

The Rangers and the Ducks will face off at Madison Square Garden at 7 PM. The game will be broadcasted on MSG Network.