← Rangers suffer late collapse in defeat to Islanders, slip to third in the Metropolitan
Rangers look for rebound game against the Flyers; Girardi expected to play → 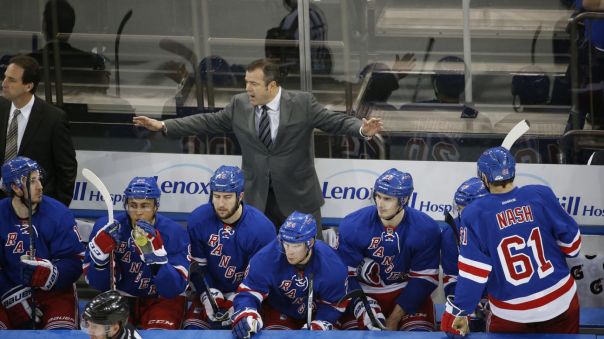 When the Ranger take on the Flyers and Capitals this weekend, they will be doing so with their mom’s by their side. Earlier in the season was the Rangers Dad’s trip, and this weekend the players get to spend time with their mothers.

The Ranger moms were at practice today, where Alain Vigneault switched up the forward lines ahead of the team’s tough weekend against the Flyers and the Capitals. Here’s what they looked like:

Nope, your eye are not playing tricks on you. The Rangers have an actual top-six again and Oscar Lindberg is finally back in the lineup.

For two games, Vigneault made the baffling decision to scratch his fourth leading goal scorer, even though he found the back of the net in the last game he played. Instead, he kept Jayson Megna as a top six forward despite him not doing much of anything in the last three games.

So finally, Lindberg gets back into the lineup, and I’m really liking the line AV has put together. Hayes could benefit from having some responsible defensive forwards on his side to take some of the pressure off of him. But both players have some speed and it could be a pretty good scoring line too. Very balanced.

Vigneault went back to the top line from two years ago, sticking Derek Stepan in between Nash and Kreider. Kreider had some good scoring chances last night and should have put away at least one of them, and his overall play has been better. Nash really needs to start doing a bit more though. He’s not having bad season by any means, but after a 42 goal season last year, 12 goals through half of the season is a bit disappointing. All three of these players have been pretty good lately, so hopefully they work well together.

I also really love the second line. For a while, JT Miller was on the top line with Brassard and Zuccarello. And that line worked so well. Miller is playing the best hockey of his career lately, playing well all over the ice, getting big minutes and creating scoring chances for himself and his teammates. He’s really becoming a solid top six player, and putting him with those two makes for a very good line.

Finally, finally, Jayson Megna is not on the second line. In the first game, he played well and scored a goal and an assist. Good for him. But it was to replace an injured Chris Kreider for a game, not on a permanent basis. He is not a top six player, and that showed these last three games. Vigneault was using him on the power play too, and it just didn’t make any sense. Hopefully Lindberg gets his spot on the man advantage.

Also, I really hope Viktor Stalberg isn’t scratched to make room for Megna on the fourth line. Stalberg has been playing very well lately, and the fourth line has been pretty effective, both defensively and creating possession. A line with Glass, Moore and Stalberg is what AV should use.

Antti Raanta hasn’t played in over a month, mainly due to his head injury, then a tight back, and the Rangers recent lack of back-to-back games. But he will get the nod on Sunday against the Capitals. Lundqvist will start tomorrow’s matinee against the Flyers.

← Rangers suffer late collapse in defeat to Islanders, slip to third in the Metropolitan
Rangers look for rebound game against the Flyers; Girardi expected to play →