← Enough with the optimism, the Rangers are not well prepared for the playoffs
Home Cooking: Rangers secure a huge two points over the Panthers at MSG → 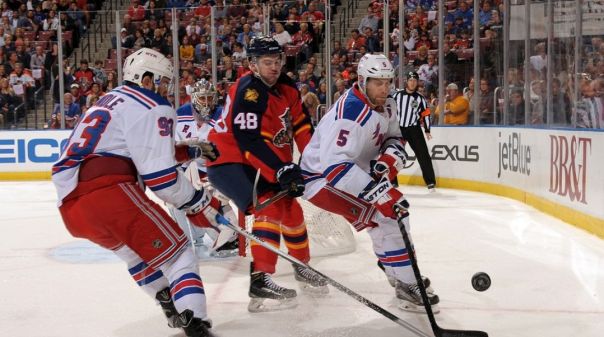 After a disappointing California road trip that exposed many of the team’s flaws, the Rangers (40-24-8) enter the home stretch with just 10 games remaining, playing three of the next four games at MSG. They start tonight against the Florida Panthers (40-23-9), who sit in first place in the Atlantic Division.

In their last game out, Henrik Lundqvist kept his team in the game for a long time despite being completely outplayed. The Sharks totaled 52 shots on goal, two times as many shots as the Rangers had, and scored four times. That put the Rangers at 3-4-2 in the last nine games.

And while the Rangers are significantly cooling down, other teams are starting to heat up. The playoff picture in the Metropolitan is very tight. The Rangers currently sit in third place, tied with the Penguins in games played, wins and points. But Pittsburgh have won six straight games and eight of the last 10. The Blueshirts are three points ahead of the Islanders for the first wild card spot, but the Isles have two games in hand. And the Red Wings trail the Rangers by five points with no games in hand for the last Wild Card spot.

If the Rangers want any chance of home ice advantage, they’ll need to play extremely well in these last 10 games. Tonight’s matchup is also very important because if the Blueshirts slip down into the first Wild Card spot, a definite possibility, they would take on the Florida Panthers in the first round.

This is the third game of the season between these two teams and the only one taking place at Madison Square Garden. The teams split the two meetings in Florida, with the Rangers skating to a crazy 5-4 overtime win on November 21 and then getting shut out 3-0 on January 2. In the first game, Rick Nash recorded a hat trick, with the third goal coming on the power play at 2:01 of the overtime period. The Rangers almost lost that game in regulation, giving up two goals to Jaromir Jagr and Aleksander Barkov less than a minute apart late in the third period. Henrik Lundqvist also had to make a huge save on a penalty shot. In January, Roberto Luongo stopped all 39 shots he faced in the shutout win.

One of the best trades this offseason was swapping Jimmy Hayes for Reilly Smith from Boston. The 24 year old winger has set a career high with 23 goals, and has 45 points so far. He’s partnered with Vincent Torcheck, also having a breakout season, and Jussi Jokinen, one of the best passers on the team with 38 assists. Smith will play the role of trigger man, so the Rangers will need to watch out for him.

Roberto Luongo should realistically be a finalist for the Vezina this season, shouldering a heavy workload and helping bring the Florida Panthers out of the depths of the Atlantic Division. Luongo is 30-18-6 with a 2.37 GAA and a .921 save percentage this season.

It’s not confirmed but Henrik Lundqvist will probably be back in net tonight against the Panthers. Lundqvist was fantastic against the Sharks, doing his best to stop an onslaught of 47 shots, turning aside 43 of them before getting a mercy pull. Unless the Rangers sharpen up defensively, it’ll be hard for Hank to keep bailing out the Rangers, as he’s already posting a .937 save percentage at even strength. Lundqvist is 31-19-6 with a .922 save percentage and a 2.42 GAA. In 32 career games against Florida, Lundqvist is 21-10-1 with a 1.91 GAA long with a .934 save percentage and five shutouts.

Eric Staal has been meshing well with his new linemates lately, partnering with Kevin Hayes and JT Miller. He has three points (1-2-3) in 10 games with the Rangers, but has been robbed of at least an assist or two recently. The Rangers will need more consistency and offensive fire power from him, especially given what they traded to acquire him.

Rick Nash is yet to score since returning to the lineup, and is sitting on 33 points (12-21-33) for the season. However, he’s had success against the Panthers recently, with five goals in the last four games against Florida, as well as 12 points (7-5-12) in the last 11 games against them. The Rangers desperately need him to start scoring heading into the playoffs.

With just Oscar Lindberg as a spare forward and Dylan McIlrath not ready to return, it’s unlikely that Vigneault could make a statement by changing the lineup. AV announced that the lineup will not change after the team’s morning skate.

The Rangers and the Panthers will faceoff at Madison Square Garden at 7 PM. The game will be broadcasted on MSG Network.

← Enough with the optimism, the Rangers are not well prepared for the playoffs
Home Cooking: Rangers secure a huge two points over the Panthers at MSG →