← Rangers preseason continues with game against the Devils; Vesey to start
Fixing the Pirri Problem; How to best use the new breakout Ranger →

Rangers Lineup for tonight’s game against the Devils 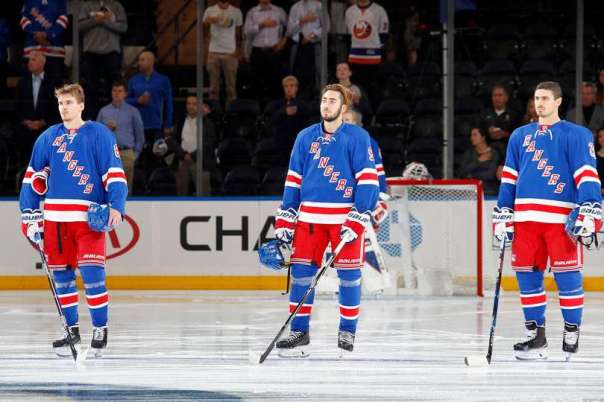 The Rangers have announced their official lineups for tonight’s preseason game against the New Jersey Devils;

Alain Vigneault is trying out a new winger on the right side of Zibanejad and Kreider. Originally I thought that Kreider would wind up playing with Derek Stepan but AV seems to really like him with Zibanejad. As he should, because those two look really good together and have already spoken a lot about how much they like playing together.

JT Miller could wind up being a really nice fit there following his breakout 22 goal, 43 point season. He has just as much upside as Chris Kreider, so throwing them on the same line with an extremely talented Zibanejad at center could be fantastic.

Jimmy Vesey gets another game after and okay first performance. He tapered off a bit halfway through last game so he’ll be looking to have a consistently good performance tonight and make his presence felt offensively.

The third line in this game is important because that could very well wind up being the fourth line we see to start the season, especially with Oscar Lindberg and Josh Jooris sidelined for now. Nathan Gerbe is a solid all-around fourth liner while Michael Grabner and Jesper Fast add some speed and scoring on the wings. On top of that, all three of them are excellent defensively and on the penalty kill, which means that Vigneault might actually have a functional fourth line again.

Brady Skjei will pair with Adam Clendening, who is fighting for a starting spot after a great game against the Islanders. This could be the third pairing for the Rangers if AV decides to stick with McDonagh-Girardi and Staal-Klein to start the year. So definitely keep an eye out for how these two perform together.

Buchnevich and Pirri get a night off but Jensen and LaPierre will suit up for the third straight game.

The game will begin tonight at 7 p.m. and you can watch it on MSG Network.

← Rangers preseason continues with game against the Devils; Vesey to start
Fixing the Pirri Problem; How to best use the new breakout Ranger →