← Could Oscar Lindberg be part of a trade for a defenseman?
Rangers get a lot of shots, but are shut out by Anderson and the Senators →

Rangers back on home ice as they battle the Senators; Brassard comes back to MSG 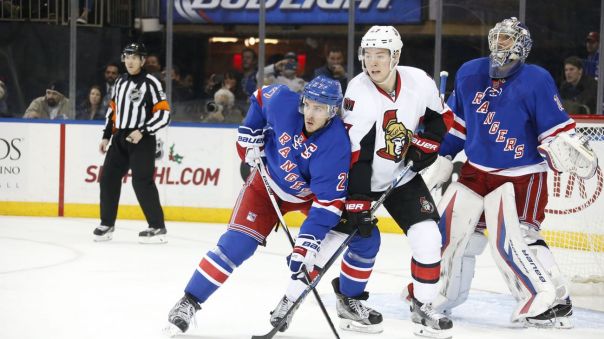 The Rangers (15-6-1) were lucky to escape Philly with a win, but they’ll look to start another win streak tonight when they take on the Ottawa Senators (13-7-1) to kick off a brief two game home stand.

The Rangers were badly outshot, 42-23, in their win over the Flyers, and were able to secure a win thanks to an exceptional goaltending performance from Henrik Lundqvist. Goals from Derek Stepan, Matt Puempel and Kevin Hayes were enough for Hank to steal a victory.

The Senators also won their last game, giving them three straight wins to put them in second place in their division. Dion Phaneuf and Kyle Turris both found the back of the net and Craig Anderson made 30 saves to pick up a win over Carolina.

This is the first of three games between these two teams and the first of two at Madison Square Garden. New York won the season series last year with two wins, allowing just five goals in the three games, including just one goal in two of the contests. Ryan McDonagh led the team with three points (1-2-3) and Henrik Lundqvist was 2-1-0 with a 1.30 GAA and a .949 save percentage (75 saves of 79 shots) in the three games.

Recently, the Rangers have been getting outshot and outpossessed in most games, leading to a streak of three losses in four games before the win over the Flyers. In order to truly turn things around and start looking like a team that should be at the top of the Metropolitan Division, they need to play a better all-around game tonight.

Craig Anderson is expected to start for the Senators tonight. The 10 year veteran has missed some time this year due to his wife being diagnosed with cancer, but he has been spectacular so far. Anderson is 11-4-1 with a 2.15 GAA and a .932 save percentage in 16 starts.

Erik Karlsson is always one of the best defenseman in the entire NHL, consistently racking up points, logging a lot of tough minutes and matching up against some of the best offensive talents in the league. Like most seasons, Karlsson is leading the team in points so far, with four goals and 13 assists for 17 points and a plus-6 rating in 21 games. Karlsson is also a dangerous presence on the power play, so the Rangers will need to be sharp on the penalty kill.

Derick Brassard will be making his return to Madison Square Garden tonight, but this time wearing number 19 and an Ottawa Senators jersey. Brassard was an exceptional player during his time in New York and I have no doubt that he will be greeted warmly. He has struggled a bit in adjusting to his new team, with just nine points (3-6-9) in 21 games. But we all know his talent level and what he is capable of, so don’t be surprised to see him get on the board tonight.

Antti Raanta was the first goalie off of the ice this morning, which means he could wind up getting the start. Henrik Lundqvist made 40 saves on Friday so Vigneault could be looking to give him some rest. Raanta has been fantastic this season and has always given the Rangers a chance to win. In fact, he’s 5-0-0 this season 2.22 GAA and a .934 save percentage.

Matt Puempel made some noise in his Ranger debut, scoring in the first period for his first goal of the season. A former 2011 first round pick of Ottawa, Puempel recently called out his former team and coaches after the Flyers win. “They let you play here, they let you play to your strengths,” Puempel said. “They know there are going to be mistakes. They’re not barking at you every time you come off the ice. It’s beneficial.” He logged 12:32 in that game, which was four minutes more than his average ice time in Ottawa. I think he will be extremely fired up tonight and will be looking to stick it to his former team.

Brady Skjei continues to grow and develop in front of us. Whether it’s a little play that keeps possession or starts a breakout, or whether he’s making fantastic passes leading to scoring chances, Skjei continues to get better and better. He’s tied with JT Miller for second on the team in assists (11) and is getting more ice time and responsibility every game. I think he needs to be a workhorse player along with Ryan McDonagh, with both players logging 22+ minutes a night, and hopefully we get to that point. I also have a feeling that he might net his first career goal tonight.

The Rangers and the Senators will faceoff at Madison Square Garden at 7 p.m. The game will be broadcasted on MSG Network.

← Could Oscar Lindberg be part of a trade for a defenseman?
Rangers get a lot of shots, but are shut out by Anderson and the Senators →