Glass: Half Full or Half Empty? Rangers begin road trip against Tampa Bay 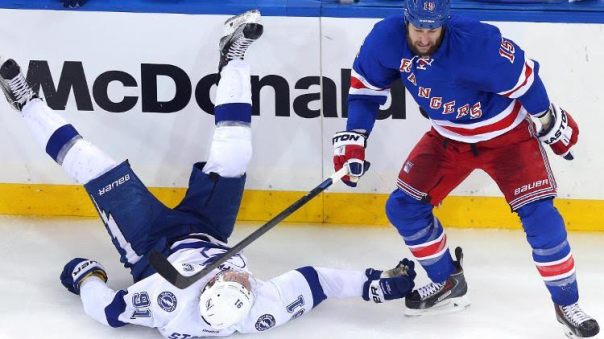 Welp, the stick finally hit the proverbial (Ranger) fan as Coach Alain Vigneault and GM Jeff Gorton apparently had enough of their own lip service as well as that spewing from their players ad nauseum. That’s right. None other than discussion-lightning-rod and AHL-banished forward Tanner Glass was recalled from the Hartford Wolfpack yesterday, along with defenseman Steve Kampfer.

Now, say what you want about Glass – and virtually everyone in Rangerland has – the current state of affairs for this team with only a month left to go in the regular season and the trade deadline in the rearview mirror is indisputable:

1) The team’s forte, its scoring prowess, has all but disappeared, case in point they’ve scored fewer than 2 goals per game over the last 9 while only playing wildcard worthy, .500 hockey.

2) They not only lost to 3 potential Eastern Conference playoff foes last week (CBJ, WSH & MTL), but they did so in alarmingly lifeless, physically overmatched fashion. Granted, this year’s team hasn’t ever been known for its physicality. But up until recently, a high potent offense, a moderately acceptable defense and the return-to-form, elite goaltending from Henrik Lundqvist “masked” what most Blueshirt faithful already knew: this roster, as presently constructed, is simply not gritty enough to play even a period of grind-it-out hockey, let alone an entire game of it. And as many diehards predicted, the happy happy joy joy of those high flying November victories has given way to tight checking, trap-like, shutdown losses in March…and potentially in April, May or, dare I say, June.

3) Against the Caps in particular, the Rangers were noticeably manhandled by the bigger, stronger and clearly hungrier Caps from start to finish. A glaring example of this came in the form of the normally resilient, 4th line forward, Jesper Fast, getting absolutely pummeled by Alex Ovechkin…and receiving a separated shoulder for his troubles. The Habs had an equally dominant time at The Garden, quieting the crowd on the opening shift and never relenting ‘til the final buzzer.

4) It’s become painfully obvious to everyone around the league that there is no need to respect Henrik Lundqvist’s personal space, whether he is inside or outside his crease. But for a few exceptions – Marc Staal’s push-back against MTL’s Lehkonen being one – there is rarely any consequence for running Hank, and the frequency of collisions is ominously increasing. And you can easily trace the cause and effect of this back to when Henrik was literally freight trained by Cody Eakin in Dallas 3 months ago. The team’s collective lack of response to that devastating hit on their franchise player – combined with what’s become an embarrassingly anemic power play – has made it crystal clear that the opposition can freely make it “Open Season on Lundqvists” without any fear of physical retribution or detriment on the scoreboard.

But let’s forget about dropping the gloves or coming to the aid of a teammate for a minute. Just the mere notion of playing simple, hard-hitting, scrappy hockey seems to be a foreign concept for this team…and for the coaching staff. Sure, a large part of the responsibility falls squarely on AV and his staff for the team’s lackluster starts and its inability to motivate and adapt mid-game when things get rough…or slow…or both. But even more alarming is how Assistant Coach Jeff Beukeboom hasn’t been able to instill any sort of moxie into the defense, especially in front of Lundqvist. Now I suppose there is only so much a coach can do with the cards he’s dealt, especially when you consider that prior D Coach Ulf Samuelsson had similar problems with much of the same D corps. But still, Beuke was one of the game’s most physically intimidating blueliners. Yet there doesn’t seem to be an ounce of that fear factor injected into his current sextet, except maybe from Kevin Klein just before he got hurt. And all due respect, Klein and Dan Girardi being injured hasn’t really helped matters much considering both are in the top 5 in the team’s hits. So them being out might partially explain the recent soft play. But as we’ve seen, even when both of them are healthy, it’s not like the slot in front of Hank is no-man’s land for the opposition. Not by a long shot.

Sure, Chris Kreider is a big body who can deliver crushing body checks. And yes, he can even drop the gloves when necessary while also speedily scoring a career-high in goals. But does this organization really want a guy like CK routinely spending 5 minutes in the box simply because no one else will come to the aid of his teammates? Same goes for JT Miller, who has also shown a willingness to step up physically, albeit sporadically. But the scariest notion of all is that Mats Zuccarello is arguably the team’s grittiest, feistiest player out there. Problem is, at 5’ 7” / 180 lbs, The Hobbit is far too often over-matched physically. And when you get right down to it, all 3 of these players are Top 9 forwards. Forwards who are far more valuable on the ice than off it. Not to mention they have shown very little mojo lately like the rest of the team, Kreider’s lower-body injury notwithstanding.

But the truly distressing reality is, Glass probably represents the only real semblance of anything close to traditional “toughness” still left in the Ranger organization. Gone is Dylan McIlrath. Ditto Ryan Callahan, Brandon Dubinsky, Brandon Prust, Derick Dorsett, etc. Heck, even Derick Brassard brought an edge to his game – and to his buddy, Zucc’s game as well – and now even that’s missing. Slowly but surely, Ranger management – not just the coaching staff – has undeniably and methodically weeded out the all-important grit factor that once defined the Black & Blueshirts of yore. And yes, those teams may have been too gritty at the expense of having a potent offense. But the current Rangers are the polar opposite: speed and finesse at the expense of any true grit. Neither is the way to go. Even though times have changed and speed is “in vogue”, you still need the right mix of finesse and intestinal fortitude to be able to adapt to ANY style of play. Regardless of what “era” you’re in. It’s still hockey, damn it!

Anyway, all this being said, I don’t think anyone – even those in favor of the Glass call-up – are of the mind that Tanner is the end-all be-all solution to the team’s problems. Especially when, as a 4th line player and perhaps occasional PKer, TG is only going to play 8 – 10 minutes max. A straw poll across social media of Glass’s potential impact, so to speak, indicates that roughly 75% of those commenting don’t think Tanner is the answer, either because of his own limitations or because 1 skater among 18 can only do so much. And while that may be true to some extent, the idea is that Tanner’s physical play and/or watch-your-back responses might set some sort of example for his teammates and inspire them to do the same. Let’s hope so.

This is the second of three meetings between the Rangers and the Lightning this season and the first in Tampa Bay. The Rangers were victorious in that one, winning 6-1, and getting a hat trick from Michael Grabner. JT Miller had a goal and two assists while Kevin Hayes had three assists. Antti Raanta stopped 31 of the 32 shots he faced.

This morning, Adam Clendening, Matt Puempel and Michael Grabner all skated with Antti Raanta. Grabner looks close to returning from his sore hip and could play tonight. The newly called up Tanner Glass and Steve Kampfer are expected to slot into the lineup tonight.

The Rangers and the Lightning will face off at the Amalie Arena at 7:30 p.m. The game will be broadcasted on MSG Network.