Christopher James Kreider is not your average NHL player.  The 25 year old Boxford, Massachusetts native plays guitar, speaks several languages, has an appetite for literature and is a cerebral guy on many levels.  This is in addition to having a full time job as a left winger for the NY Rangers.

Kreider grew up playing ice hockey but like many natural athletes, he played other sports as well – soccer and lacrosse being two he excelled at during his high school years.  Chris was good at the game as a child, but at the high school and college level, he was a virtual hockey prodigy.  Kreider attended Masconomet Regional High School in Boxford, Mass for two years before transferring to the exclusive prep school Phillips Academy in Andover, Mass.  He agreed to enter Andover as a repeat sophomore but was able to graduate in 2 years by taking an accelerated summer program at the end of his final year.  During his final season at the school, Kreider had 56 points in just 26 games and earned National Prep Player of the Year.  He was the highest ranked (14th overall for the NHL draft) and most talked about high school player in the US. END_OF_DOCUMENT_TOKEN_TO_BE_REPLACED 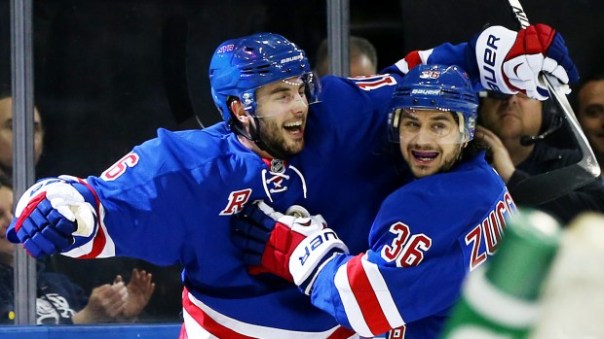 Derick Brassard and Mats Zuccarello have built a ton of chemistry since last season, and have played well together this season. Alongside Rick Nash, they will get an opportunity on the Rangers top power play unit. Photo courtesy of Getty Images.

Following the sloppy victory over the Maple Leafs last night, the Rangers practiced in Toronto ahead of their travel to Denver for their game against the Avalanche tomorrow at 9 PM.

In that game, we saw a resurgent Mats Zuccarello, who extended his point streak to a career high six games, scoring two goals, including the game winner. While he has always been a great passer, and continued to rack up assists during his goal drought, Tuesday night saw him register five shots on goal, which is something that Vigneault and Zuccarello both knew needed to change. END_OF_DOCUMENT_TOKEN_TO_BE_REPLACED

The Rangers found a way to avoid a collapse, thanks to a Mats Zuccarello game winner in the late stages of the third period. Photo courtesy of Getty Images.

It wasn’t pretty, but the Rangers (31-16-5) found a way to get a win on the road against the Toronto Maple Leafs, avoiding a late game collapse and coming away with a 5-4 victory at the Air Canada Centre. Toronto scored two goals early in the second period to tie the game at four, but Mats Zuccarello came through in the clutch, sending the Rangers to Colorado with two points.

Offense was certainly not the problem, as the Rangers managed to find twine five times, including two goals from Zuccarello, on a total of 39 shots. 31 of those shots came in the first two periods alone.

The Rangers struggled in the faceoff circle again, winning just 40 percent (27/67) of their draws. This has been a continued problem, with Kevin Hayes and Derek Stepan the two worst faceoff guys on the team. It has gotten them into trouble, and may be something that needs to be addressed. END_OF_DOCUMENT_TOKEN_TO_BE_REPLACED 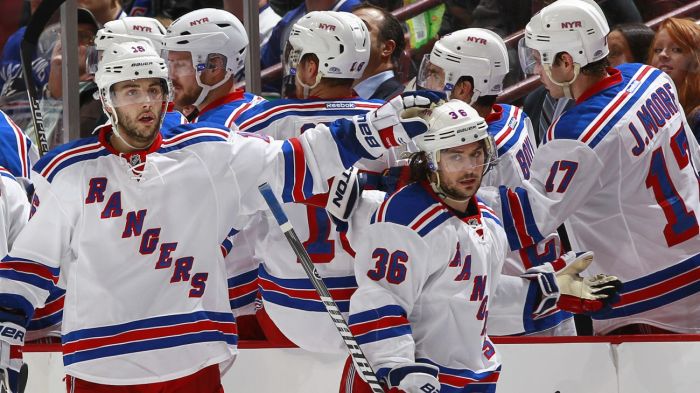 Mats Zuccarello and Derick Brassard, part of arguably the Rangers best line over the past few games, will look to help the Rangers take down the Maple Leafs in Toronto on Tuesday Night. Photo courtesy of Getty Images.

The Rangers (30-16-5) will look to end their brief two game winless skid when they travel to Toronto to take on the Maple Leafs (23-27-4) at the Air Canada Centre in the third and final meeting between the two teams this season.

With an overtime loss on Sunday, the Rangers are 3-3-1 since the All Star Break.

The Rangers have dropped the first two games against the Maple Leafs this season, including a 6-3 shellacking in the home opener, and a 5-4 loss in Toronto on November 8th. In the first meeting, the Rangers saw Toronto score five goals in the second period, with Lee Stempniak, Rick Nash, and Derick Brassard all scoring in the losing effort. END_OF_DOCUMENT_TOKEN_TO_BE_REPLACED

Cam Talbot made 23 saves, but the Rangers could not come away with a win, dropping their second straight game, but this one came in overtime. Photo courtesy of MSG Photos.

Despite a sloppy game, the Rangers (30-16-5) managed to pick up a crucial point against the Dallas Stars (24-21-8) at Madison Square Garden, losing early in overtime by a final score of 3-2.

It looked like the Stars were going to win in regulation, but Chris Kreider scored a clutch goal to send the Rangers to overtime.

It was a relatively sloppy game, with the Rangers struggling to carry the puck through the neutral zone and to clear their own zone. They also seemed to have trouble keeping the puck in at the blue line, often losing possession that way. Basically, the fact that they were playing the second game of a back-to-back showed, for both teams. END_OF_DOCUMENT_TOKEN_TO_BE_REPLACED