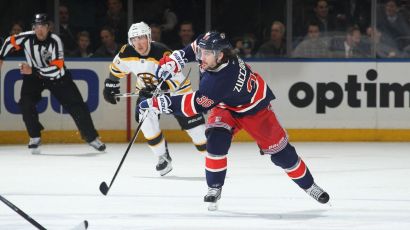 The Rangers received their second loss of the pre-season against the Bruins at TD Garden in Thursday night’s matchup. Some key players to watch this preseason are Hayes, Gibbons, and Oscar Lindberg from the Rangers’ lineup. Patrice Bergeron and Spooner from the Bruins stood out, as well.

Some familiar faces, including Glass, Nash, Boyle, McDonagh, Brassard, Yandle, and The King, Lundqvist, were back in action for the Rangers.

Joe Micheletti said before the game that Rick Nash is in “superb condition”, and he proved it with his strong checking and physical play. He mentioned that the Rangers intend to focus on each individual game, a strategy that has been in play for this team for a while now. END_OF_DOCUMENT_TOKEN_TO_BE_REPLACED 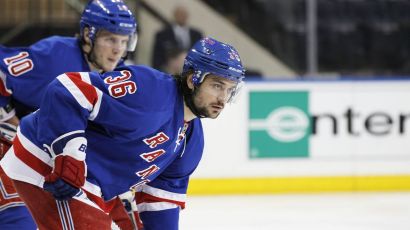 Mats Zuccarello will be back in a Rangers jersey tonight. Photo courtesy of MSG Photos.

The Rangers and GM Jeff Gorton have announced that the team has assigned 19 of their training camp invitees.

Jacob Smith was released from his tryout agreement. END_OF_DOCUMENT_TOKEN_TO_BE_REPLACED

Rangers back on the ice at informal skate; Zuccarello “As good as new” 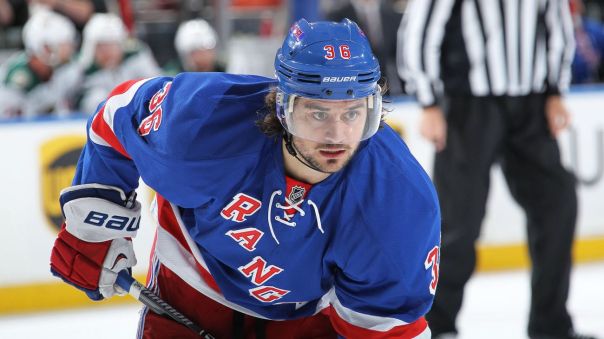 Mats Zuccarello is healthy and ready to have an impact on the ice with the Rangers this season. Photo courtesy of MSG Photos.

For the first time in quite a while, the New York Rangers were back on the ice, participating in an informal skate while getting re-acclimated to the ice at the MSG Training Center in Tarrytown, New York.

Almost all of the Rangers players were on the ice for the Tuesday afternoon scrimmage, excluding Henrik Lundqvist and Captain Ryan McDonagh, who are both away participating in the NHL Player Media tour. Amongst the mainstays and newcomers at the scrimmage was Mats Zuccarello, five months removed from a scary head injury.

In Game 5 against the Pittsburgh Penguins, Zuccarello was struck upside the head by a puck, causing him to miss the remaining 14 games of the playoffs, and leading to some scary symptoms. He suffered a brain contusion, a skull fracture, and the loss of speech for four days.

Thankfully, Zuccarello has said that all of the symptoms stemming from his head injury have subsided, and that he will not have any side-effects heading into the season. Although he still needs to get accustomed to skating and playing hockey again, his health is fine, which is most important. END_OF_DOCUMENT_TOKEN_TO_BE_REPLACED 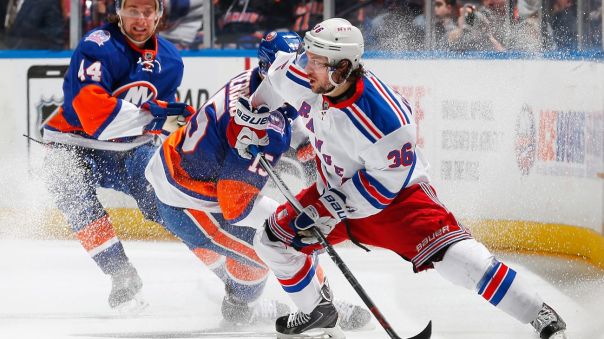 While every team certainly deals with injuries in the playoffs, the Rangers had quite a lot of significant health issues to some of their key players during their run to the Eastern Conference Finals.

The captain Ryan McDonagh broke his foot in Game 4 against the Tampa Bay Lightning, Dan Girardi and Marc Staal had procedures done on their ankles, and Derick Brassard had to undergo wrist surgery. And of course, Mats Zuccarello missed the last two rounds of the playoffs with the worst injury, after being struck on the side of the head by a puck.

The puck came off of the stick of Ryan McDonagh, as a slap shot went awry and hit Zuccarello upside the head during Game 5 against the Pittsburgh Penguins. Nobody officially knew the extent of the injuries until after the playoffs. END_OF_DOCUMENT_TOKEN_TO_BE_REPLACED 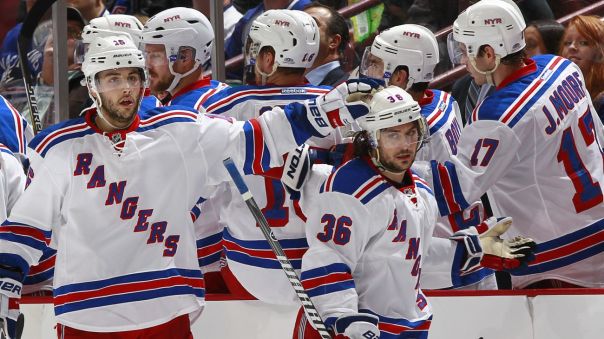 Mats Zuccarello and Derick Brassard are two players that should remain together for the upcoming season. Photo courtesy of Getty Images.

Since the 2011-12 season, when the Rangers began to consistently make long runs in the playoffs, there has been a lot of roster turnover. Every year, different players are shown the door, whether it be through trades or free agency, and new people are brought in to replace them.

Despite the constant change, the Rangers have managed to stay competitive, consistent, and retain a very strong, young core group of guys. This year was no different, with the forward group set to almost completely change for the upcoming season.

If assembled right, and if some of the young talent pans out, then this year’s team has the chance to be even better than last year’s Eastern Conference Finalist team. With a great balance of veteran leadership, star power, and youth, we could see big things in New York for the 2015-16 NHL season. END_OF_DOCUMENT_TOKEN_TO_BE_REPLACED