Alec Martinez scores the game winning goal in OT of Game 5 to give the Kings their second cup victory in 3 years.

On June 13th, 2014, Alec Martinez scored a goal at 14:43 of the double overtime period that sealed the New York Rangers fate and ended their amazing run to the Stanley Cup Finals.

Counted out by most experts and many fans, the Rangers were hardly expected to make it out of the first round. But they managed to defeat the Philadelphia Flyers in 7 games, come back from a three games to one deficit against the Pittsburgh Penguins, and beat the Montreal Canadiens in Eastern Conference Final, clinching their first Stanley Cup Final appearance since the 1994 Rangers hoisted the trophy.

The season didn’t begin well for the team either. After firing head coach John Tortorella, the Rangers and new head coach Alain Vigneault began the season with a rare nine game road trip, due to final renovations at Madison Square Garden. The first eight games did not look promising, as the Rangers began 2-6, and saw veteran backup Marty Biron retire after being placed on waivers. Biron was replaced by undrafted rookie Cam Talbot.

Fans and the media were panicking, wondering if the team was doomed from the start. Vigneault and the Rangers answered that question in the ninth game of the season.

Derick Brassard shoots one past Red Wings goalie Jimmy Howard in overtime in a game where the Rangers desperately needed a win.

The final game of the road trip, the Rangers laced up to face the Detroit Red Wings at Joe Louis Arena with Talbot in net. In desperate need of a win, they managed to do just that, winning with just under 13 seconds left in overtime on a Derick Brassard breakaway goal.

The Rangers went on to win 7 of their next 10 games, and were able to steady themselves for the rest of the season, despite having some injury concerns to key players like Ryan Callahan and Rick Nash, as well as some goalie struggles for Henrik Lundqvist in the middle of the season.

The Rangers managed to overcome that, and provide the fans with one of the best seasons since 1994, one full of memories.

On January 4th, following a humiliating 5-2 loss to the Penguins the night before, the Rangers exploded for 7 goals against the Maple Leafs in a 7-1 victory. New York goals were scored by Hagelin, Dominic Moore, Pouliot, Kreider, Richards, and Boyle.

The Rangers played two outdoor games at Yankee Stadium on January 26th and 29th. They managed to win both, beating the New Jersey Devils by a score of 7-3 and beating the Islanders 2-1, respectively.

On March 5th, after multiple failures at a contract extension, the Rangers traded their homegrown captain Ryan Callahan for a seasoned vet and a potent goal scorer, Tampa Bay Lightning captain Martin St. Louis. This was the biggest move of the season and would ultimately have a huge impact on the Rangers’ journey to the Finals.

The Rangers acquired Martin St. Louis in a trade that sent captain Ryan Callahan to Tampa Bay along with two draft picks. St. Louis would go on to have a huge impact in the playoffs and was a key part in getting them to the Stanley up Finals

On March 18th, Henrik Lundqvist surpassed Rangers’ great Mike Richter for most wins by a Rangers’ goalie, with his 302nd career win over the Senators. Only four days later, Lundqvist recorded his 50th career shutout as a Ranger to surpass Eddie Giacomin for first on the list.

On April 30th, the Rangers beat the Flyers in Game 7 by a score of 2-1 to advance to the second round, with goals coming from Beniot Pouliot and Dan Carcillo, to go with 26 saves from Lundqvist. This marked the first time that the Rangers and Flyers had faced each other in the playoffs since 1997.

On May 7th, the Rangers completed the miraculous comeback in game 7 against the heavily favored Pittsburgh Penguins. After being down 3-1, New York won three straight to advance to the Eastern Conference Finals. This series provided many memorable moments. There was the two overtime goals in Game 1, after Brassard’s shot had been ruled a no goal and Pouliot stuffed it into the net for the second time. There was Martin St. Louis’ goal on Mother’s Day at the Garden in Game 6, just days after his own mother had passed away. And of course, Brad Richards goal in Game 7 to complete the comeback against the Penguins.

And on May 29th, the New York Rangers defeated the Montreal Canadiens by a score of 1-0 in Game 6 to clinch their first Stanley Cup Finals appearance since winning it all in 1994. This series had arguably one of my personal favorite New York Rangers moment ever (I was born in 1995), and the moment that most likely made all ranger fans fall in love with number 26; Martin St. Louis’s game winning, overtime goal in Game 4 to give New York a commanding 3-1 series lead. Dominic Moore would score the goal in Game 6 to send New York to the Finals.

The 2013-2014 New York Rangers posing with the Prince of Wales Trophy after beating Montreal in Game 6 of the Eastern Conference Finals.

Obviously, the Rangers had tons of incredible games and moments this season in their incredible adventure to the Finals. The goaltending was superb, unlikely heroes stepped up each and every night, and a team bonded together to become a family.

Now, with the Rangers only a day away from the season opener Thursday night against the St. Louis Blues, there is no reason to believe that the Rangers cannot take it a step further.

After the Finals, the Rangers lost many of their key players to free agency.

Brad Richards was bought out of the remainder of his contract with New York and signed a 1 year, $2 million contract with the Blackhawks.

Beniot Pouliot signed a 5 year, $20 million deal with Edmonton after having a breakout season in New York on their high powered third line.

There was concern that the Rangers had lost too many key pieces from last season in order to stay successful. After New York’s training camp and preseason, that is clearly not the case. 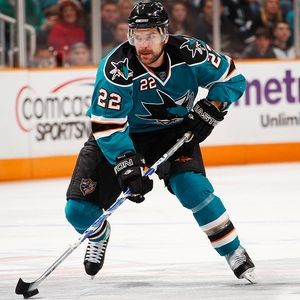 Veteran defenseman Dan Boyle will provide a right-hand shot on the powerplay, and will most likely replace Anton Stralman on the second line.

In the offseason, the Rangers signed veteran defenseman Dan Boyle, and a teammate of St. Louis from 2002-08 in Tampa, to a 2 year, $9 million contract. The 38 year old Boyle, who has been very productive on the powerplay in his career, is expected to skate alongside Marc Staal. He also provides a right-handed shot who knows how to run the powerplay, something the Rangers desperately needed.

Defenseman John Moore was also signed to an extension in the offseason, and is expected to remain on the third line with Kevin Klein.

Another area New York addressed was their forward depth issues, signing veteran center Matthew Lombardi, winger Lee Stempniak, and winger Ryan Malone. They also signed Tanner Glass, who adds some toughness to the team and is a solid penalty killer.

The Rangers also managed to land a coveted prospect on the free agent market by signing forward Kevin Hayes. Hayes was drafted 24th overall in the 2010 draft by Chicago, but declined to sign a contract with the Blackhawks.

Hayes is a product of Boston College, known for their tremendous hockey program, where he finished his senior season as a finalist for the Hobey Baker Award for the top college player, after putting up 65 points in 40 games.

Hayes is listed at 6-foot-4 and 216 pounds, and was a sophomore on the 2012 Boston College national championship team with fellow Ranger Chris Kreider.

There were also a few breakout stars in training camp and the preseason for the Rangers. The most notable is the 19 year old left winger Anthony Duclair.

Duclair, already affectionately nicknamed “The Duke,” was drafted 80th overall in the 2013 draft and has shown in the past signs of being an elite scorer. While playing for the Quebec Ramparts in the QMJHL, Duclair scored 50 goals along with 49 assists in just 50 games. 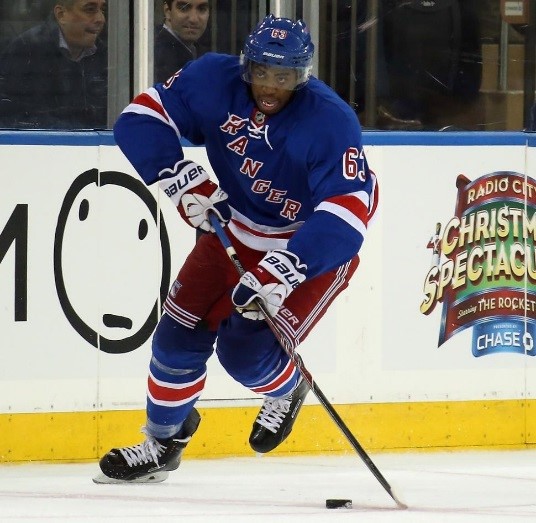 Duclair’s efforts were awarded with the Lars Sjoberg award, given to the best Rangers rookie in training camp and preseason. He will also begin the season with the Rangers in their starting lineup. If he performs up to the expectations of management and the coaching staff, he will stay for longer than his 9 games allotted before his entry level contract kicks in.

Jesper Fast and JT Miller also have made strides of improvement. Miller was praised by his coaches for his boost in conditioning, and will play a much bigger role this year, centering the third line, and possibly higher, especially with Derek Stepan out for a minimum of 10 games with a non-displaced fractured fibula.

Fast also had a nice preseason, scoring a total of 3 goals and earning praise from Vigneault for his speed and his smart play.

The full roster for opening night is listed below:

The Rangers also announced the new Captain and alternate captains for the upcoming season. Fan-favorite Ryan McDonagh was named the 27th captain in New York Rangers history, with the alternates going to Derek Stepan, Martin St. Louis, Dan Girardi and Marc Staal. It is believed that the alternates will switch between home and road games. 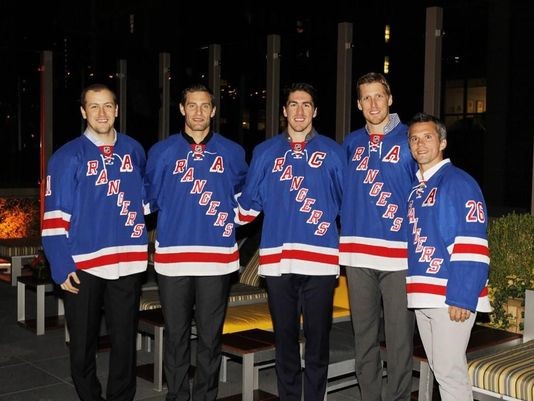 With the emergence of young stars, key offseason pickups and re-signings, and a brand new captain, the Rangers are ready to tackle the 2014 season head on.

The roster is full of youth, speed, experience, and skill, and once Stepan recovers from his injury, New York will have their full lineup in effect.

Contrary to many people’s beliefs, the Rangers did not get worse in the offseason. In fact, they may have gotten better.

With a lot of depth at the wings, a rock solid defensive core, and a good mix of youth and veteran experience amongst the forwards, the New York Rangers are poised to make another run at the Stanley Cup.