The day we all have been waiting for is finally here. Tonight, at 8 PM, after 118 days of waiting, the Rangers begin the 2014-2015 season against the St. Louis Blues on the road.

Tonight’s lineup will look a lot different from last years, and four of the skaters tonight will be making their Rangers debut. Those four are Tanner Glass, Anthony Duclair, Lee Stempniak and Dan Boyle.

While all the skaters will be integral to the performance tonight, there are some that Rangers fans should specifically be watching during the game.

Martin St. Louis will take over center roles on the first line until Derek Stepan returns.

The 5-foot-8 right-winger will take on a completely different role in the season opener as well as for the first few weeks after that. With Derek Stepan out of the lineup for at least 10 games, St. Louis will be sliding into the center position on the first line, a position has played a few times throughout his career.

St. Louis is not just a sniper, he also knows how to effectively move the puck and set up plays for his teammates. Being a good passer and having good vision will certainly help ease him into this new position.

This will also be the beginning of St. Louis’ first full season with New York. Last season, after being traded, St. Louis played the last 19 games of the regular season as well as all of New York’s playoff games.

With a full season ahead of him, it will be exciting to see if he can reach the 30 goal mark or point-per-game status he has hit many times throughout his career. 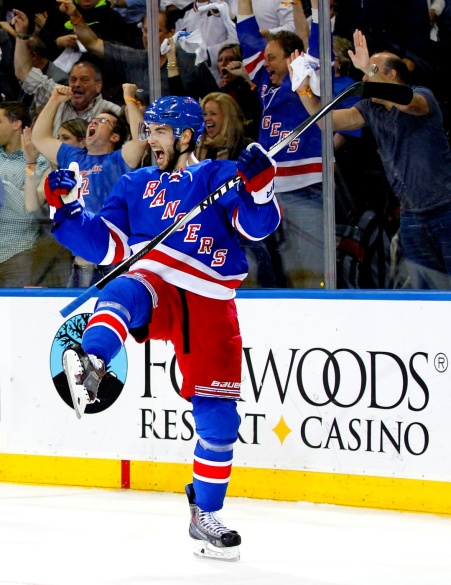 Derick Brassard will play a more important role this season, moving up to center the Rangers’ second line.

After signing a 5 year, $25 million deal this offseason, Brassard will take on a bigger role with the Rangers.

After the departure of Brad Richards, Brassard will slide up and fill in the now vacant second line center spot.

Last season, Brassard established career highs in goals last season with 18, as well as a solid 27 assists, for a total of 45 points. He also had 6 goals and 6 assists in 23 playoff games.

Brassard is expected to raise both his goals and assists totals, and prove that he is a true top-6 center. Having Zuccarello on his line again and more time on the ice will definitely help, considering the great chemistry the two established last season.

The 19 year old rookie Anthony Duclair managed to crack the Rangers’ opening night roster and will look to continue to impress and score goals.

Duclair is one of the most exciting Rangers’ rookies in recent memory, and the 19-year-old left winger managed to earn himself a spot in the starting lineup after a stellar training camp and preseason.

Duclair scored 3 goals along with 2 assists in 5 preseason contests, and showed great speed, shooting ability, and hockey knowledge. He earned praise from the coaching staff and management, as well as becoming an early favorite of MSG broadcasters Sam Rosen and Joe Michelitti.

Anthony Duclair may see top six minutes, mainly due to the fact that Vigneault loves to switch up the lines during the game, but will likely start on the third line tonight.

It will be interesting to see Duclair as he takes on a full NHL team in the regular season with more pressure then was placed on him in the preseason.

Anthony Duclair will become the first player in franchise history to wear number 63. Will he be able to make that number one that will plant itself in people’s memories? Ranger fans everywhere are ecstatic to find out the answer to that.

Boyle, who was not offered a contract by the San Jose Sharks following last season, had somewhat of a down year last year when compared to his previous seasons, but still very solid year at that.

Boyle scored 12 goals last year to go along with his 24 assists, bringing his point total to 36 over the course of 75 games.

Boyle was brought in to fill in the slot left by Anton Stralman after he signed with Tampa Bay.

Assuming the Rangers will draw at least one penalty tonight, Boyle will be manning the power play for the Rangers, something he has effectively done throughout his career. With Brad Richards gone, Boyle will take over his role while the team is up a man on the ice.

Boyle also provides a right-handed shot on the power play, which is very nice considering that he will line up with McDonagh, who shoots lefty, while they’re a man up.

Ranger fans are hoping that Dan Boyle can help solidify the power play as well as playing solid defense on the other end.

Other players to look out for are JT Miller, Carl Hagelin, and Jesper Fast. Miller will get his chance to prove he can be a quality center for the team, after playing practically all of the forward positions last season. He will be centering the third line for tonight’s game.

Hagelin will be bumped up to play the second line alongside Brassard and Zuccarello, mainly due to the shortage of centers and changing positions. This should make for an extremely fast line, something AV loves, and a fun one to watch.

Jesper Fast cracked the opening night roster, after a very good preseason in which he scored a total of three goals. He will play right wing on the fourth line and will look to continue his goal scoring streak.

And of course, Ryan McDonagh will play in his first game as captain of the New York Rangers. A respected leader both on and off the ice, McDonagh will look to continue excellent play from last year.