← Rangers ready to take on Edmonton at The Garden
Jesper Fast recalled from Hartford; Malone and Allen reassigned →

Rangers dominated at home by Edmonton; Lundqvist shines in loss 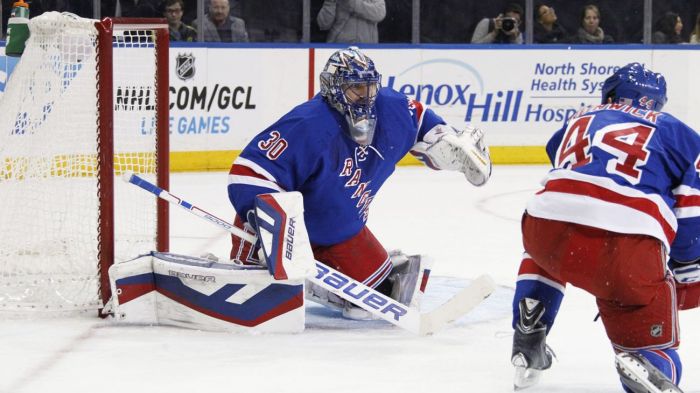 Henrik Lundqvist was one of the lone bright spots for the Rangers tonight, making 30 saves to keep New York in the game until the end. Photo courtesy of MSG Photos.

The Rangers (6-5-2) came home to face the Edmonton Oilers (5-8-1), but were completely overwhelmed by an Edmonton team that is 29th in the NHL in goals allowed average, and fell by a final score of 3-1.

The Rangers only managed to put 21 shots on net, and made Viktor Fasth look like Johnathan Quick, as they never really pressured him throughout the game. New York felt a step behind the entire game and couldn’t establish a lot of puck possession throughout the game.

Henrik Lundqvist was phenomenal, making 30 saves on the 32 shots that he faced, including an early save of the year candidate on Justin Schultz, reaching out with the glove to stop him right on the doorstep.

Beniot Pouliot had a successful return to MSG against his former team, scoring the second goal of the game and assisting on the first goal. Although he’s been struggling this season, Pouliot played very well tonight for Edmonton.

Edmonton started out strong, nearly scoring on a bad turnover by Dan Girardi, but Lundqvist was there to bail out the Rangers.

Edmonton would score shortly after that, lust over three minutes into the game, with the Oilers star-center Ryan Nugent-Hopkins putting it in the back of the net. The Oilers were working the puck behind the net, and eventualy got the puck to Jordan Eberle, who made a cross-crease pass to Nugent-Hopkins in front for the Oilers first goal of the game.

Edmonton had most of the chances and puck possession, outshooting the Rangers 7-1 in the first 7:30 of the game.

The Rangers would get a break on one of their shots, when Hagelin took the wrist shot from just outside the faceoff circle. His shot deflected off of an Edmonton defenser’s stick and bounced past Fasth, tying the game with just under 8 minutes to go. 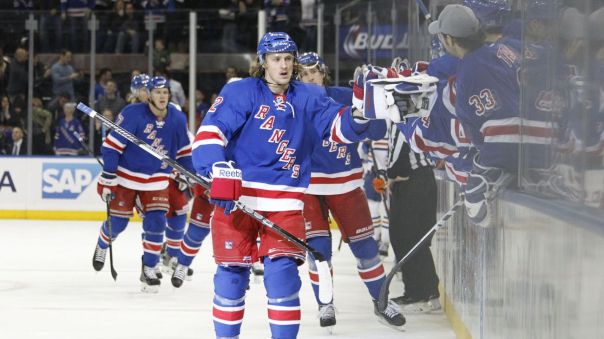 Carl Hagelin scored his fourth goal of the season, assisted by Kevin Hayes and Lee Stempniak. Hagelin has scored four times in his last nine games, as well as goals in his last two games. Photo courtesy of MSG Photos.

At the end of the period, the Rangers were outshot 11-8, but picked up their play after the goal by Hagelin.

Henrik made a few key saves early in the second period, most notably a save on Matt Hendricks, who had a short-handed breakaway.

Edmonton would manage to get one past Lundqvist in the second, and it was the former Ranger Beniot Pouliot cashing in on his chance. Ryan Nugent-Hopkins started the play, using his speed to blow through the neutral zone, and using a nifty move to get the puck to Pouliot, and he promptly sniped it past Lundqvist, going top shelf to make it 2-1 Edmonton.

The Oilers had all the chances in this period, and could have scored a few more times, but Henrik Lundqvist kept the Rangers in it, especially with his glove save that robbed Justin Schultz after he received a great pass from Beniot Pouliot. If you can find a highlight video of the save, definitely watch it, it was incredible. 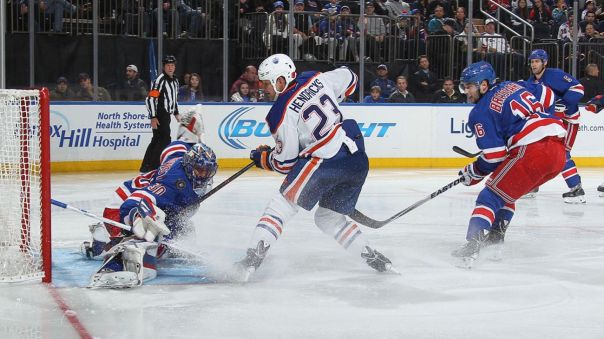 Henrik Lundqvist played very well in his return to the net, making some highlight-reel saves like this one on Matt Hendricks. Photo courtesy of MSG Photos.

Edmonton had total control this period, outshooting the Rangers 13-6, with New York getting minimal chances and having next to no puck possession.

The third period started out strong for the Oilers again, with Eberle walking into the Rangers zone and shooting one off the pipe.

Henrik continued to make save after save, bailing out his defenseman and other skaters who made turnovers in the Rangers’ zone.

Edmonton was extremely strong on the puck, not allowing the Rangers to establish anything on offense. The Rangers didn’t have a shot on goal for the first 10 minutes of the period, and were shut down like they were for the majority of the game.

The best chance of the game came for Kevin Hayes, who nearly put in a backhanded shot, but Fasth made the stop. Hayes was one of the better forwards tonight, creating a ton of chances late in the game, using his body to control the puck, and doing his best to spark the Rangers comeback late. Vigneault went to the line of Hagelin-Hayes-Duclair in the third period, which is a line I would love to see stick together in the future. 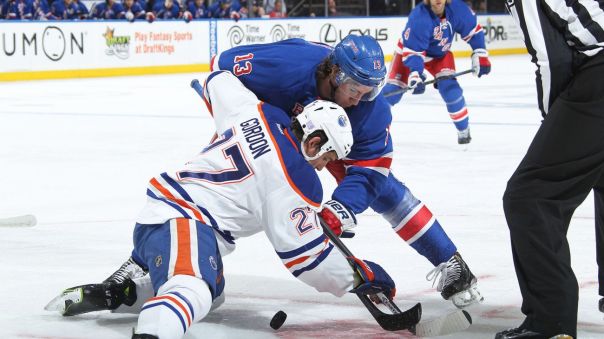 Kevin Hayes had a nice game tonight, assisting on the lone goal for New York, and nearly scoring on a few occasions. Hayes looks as if he is becoming more comfortable playing in the NHL, and looks better as the season progresses. Photo courtesy of MSG Photos.

The Rangers could not score in the third period, and they pulled Lundqvist with two minutes left in the game. That backfired, as Teddy Purcell easily gained control of the puck and put it in the empty net, sealing the victory for Edmonton.

As Marc Staal said, this game was a “wakeup call,” and the Rangers “need to start playing better hockey.” The Rangers should not have lost a game at home to the Edmonton Oilers, who had given up 50 goals in the first 14 games that they play. After a game in Toronto that they should have won, the Rangers came out tonight flat, making it two disappointing losses in a row.

Although Edmonton’s goals were all good goals, the Rangers made a few turnovers in their own zone that went right to the Oilers. Luckily, Henrik bailed them out, but the score could have been a lot worse.

Speaking of Lundqvist, he was sensational. Henrik was by far the best player for the Rangers, and he was the only reason that they had a chance to win this game. He made 30 saves on 32 shots, and made some highlight reel saves as well.

Kevin Hayes had a nice game for the Rangers. He was bumped up to the third line, and the line with him and Hagelin and Duclair played well at the end of the game. Hayes also is always in good defensive position, and has been used on the penalty kill at times. Hayes looks as if he is becoming more comfortable playing at the NHL level, and played well tonight.

Carl Hagelin scored for the second game in a row, with this goal being his fourth of the season. All four goals have come in the last nine games, and it’s nice to see some production from Hagelin, who had a very good postseason during last year’s run. 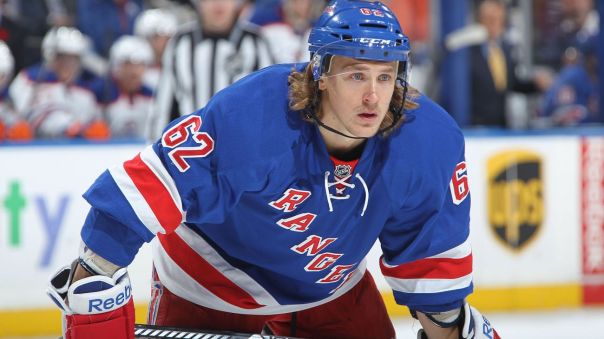 Carl Hagelin has picked up his play recently, scoring his fourth goal of the season as well as playing well defensively and on the power play. Photo courtesy of MSG Photos.

The Rangers next game is Tuesday night against the Penguins at home. New York will need to play a lot better if they expect to compete with one of the best teams in the Eastern Conference.

← Rangers ready to take on Edmonton at The Garden
Jesper Fast recalled from Hartford; Malone and Allen reassigned →