Rangers host Lightning in homecoming match; Duclair back into the starting lineup 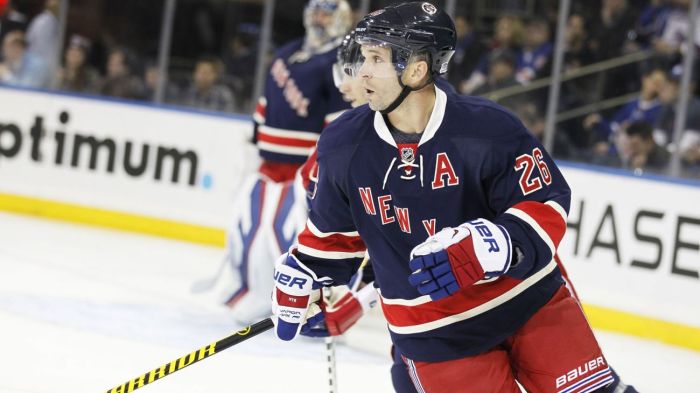 When the Rangers (7-6-4) take the ice against the Tampa Bay Lightning (12-4-2), it will mark the first time that ex-captain Ryan Callahan, Brian Boyle and Anton Stralman face the Rangers since joining the Lightning.

Ryan Callahan was traded to the Lightning for Martin St. Louis at the trade deadline after Callahan and the Rangers could not agree on a contract extension. St. Louis became a ranger and was an integral part in propelling the team to the Stanley Cup Finals.

Brian Boyle and Anton Stralman were also helpful and popular players during their time in New York. Boyle was great in the faceoff circle and was a phenomenal penalty killer. Stralman was a solid second line defensemen who can join the rush and contribute offensively.

It will also be the first time that Martin St. Louis, former captain of the Lightning, will face off against his previous team, setting the stage for an emotional match between the two teams.

“I expect to have butterflies early on,” said Martin St. Louis. “But that will pass after a shift or two.”

Outside of the returning players, this is an important hockey game for New York. The Rangers are coming off of two consecutive shootout losses, most notable the frustrating loss to the Penguins. In both games, they gave up third period leads, marking the 13th time they have blown regulation leads, an alarming statistic.

In order to get back on track, beating a red-hot Lightning team in an emotional home matchup would certainly be a start.

The Rangers have made one lineup change, something many fans have been asking for this week.

Anthony Duclair will be back in the lineup tonight after being a healthy scratch the last three games. During the Morning skate, Duclair was on a line with Kevin Hayes and Carl Hagelin, which would be the Rangers third line. Duclair and Hagelin provide blazing speed on the wings, and sets up what could be a very solid line for New York.

After being a healthy scratch for the past three games, Anthony Duclair will skate alongside Kevin Hayes and Carl Hagelin on the third line. Photo courtesy of MSG Photos.

In 12 games, Duclair has six points (1-5-6) alongside a plus-four rating. He has proven to be very responsible with the puck and has improved on the defensive side as well.

Stempniak will join Dom Moore and Tanner Glass on the fourth line, which adds offensive ability to the line as well as remaining strong defensively. Stempniak has played well with Moore, and the Rangers really needed to balance out the scoring so that they can effectively roll four lines.

For Duclair, tonight’s game serves as a big test. After sitting out the last three games, “The Duke” gets his chance on a skilled and speedy third line. It is important for Duclair to have a good game tonight and prove to Vigneault that he should be an every day starter. Personally, I also think it helps to balance out the offense on all four lines, and improves the third line dramatically.

Henrik Lundqvist will be back in net for the Rangers, and is looking to follow up his 36 save performance against the Penguins with another strong start tonight.

Henrik Lundqvist (7-4-3) will be in net tonight following his fantastic performance against the Penguins on Saturday. He will be up against the strongest offense in the league, in first place with 66 goals in 18 games. The Lighting are led by Steven Stamkos (11-8-19), with players like Tyler Johnson, Valtteri Filppula, and Ryan Callahan also contributing.

Ben Bishop, a Vezina Finalist last season, is off to a great start, carrying a 10-2-2 record alongside his 2.34 GAA and a .918 save percentage. It is not guaranteed that he will start however, because the Lightning play tomorrow night against the Islanders.

Lundqvist and the Rangers defense will have to be very strong tonight, as the Lightning have four lines that can score goals.

The players to watch are clearly the two former captains, Ryan Callahan and Martin St. Louis. Both players will be facing off against their former teams for the first time since the trade, and Callahan will be back at the Garden for the first time as well. Both of them have identical stat lines (6-7-13), and both of them scored in their last game.

Callahan has missed some time due to injury, but has 13 points in 13 games. In the Lightning’s last game against the Islanders, Callahan picked up a goal and an assist. Since Cally has been a member of the Lightning, the Bolts are 11-0 when he scores a goal.

Ryan Callahan will be making his first start against his former team, as well as his first start back at Madison Square Garden. The 29-year old winger has six goals and seven assists in 13 games this season.

Martin St. Louis has been the hotter of the two, scoring five goals and two assists in his last seven games. Both should be very motivated, and I expect big games from St. Louis and Callahan.

The Rangers face off against Tampa Bay at 7 PM at Madison Square Garden. The game will be televised on MSG.