← Rangers struck down by Lightning; Dan Boyle scores first goal as a Ranger
UPDATE: Tanner Glass out with the Flu, Ryan McDonagh back in the lineup against Flyers →

Practice Report: Stempniak back in, Talbot to start in Philly 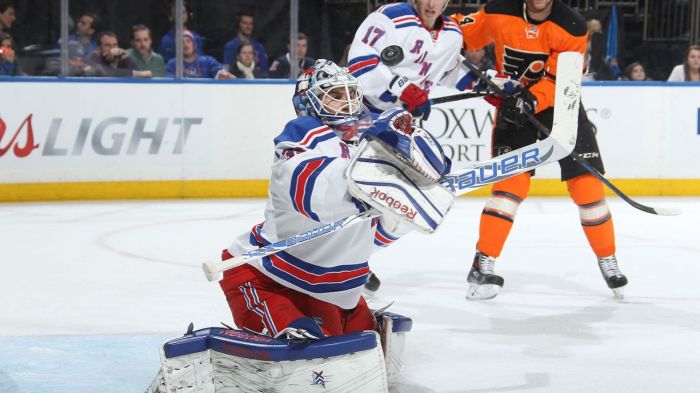 The Rangers and Flyers will play the first game of a home-and-home tomorrow afternoon at the Wells Fargo Center, and Cam Talbot will be back in net for the New York. Photo courtesy of MSG Photos.

After the loss in Tampa Bay yesterday, the Rangers (9-8-4) will make a few lineup changes as they prepare to face off against the Philadelphia Flyers (8-10-3) in the Wells Fargo Center.

Because the Rangers are playing two games in two straight days, Cam Talbot will get the nod for tomorrow’s game. The last game that Talbot played was against the Flyers on November 19th, where he earned his first victory with a 2-0 shutout win.

During today’s practice, Ryan McDonagh was paired with Dan Girardi, and participating in all of the drills. All signs point to him returning for tomorrow’s game, which would really bolster the Rangers defense, and give them their entire starting lineup for the first time since the season opener.

If Moore is the healthy scratch, that would mean that Matt Hunwick would remain in the lineup. Hunwick has been in the lineup since Dan Boyle’s injury, and has been a good replacement. 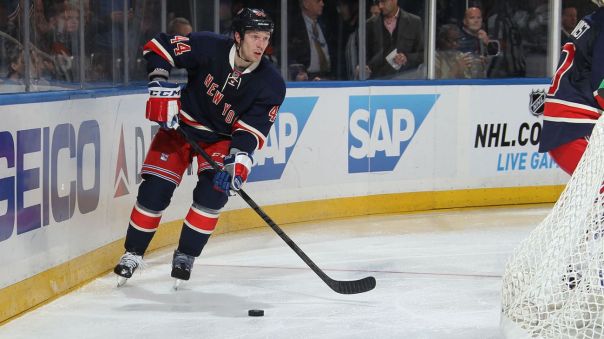 Matt Hunwick may remain as a starter for the Rangers even after the return of Captain Ryan McDonagh. Hunwick has played very well for the Rangers, and can move the puck effectively through the neutral zone. Photo courtesy of MSG Photos.

Hunwick plays strong defensively, and has shown that he knows how to move the puck through the neutral zone, picking up six assists in 19 games. Vigneault has also used him on the power play, and Hunwick has played an important role with all of the injuries to the Rangers defensemen.

Lee Stempniak was skating with Carl Hagelin and Kevin Hayes on the third line, which likely means that the rookie Anthony Duclair would be the odd man out. Duclair has played hard since he was put back in the lineup, picking up an assist in the win over Montreal, and was part of a strong third line over the past three games.

Although I am happy that Stempniak is back in the lineup, especially because of his ability to play on both sides of the puck, I don’t understand scratching Anthony Duclair. Duclair has shown some promise and offensive ability, picking up seven points (1-6-7) in 16 games this season.

The line of Hagelin, Hayes and Duclair has been one of the better lines for the Rangers over the past few games, constantly pressuring opponents.

Again I will point to Tanner Glass. Glass is a minus-nine with only one point in all 21 of the Rangers games this year. Glass is a horrible puck possession player, and gave up the puck for Tampa Bay’s game winning goal last night. Yet every single night, Vigneault sends out Tanner Glass on the fourth line. 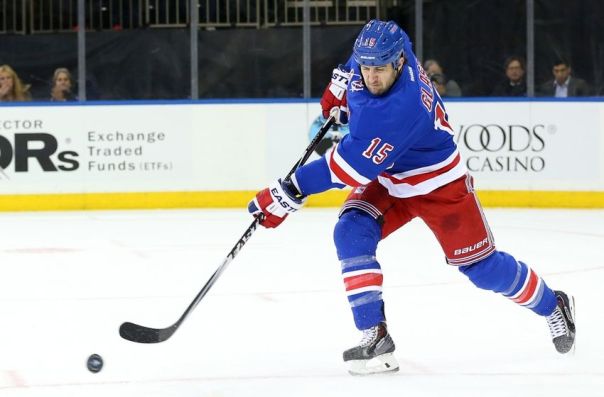 Tanner Glass was in the Rangers lineup during practice today, while Anthony Duclair is believed to be a healthy scratch for tomorrow afternoon’s game. Glass has played in all 21 games for New York, and has one point, an assist, with a minus-nine rating.

Vigneault coached Tanner Glass in Vancouver for two seasons, so he is familiar with his style of play. I am not sure why Vigneault continues to play him, but it’s either because of familiarity or because the Ranger’s don’t want to scratch someone that they are paying $1.5 million a year. Either way, there is no reason that Tanner Glass should be playing over Anthony Duclair or Lee Stempniak.

The Rangers top two lines have been very good so far. Rick Nash scored his 15th goal of the season last night, and now has goals in 13 of the Rangers 21 games this season. Derek Stepan picked up another assist last night, giving him eight points (2-6-8) in his first nine games of the season. And Derick Brassard has solidified his role as the top line center for New York, and has 17 points (6-11-17) in all 21 of the Rangers games. 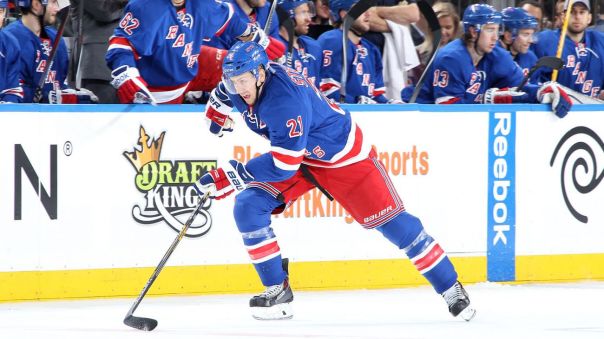 Derek Stepan has been one of the key players since his return, picking up eight points in his first nine games. Stepan ha solidified the Rangers second line, and is a very versatile player in the Rangers lineup. Photo courtesy of MSG Photos.

The Flyers have been struggling recently, winning only one game in their last seven contests (1-5-1). The Flyers have one of the most dominant players in the league in Jakub Voracek, who already has 30 points (8-22-30) in the Flyers first 21 games, which is second in the NHL. The Flyers captain Claude Giroux also has been playing well, with 26 points (7-19-26) to start the season.

The Rangers and Flyers will play at 1 PM tomorrow as part of NBC’s “Thanksgiving Showdown.” It is the first game of a home-and-home series, and the second game will be on Saturday at Madison Square Garden.

← Rangers struck down by Lightning; Dan Boyle scores first goal as a Ranger
UPDATE: Tanner Glass out with the Flu, Ryan McDonagh back in the lineup against Flyers →