← Rangers keep the streak alive against the Caps; Nash scores first hat trick as a Ranger
Rangers roll over Devils for 8th straight; Stepan picks up a hat trick →

Rangers begin second half against Devils, look to continue consistency

Rick Nash and Mats Zuccarello have both been rolling lately, and will look to keep the Rangers streak alive against the New Jersey Devils. Photo courtesy of MSG Photos.

After the league-mandated three day holiday break, the Rangers (18-10-4) will return to action against the rival New Jersey Devils (12-17-7) at Madison Square Garden.

The Devils are in a bit of turmoil, having just fired their head coach Pete DeBoer this afternoon. After having a decent start to the season, the Devils have lost seven of their last eight games, and 13 of their last 16, dating back to November 22nd. New Jersey is nine points out of a playoff spot.

In his three and a half seasons in New Jersey, DeBoer has a record of 114-93-41, and his missed the playoffs in the past three seasons.

There are rumors that the Devils have hired former Ottawa Senators head coach Paul MacLean to replace DeBoer, but it is not confirmed. MacLean was fired this season after starting out the season 11-11-5 with the Senators.

The Devils are also one of the older teams in the league, with 42 year old Jaromir Jagr leading the team in points with 20 (5-15-20),  and veteran center Scott Gomez anchoring the top line. Mike Cammalleri leads the team in goals with 11, but has only played 24 games this season.

Basically, the Devils still haven’t figured this out this season, still searching for answers, scoring, and strong defensive play. With a new coach behind the bench tomorrow, it’s a perfect opportunity for the Rangers to jump on the team and take advantage of the situation.

Fortunately, the Blueshirts are playing their best hockey of the season, and a win on Tuesday over the Capitals gave them seven in a row. Rick Nash scored his first hat trick as a Ranger in the game, and now has 23 goals this season.

The Rangers have also been excellent defensively during the streak, limiting opponents to a total of 10 goals while scoring 23 of their own. With Henrik Lundqvist also playing near the top of his game, and strong contributions from all of their healthy defensemen, the Rangers are a force to be reckoned with on the back end. 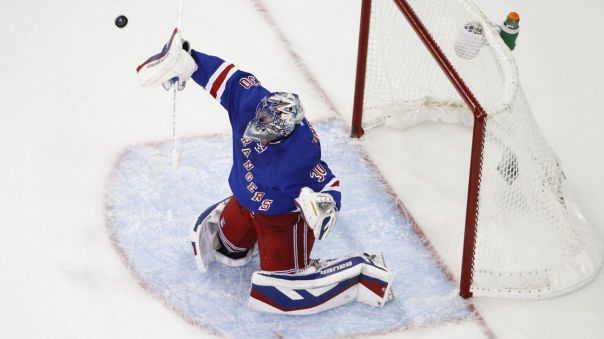 Henrik Lundqvist has won his last six starts, picking up one shutout along the way. Lundqvist appears to be playing at the top of his game, Lunqdvist has not allowed more that two goals since The Rangers overtime win over the Penguins on December 8th. Photo courtesy of MSG Photos.

While Nash leads the team in goals, New York has also been getting scoring from all over the ice. Not only have the defensemen started scoring, with 10 points (6-4-10) in the last seven games, all of the lines have been contributing.

JT Miller has been standing out since he was recalled from Hartford. In his last 10 games, Miller has played center and both wing positions, filling in wherever needed. He also has four goals and an assist during that span. Miller will likely play on the third line with Kevin Hayes and Carl Hagelin.

Mats Zuccarello has also been on the rise during the win streak, after struggling early in the year. Zuccarello has seven points (2-5-7) in his last seven games, and is fourth on the team with 18 points (6-12-18). His two assists against the Capitals extended his modest point streak to three games. 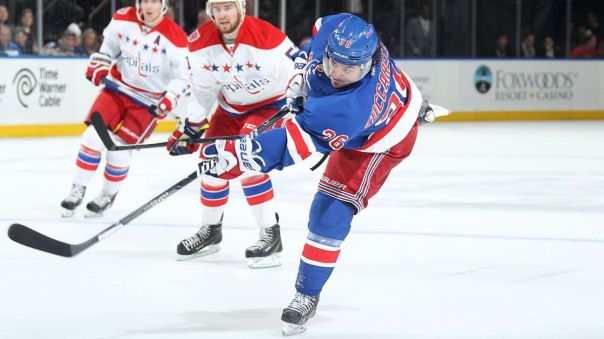 Zuccarello has been hitting his stride lately, with seven points in his last six games. Zuccarello now has 18 points (6-12-18) this season. Photo courtesy of MSG photos.

The last time that the Rangers and Devils played each other was on October 21st, when the Rangers scored three consecutive goal, eventually winning on a Kevin Klein slap shot in over time. Henrik Lundqvist made 31 saves in the victory.

The Rangers and the Devils will face off at Madison Square Garden at 7 PM tomorrow night. The game will be broadcasted on MSG Newtork.

I will be at the game in section 227, row 15, seat number 2, wearing my Derick Brassard jersey. So if you’re at the game, feel free to stop by and say hi!

← Rangers keep the streak alive against the Caps; Nash scores first hat trick as a Ranger
Rangers roll over Devils for 8th straight; Stepan picks up a hat trick →