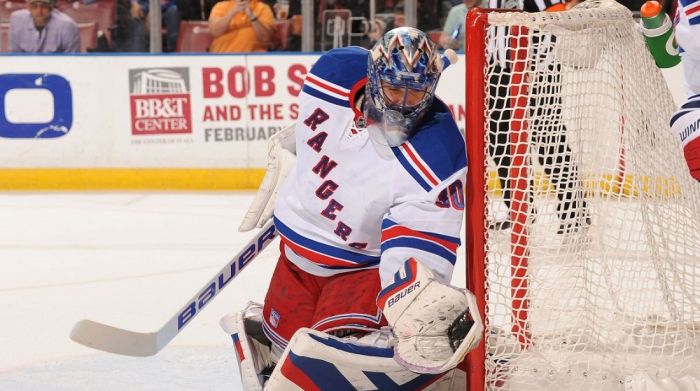 Henrik Lundqvist was in net for the Rangers 5-2 victory over the Florida Panthers, stopping 18 shots for his 17th win of the season. Photo courtesy of the New York Rangers.

The Rangers (20-11-4) closed out the year strong, with a dominating win over the Florida Panthers (16-10-9) on the road, scoring five goals, all from different players.

The Blueshirts overcame a bad first 10 minutes, controlling the final 50 minutes, scoring the first goal of the game and never losing the lead.

Florida was held to just 20 shots in the game, mostly in part to an excellent defensive effort from all of the players. Ryan McDonagh, Marc Staal and Chris Kreider all stood out, playing well in their own end and preventing the Panthers from ever establishing their game.

The first 10 minutes of the game was rough for the Rangers, looking as if they still needed to find their legs. The second half of the game was much better, and they began to generate more scoring chances.

The Rangers opened up the scoring, and it was Chris Kreider finding the back of the net for New York, just his second goal in the past 20 games.

Martin St. Louis circled the puck behind the net, finding Kevin Klein near the blue line. Klein’s slap shot hit the back of Derek Stepan and fell right at the feet of Kreider. His slap shot went over the shoulder of Montoya, and gave the Rangers a one goal lead.

The Rangers continues their pressure early in the second, with Derick Brassard scoring just 1:29 into the period. Ryan McDonagh shot for a rebound on an odd man rush, and Montoya left a big rebound, with Brassard hammering his ninth goal of the season into the open net. 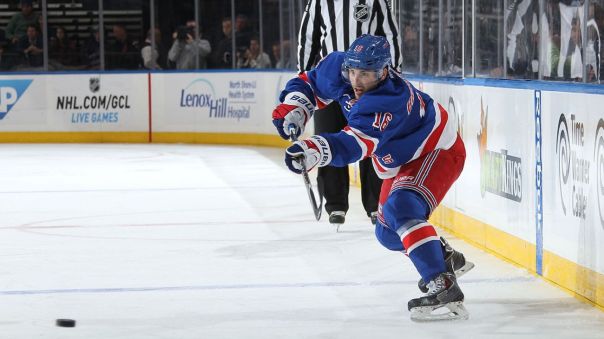 Derick Brassard scored his first goal since November 29th, after Ryan McDonagh made a great play to shoot for a rebound. Brassard is second on the team in points with 28. Photo courtesy of MSG Photos.

With Tanner Glass a healthy scratch, Jesper Fast was back in the lineup, playing on the third line for a while. The line of Carl Hagelin, Kevin Hayes and Jesper Fast was really strong, with a few strong shifts in the second period, with tons of possession in the offensive zone.

On top of playing shut down defense, Ryan McDonagh was contributing to the offensive game as well, joining the rush and setting up his teammates for strong chances.

However, he was the one to score the next Rangers goal, picking up his third goal of the season on a sensational power play goal.

On the man advantage, the Panthers tried to clear the puck out of the zone, but McDonagh knocked it out of midair with his right skate, then fired a slap shot past Montoya, the Rangers third consecutive goal. McDonagh now has 10 points in his last 14 games since returning from a shoulder injury. 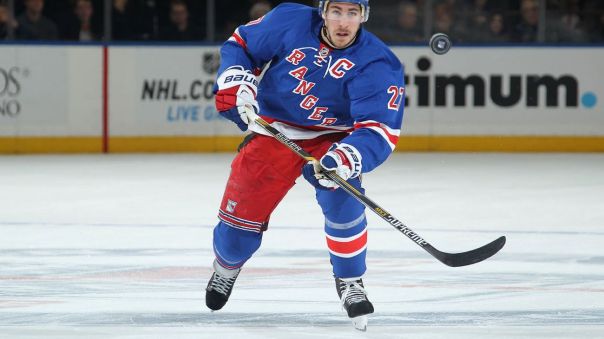 Ryan McDonagh had a tremendous game, picking up a goal and an assist as well as playing a strong defensive game, like he always does. McDonagh is getting back into his old form, and seems totally healthy following his injury. Photo courtesy of MSG Photos.

The Rangers power play continues to stay hot, and they have now scored in four consecutive games, as well as in six of their last seven games. The Blueshirts have an 11-4-2 record in games where they have scored on the power play.

The Panthers managed to score a late goal, following a missed Rangers opportunity. St. Louis couldn’t connect on a chance in front, and Johnathan Huberdeau sent a perfect outlet pass to Thomas Fleischmann, who was able to fight off Kevin Klein and fire a shot past Lundqvist, making the score 3-1 late in the third.

Florida continued to attempt a comeback in the third, converting on a power play opportunity after Marc Staal was sent off for high sticking, which was sold by the Panthers Vinny Trocheck. On the man advantage, Jimmy Hayes was able to hammer in a loose puck, cutting the Rangers lead to just one goal. Jimmy Hayes, the brother of Rangers center Kevin Hayes, scored his 11th goal of the season, tying his career high in goals.

However, the Rangers were able to overcome the adversity, scoring just over two minutes later. The Rangers were cycling the puck behind the net, and Chris Kreider found Derek Stepan for a one timer in front. Montoya made a good save, but Martin St. Louis was able slide the puck between the legs of Al Montoya, giving the Rangers their two goal lead back, and St. Louis’ 12th goal of the season.

Dominic Moore would seal the victory for the Blueshirts, scoring his second goal of the season late in the third period. Martin St. Louis made a nice defensive play in the neutral zone and had a breakaway chance. Montoya made a great save to stop the initial shot, but Dominic Moore’s followed up the shot for a fantastic second effort goal. 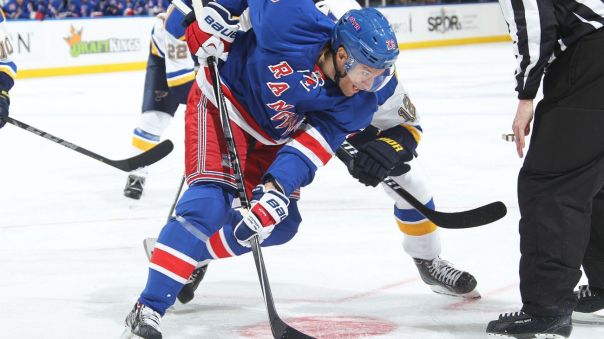 Dominic Moore sealed the Rangers win with a great followup goal after Martin St. Louis’ shot was blocked. Moore is a huge part of the Rangers penalty kill and defensive play, so its always good to see him score a goal. Photo courtesy of MSG Photos.

Overall, it was a very dominating win for the Rangers. They came out of a bad first 10 minute stretch unscathed, and pretty much controlled the game the rest of the way.

Chris Kreider had one of his best games in a long time. Kreider was extremely active in all three zones, scoring his sixth goal of the season as well as protecting the puck in the Rangers zone. Since scoring against Calgary, Kreider has been a much better, more confident player, and that showed tonight. 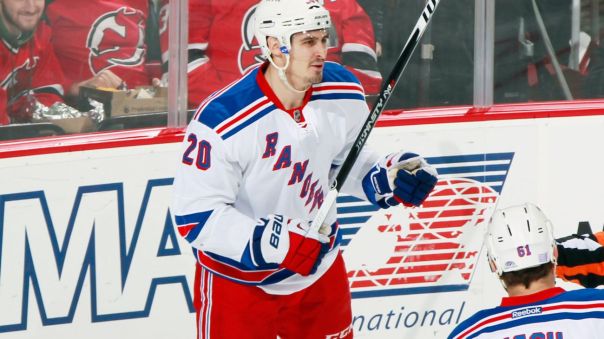 Chris Kreider had one of his best games in recent memory, opening the Rangers scoring and playing a very solid, all around effort. Kreider has been much better since scoring against Calgary on December 16th. Photo courtesy of Getty Images.

Ryan McDonagh also had a spectacular game, and continues to improve since returning from a separated shoulder he suffered in early November. The captain has been very strong defensively, but is consistently joining the rush and creating offense for the Rangers. The Blueshirts are a much better team when he is playing well and contributing offensively. McDonagh now has 13 points (3-10-13) this season, which is the most amongst Rangers defensemen.

Derek Stepan also continues to play, picking up two assists today, and totaling 25 points (6-19-25) this season. Stepan has a total of 11 points (4-7-11) over the last seven games. Stepan is also tied for first in the NHL in assists since his season debut on November 8th, with 19.

Kevin Klein picked up an assist on Chris Kreider’s goal, giving him a total of 12 points (7-5-12) this season. That assist gave Klein 100 career points in the NHL.

The Rangers will begin 2015 against the Buffalo Sabres on Saturday at Madison Square Garden, their only home game before they head out on a three game trip in California.