Rangers look to keep winning ways against the Sabres at home 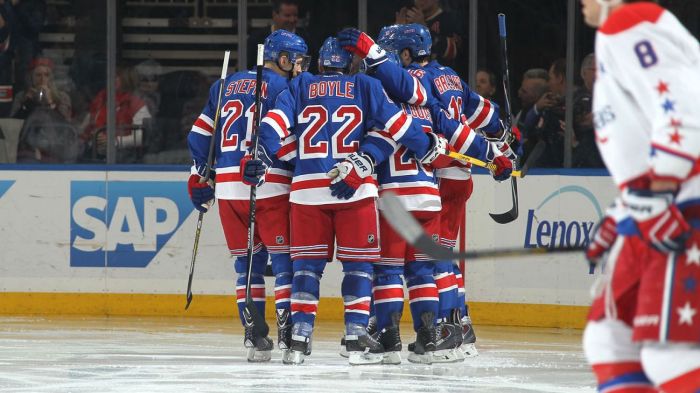 The Rangers will be back at Madison Square Garden to take on the Buffalo Sabres, who have struggled recently. Photo courtesy of MSG Photos.

The Rangers (20-11-4) have won nine of their last 10 games, and are hoping to continue to pick up another win against the struggling Buffalo Sabres (14-22-3) at Madison Square Garden.

The Sabres will be playing their second game in as many days, and were shut out by the Florida Panthers 2-0 on Friday night. The Sabres are now 1-6-1 in their last eight games.

While this is largely a rebuild year for the Sabres, they had been playing solid hockey for a while before hitting their recent eight game skid. Buffalo has also had some standout young players.

Tyler Ennis is the young star center on the team, leading the Sabres with 24 points (9-15-24), and always posing a threat when on the ice. Zemgus Girgensons is also impressing in his second season in the NHL, already putting up 20 points (11-9-20) to start the year.

Jonas Enroth will be in net for the Sabres on Saturday, but has struggled to start the year. Enroth has an 11-13-2 record to go along with a 3.16 GAA and a .908 save percentage. Enroth hasn’t got much help defensively either, and this is a combination that the Rangers need to take advantage of.

The Rangers are coming off of a Dominating 5-2 victory over the Florida Panthers on New Year’s Eve. In the game, the Rangers had five different goal scorers, with Kreider, Brassard, McDonagh, St. Louis, and Dominic Moore all scoring for New York. 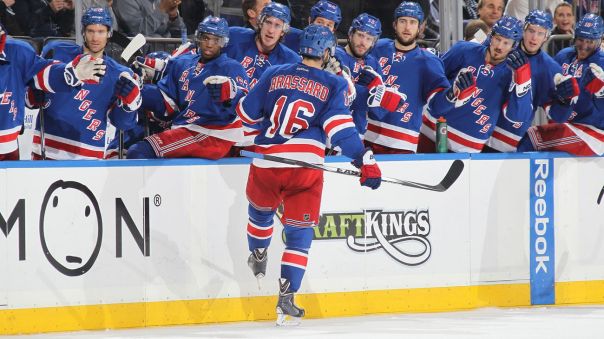 Derick Brassard was one of the Rangers goal scorers on Wednesday, scoring his ninth goal of the season. Photo courtesy of MSG Photos.

Alain Vigneault also made the decision to scratch Tanner Glass, which seemed to work for the Rangers. The fourth line was much more active in the offensive game, and Jesper Fast was promoted to the third line, where he played well with Carl Hagelin and Kevin Hayes.

In the game, Derek Stepan picked up two assists, and continues to consistently provide a spark to the Rangers team. Stepan has 25 points (6-19-25) since returning just 23 games ago, and has 11 points in his last seven games. Stepan is red-hot, and is certainly a candidate to pick up a few points against Enroth and Buffalo.

For the past few games, the Rangers third line, consisting of Carl Hagelin, Kevin Hayes, and the rotating right wing position, has been very effective. Hagelin and Hayes continue to develop chemistry, Hayes continues to grow with every game he plays, and both JT Miller and recently, Jesper Fast, have fit in nicely on this line. In a lower pressure game against a struggling Sabres team, I expect this line to have a good night. 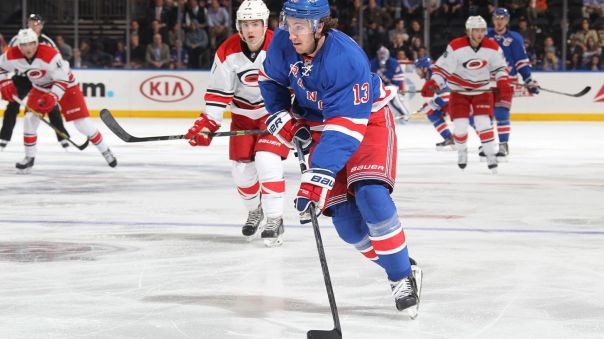 Kevin Hayes has centered the Rangers third line for most of the season, and has q3 points in his rookie season. Hayes continues to get better with every game that he plays. Photo courtesy of MSG Photos.

The Rangers have also been getting contributions from all of their defensemen lately, most notably Ryan McDonagh and Dan Boyle.

Dan Boyle has five points in just 19 games this season, with most of them coming on the power play. Even when he isn’t picking up points, Boyle moves the puck extremely well and always pressures the opponents.

Ryan McDonagh has been phenomenal lately, putting up big numbers while providing shutdown defense on the top defensive pairing. McDonagh truly appears healthy, and has gotten his offensive touch beck, clearly evident from his sensational power play goal against the Florida Panthers.

The Rangers and the Sabres will face off at 7 PM on Saturday at Madison Square Garden. The game will be broadcasted on MSG Network.