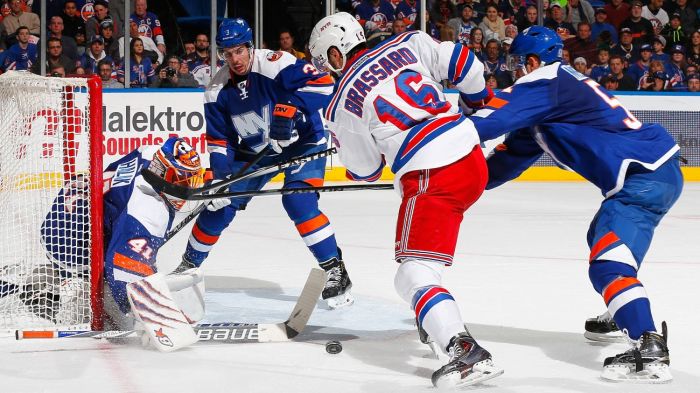 The Rangers dropped another game to the Islanders, falling by a final score of 4-1. It was just the fourth loss in the last 20 games for the Rangers. Photo courtesy of Getty Images.

The week off for the Rangers seemed to have a lingering effect, as the Rangers (27-14-4) seemed distracted and off their games at times, falling to the Metropolitan Division leading New York Islanders (32-14-1) by a score of 4-1, and ending their three game win streak.

It was the first game at Nassau Coliseum for the two teams, but the result did not change. The Rangers have been outscored by the Islanders 13-4 in the three games, and now trail them by seven points with two games in hand. The Islanders also improved their home record to an impressive 17-4.

It was an extremely physical game, with a combined 81 hits between the two teams, and a total of 79 shots on goal. However, the Islanders came away with the win, finding a way to expose and exploit the Rangers flaws for the third time this season.

Henrik Lundqvist was in net for Rangers, and had a very strong game despite giving up four goals on 38 shots. He had virtually no chance on the first three goals, with one of them bouncing off of the stick of McDonagh and past him. It was just Lundqvist’s third loss in his last 17 starts.

Halak was fantastic in net for the Islanders, stopping the first 40 shots he faced before giving up a power play goal with less than 10 seconds remaining in the game. Halak made some very strong saves,was always positioned well, and was constantly focused on the puck, picking up his 26th win of the season.

The physicality showed especially in the first period, with 16 hits apiece for the Rangers and Islanders, and players from both teams making sure to finish their checks. One thing that was very notable were the Rangers turnovers, leading to numerous breakaway chances and odd man rushes for the Islanders, which were stopped by Lundqvist in the period. 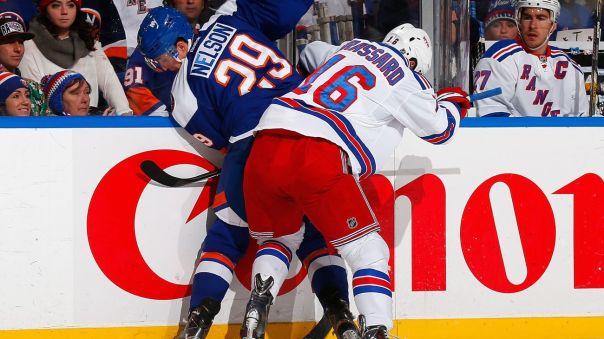 The Islanders would cash in on a takeaway, with Mikhail Grabovski scoring in his first game back in the lineup. The Isles had a great tic-tac-toe passing play, eventually ending up on Grabovski’s stick for an easy tap in, and his seventh goal of the season. The assists went to Josh Bailey and Johnny Boychuck.

In the second period, the Isles found the back of the net again, with Matt Martin scoring his seventh goal of the season. Martin set up the play behind the net, finding Casey Cizikas for a wrist shot. Lundqvist made the save, but Cal Clutterbuck slid the rebound to Martin for another tap in, and another poorly defended effort from the Rangers. The Isles suddenly had a two goal lead.

Despite getting 18 shots on net, the Rangers were stymied by Halak. They also managed to seem passive despite all of the shots, passing the puck around and passing up on open shots, as well as on the power play.

It was the same story in the third, carrying over their same struggles into the final 20 minutes. Their shots were getting blocked, they were turning the puck over, and could not score.

The Islanders scored their third consecutive goal thanks to a lucky bounce. The Isles lifted the puck out of their own zone, and Ryan McDonagh could not handle the bouncing puck. Ryan Strome went to pass the puck, but it deflected off of McDonagh’s stick and into the net.

The fourth goal came on a five-on-three power play, with John Tavares faking a pass and firing a shot through the pads of Lundqvist for his 22nd goal of the season.

Jaroslav Halak’s shutout was spoiled with less than 10 seconds remaining in the game, and it was Carl Hagelin scoring his 10th goal of the season. Dominic Moore did a great job of carrying the puck into the Islanders zone, before Jesper Fast was able to backhand it over to Hagelin, who found a small space to end the Islanders shutout streak against the Rangers at 122:01.

Carl Hagelin scored the lone goal for the Rangers, picking up his 10th goal of the season. Hagelin now has goals in two straight games. Photo courtesy of MSG Photos.

It was nice to see Carl Hagelin score, as the winger is searching for consistency. He now has goals in two straight games, and was noticeable on the ice tonight.

In the end, it was another disappointing loss against the Islanders. While it was certainly a better effort than their last meeting, the Rangers made too many mistakes, and the Isles capitalized on all of them. I’m not sure why, but it seems like the Rangers play like a different team against the Islanders, making a lot of mistakes and dropping three straight.

The first period was marred with turnovers, which led to numerous chances and forced Henrik to make some great saves. The Rangers also struggled to control the puck at the blue line, often letting pucks slip past them, spoiling chances and creating chances for the opponents.

The Rangers defense did not have a strong game, apart from Kevin Klein and Marc Staal, who turned in strong performances. The top pairing of Ryan McDonagh and Dan Girardi were beaten on plays on numerous occasions, blowing defensive coverages that led to goals. Dan Boyle also played poorly, and did not generate many chances on the power play, as well as missing defensive coverages throughout the game.

The defense really needs to shape up. McDonagh and Girardi have not matched their output from last season, and Dan Boyle has been lackluster to say the least. With so much money tied up in the back end, the Rangers need to see a better performance from their top defensemen. 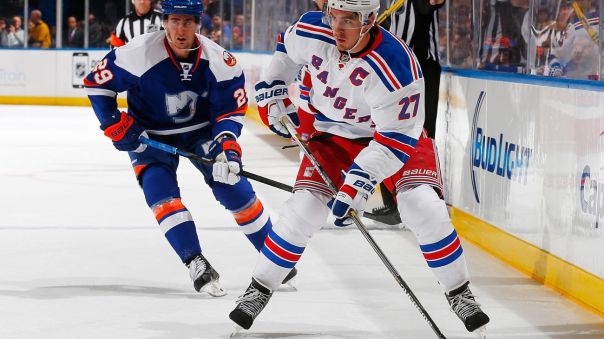 Ryan McDonagh and the rest of the Rangers defense need to improve their overall play in order to help the Rangers match up against other top teams better, which includes more offensive production. Photo courtesy of Getty Images.

The Rangers need to sharpen up, stop making a ton of mistakes, and play better against the Islanders if they want to climb in the standings. There are two games remaining against the Isles, both at Nassau Coliseum.

The Rangers will look to bounce back against the Montreal Canadiens at home on Thursday. The Rangers beat the Canadiens 5-0 at the Garden back on November 23rd.