← Rangers rematch Predators at the Garden with their newest acquisitions
Signing Mats Zuccarello, at the right price, was the right move for the Rangers →

The Rangers took down the top team in the NHL, dominating most facets of the game in a 4-1 victory. Photo courtesy of MSG Photos.

In the Rangers (39-17-6) first game since acquiring Keith Yandle and re-signing Mats Zuccarello to a four year deal, the re-energized Rangers shut down the best team in the NHL, handing the Nashville Predators (41-16-7) their third straight loss by a final score of 4-1.

With the win, the Rangers leap-frogged the Islanders for first place in the Metropolitan Division, tied with 82 points, but the Rangers have two games in hand. New York is 9-1-1 in their last 11 games, 21-5-5 at home since October 16th, and 28-7-2 since December 8th.

This was one of the most impressive showings of the season, with New York really muffling the Predators scoring ability, keeping the puck to the outside, and really controlling play for almost the entire game. It especially showed when the Predators pulled Rinne at the 16:00 mark of the final period, and barely got any shots on goal. The defensive effort was outstanding.

Newest Ranger Keith Yandle made his Rangers debut, and had a strong showing. He admitted that he felt “butterflies,” but put those aside for the most part. He logged 19:41 minutes of ice-time, and held his own defensively, moving the puck well to get it out of the Rangers zone. I was really impressed with how he drove possession, setting up guys for shot opportunities. A promising debut for Yandle.

Keith Yandle had a strong showing, driving a lot of possession and scoring chances and holding his own defensively. Photo courtesy of MSG Photos.

Ryan McDonagh commented on how easy he fit into the group, and was talkative and willing to learn from the other defenseman. Yandle said everyone made him feel at home, and he was happy to have warmups to ease him into it. He remarked that you can’t find a weak flaw in the lineup, and enjoyed “just looking up and having an awesome guy to pass to, it was just so much fun.”

Cam Talbot was in net for the Rangers, and boy did he have a strong showing. It wasn’t necessarily that he made a ton of flashy saves, but he was really solid, controlling rebounds, stopping practically everything, and minimalizing the chances for the Preds. His best save came in the second period, kicking out the left pad and robbing Filip Forsberg in the second period.

Cam Talbot was extremely sharp against the Predators, making 25 saves for his 13th win of the season Photo courtesy of MSG Photos.

Mats Zuccarello struggled on Saturday against the Flyers amidst the trade rumors. He agreed to a four year extension yesterday, and all of the nerves were shaken off. Zuccarello and the Rangers were reenergized knowing one of everyone’s favorite players would still be around. “Zukes” finished with two assists, including the primary assist on the game winner. He has 37 points, with five goals and nine assists in his last 16 games.

The first period was outstanding, one of the best the team has had this whole season. JT Miller was causing problems early, and the second line had some strong shifts as well. The pressure turned into an early goal, and it was Marc Staal scoring his fifth goal of the season.

Craig Smith whiffed on a shot, and Dan Boyle alertly gathered the puck and started a rush. Brassard brought it down low, and passed it through traffic, where Zuccarello tapped it back to Staal. His slap shot beat Rinne up high, giving the Rangers a 1-0 lead. 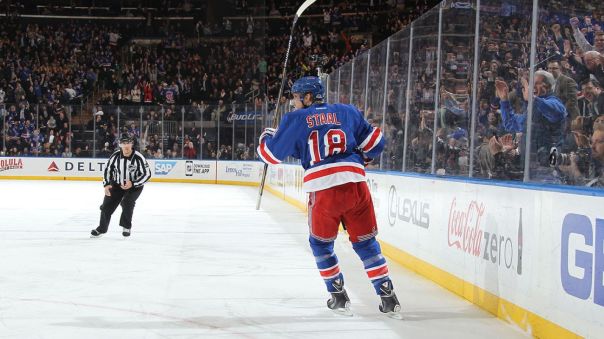 Marc Staal fired a slap shot top shelf to put the Rangers on the board first. Photo courtesy of MSG Photos.

The Rangers defense was amazing this period, limiting Nashville to just two shots in the first 10 minutes, and only one shot on goal from the highest scoring defense in the NHL. Marc Staal and Dan Boyle particularly stood out, making a lot of great plays. I thought the Kevin Klein-Keith Yandle paring worked well, and would like to see that pairing going forward. Miller and St. Louis also had a strong period.

The second period was equally as strong, and the Rangers broke through again with an early goal. Brassard was battling for the puck along the boards, and got it to Mats Zuccarello. Zukes saw Kreider streaking towards the net, having just come off the bench, and sent a tape-to-tape pass for Kreider to chip in past Rinne, giving the Rangers a 2-0 lead.

The goal was Chris Krieder’s 17th of the season, matching his total from last year, a career high. Brassard’s second assist of the game gives him 50 points this season, the first time he has reached that total in his career. 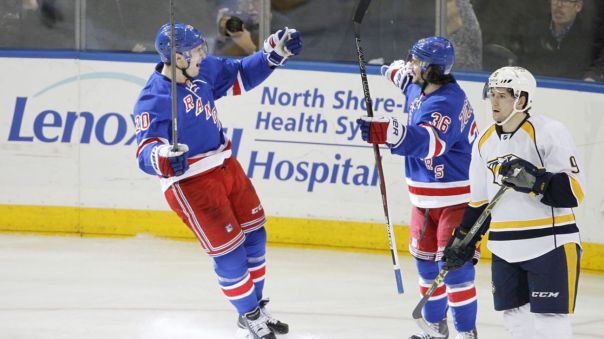 The Predators started to come alive with about six or seven minutes to go, and would wind up getting one of the goals back. Jesper Fast, returning to the lineup, turned the puck over at the boards, giving the Predators an opportunity. Taylor Beck got the puck near Talbot, and made a fantastic backhanded pass from his knees, giving Matt Cullen a wide open net, and his 7th goal of the season. Yandle was the defenseman near the net, but he had absolutely no chance at breaking this play up.

That was really one of the few quality chances they would have, and the Rangers would shut them down in the final period.

Dominic Moore would add to the Rangers lead just about six minutes into the period. Tanner Glass made a nice pass to Dan Girardi off of the boards, and he one timed a low shot at Rinne. He couldn’t control it, and Moore was there to do the dirty work, sliding it past Rinne for his sixth goal of the season. With the assist, Tanner Glass now has a two game assist streak, and has three points this season, all assists.

Dominic Moore gets hi-fives from his teammates after scoring his sixth goal of the season. Photo courtesy of MSG Photos.

With about four minutes remaining, Peter Laviolette pulled Rinne to give Nashville an extra skater. The Rangers kept almost all of their chances to the outside. Rick Nash would score an empty netter, his 38th of the season, and his first goal in three games.

The Rangers outshot the Predators 40-26. They dominated most of the game, and the defense in this game was really, really good from everyone. Marc Staal had a whale of a game, blasting a nice goal and playing fantastic defensively. I also thought Dan Boyle bounced back nicely and had a spectacular game, making a ton of smart plays and good reads. Probably the best defensive effort from the team this season.

Chris Krieder has three goals in the last three games, and tied his career high in goals with 17, set last season. Kreider is developing into an elite scorer right before our eyes, and continues to play at a very high level. This was the year I wanted to see Kreider eclipse 20 goals, and he has a great shot at doing that this season.

There were a lot of rumors going around trade deadline day involving Mats Zuccarello. But he took less money than he probably could have gotten in order to remain in New York, the team and city that he loves and has flourished in. The extension clearly put him at ease, and he played really well tonight, picking up two assists. Following the game, Zuccarello had this to say.

Derick Brassard and Mats Zuccarello will remain teammates, and close friends, for the next four years. Photo courtesy of MSG Photos.

“I’m really happy to stay here with my friends. It feels like we are a family here. This is where I want to be.” He concluded by saying, “We got the two points, and I get to stay for four more years – this day can’t get much better.”

The Rangers will embark on a five game road trip starting Wednesday, where they will take on a very strong Detroit Red Wings team at the Joe Louis Arena.

← Rangers rematch Predators at the Garden with their newest acquisitions
Signing Mats Zuccarello, at the right price, was the right move for the Rangers →