Rangers rematch Predators at the Garden with their newest acquisitions

The Rangers are back at the Garden, looking to take down the Nashville Predators before heading out on a tough road trip. Photo courtesy of MSG Photos.

Following a hectic trade deadline, the Rangers (38-17-6) are back at Madison Square Garden for one game, where they will take on the Nashville Predators (41-15-7), currently the best team in the NHL when it comes to points.

Both teams have re-tooled their lineup since the last time that they met, a 3-2 Nashville win on February 7th. In that game, Rick Nash (PP Goal) and Ryan McDonagh found the back of the net, and Derick Brassard assisted on both goals. Nashville got goals from Shea Weber, Roman Josi, and Mike Ribeiro, as well as 30 saves from Pekka Rinne.

Rinne has been one of the best goalies in the league this season, and he has some impressive numbers to back that up. Rinne has 35 wins, a 2.07 GAA, and a .928 save percentage, second to Montreal’s Carey Price in all of those categories. The Rangers will need to work hard to get pucks past Rinne.

Predators boast a deep forward group, bolstered by the offseason acquisition of Mike Ribeiro, who continues to prove Nashville’s decision right, putting up 52 points (12-40-52) in 63 games this season. Filip Forsberg practically has the Calder Trophy locked up, scoring 21 goals and 31 assists in his rookie season.

The Predators defensive group is the highest scoring unit in the NHL, led by captain Shea Weber (15-28-43) and his cannon of a slap shot, and backed up by Roman Josi (11-35-46) and Seth Jones (6-16-22). Nashville knows how to drive possession and scoring chances from the blue line, something that makes them a very dangerous team.

The Rangers went out and acquired a defenseman that they hope will be able to do the same thing. Keith Yandle, who will wear number 93, was the Rangers biggest trade deadline acquisition. Yandle is an offensive juggernaut, totaling 41 points (4-37-41) this season, and he is a great puck mover, and is not afraid to fire the puck on net.

Yandle’s style of play just screams Alain Vigneault, as he is a competent skater and puck mover, exactly what the Rangers need. And assuming the Rangers get a power play opportunity, Yandle will be out there. He has two goals and 24 assists on the man advantage. With all of this in mind, Yandle is my player to watch tonight.

Watching Keith Yandle tonight should be fun. His style of play fits into Vigneault’s system, and he should help the power play as well as driving more possession. Photo courtesy of the Arizona Coyotes.

JT Miller had one of his best games of the season in Philadelphia, scoring the Rangers first goal and seeing increased ice time in late game situations. Miller has fit nicely into the Rangers third line, and has the talent to be a productive member of the Rangers bottom six forwards. He has a point in four of the last nine games (1-3-4), and has posted a plus/minus rating of even or better in six consecutive games. It finally seems that he has cracked the Rangers NHL roster as a full time member.

James Sheppard, picked up from San Jose last night, is expected to be available for tonight’s game. Sheppard is listed as a center, but may be better suited for the wing position. There is a chance he could take Tanner Glass’ spot on the fourth line wing position. He will wear number 45.

Jesper Fast has been practicing in a contact jersey lately, so I wouldn’t be surprised if he is available to return to action against Nashville.

Cam Talbot will be back in net for the Rangers, coming off of a strong 30 save performance in a loss against the Flyers. Talbot looked sharp, and will need to bring his A-game again tonight. 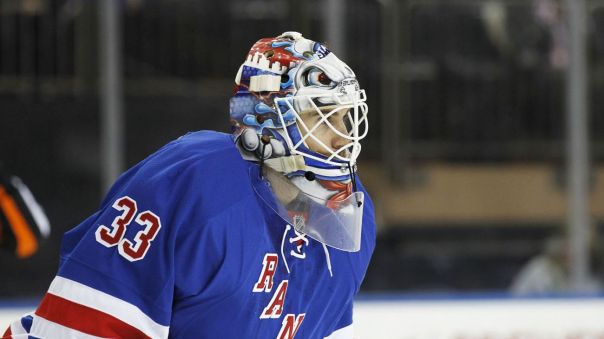 Cam Talbot is back in net for the Rangers, looking to build off of his strong showing against the Flyers on Saturday. Photo courtesy of MSG Photos.

The Rangers have struggled to put together a complete 60 minute effort lately, and can’t afford to have major mental lapses against a team like Nashville. Now that Zuccarello has been re-signed, they bolstered their defense with Keith Yandle, and trade deadline day is practically over, the Rangers may have some confidence going into tonight’s game.

The Rangers and the Predators will face off at Madison Square Garden at 7 PM. The game will be broadcasted on MSG Network.