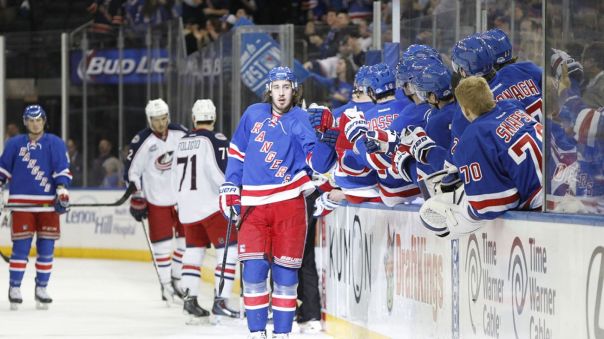 The Rangers will turn to Kevin Hayes on the second line to pick up the scoring slack in the absence of Martin St. Louis as the team goes for its sixth straight win. Photo courtesy of MSG Photos.

After two days off, the Rangers (44-17-7) are hoping to extend their win streak to six games when they take on the Chicago Blackhawks (42-21-6) for the second time in less than two weeks, with both teams playing quite well as of late.

New York and Chicago last faced off on December 8th in a game that went into overtime scoreless. Derick Brassard scored the game winner on a short-side slap shot, which also happened to be the last goal that he scored. Cam Talbot stopped 29 shots for the shutout.

Chicago did play last night, handing the Islanders their fourth straight loss and coming away with a 4-1 victory. Jonathan Toews and Marian Hossa each scored twice, and Corey Crawford stopped 38 shots.

Crawford is having a pretty solid season, posting a 29-14-5 record with a 2.18 GAA and a .926 save percentage. He is 6-0-1 in his last seven starts, and has not given up more than two goals in that span, and even that only happened twice. He’s at the top of his game right now, and with the Nashville Predators struggling now, Crawford could be back in net in an attempt to gain ground in the standings.

The Blackhawks have played well since the loss of their star, Patrick Kane. Since losing him, Chicago is 6-1-1, and is starting to get secondary scoring from guys like Brad Richards and Patrick Sharp, who both snapped their goal droughts recently.

Jonathan Toews is clearly the go-to guy for Chicago now. Toews has three points (2-1-3) in the last two games, and already has 59 points (23-36-59) this season. Toews is rolling in the past 10 games, scoring seven goals and adding three assists in that span.

Brandon Saad is having the best season of his young career, eclipsing the 20 goal mark for the first time in his career, and sitting just two points shy of his career high in points. With 21 goals and 24 assists, Saad is the definition of secondary scoring, and is developing into a really consistent, quality scorer.

The Rangers have won five games in a row, as well as earning points in seven consecutive games (6-0-1). The Rangers are averaging just 2.14 goals per game, but they’ve allowed an astounding .86 goals per game over that stretch, with Talbot and Skapski both picking up a shutout. 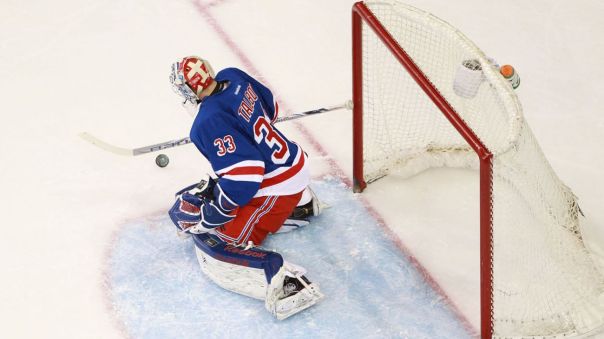 Cam Talbot has been stellar as of late, and hasn’t allowed more than one goal in regulation during the entire month of March. Photo courtesy of MSG Photos.

Cam Talbot will start for the Rangers again, hoping to continue his fantastic stretch of games. He is 5-0-1 in his last six games with a .99 GAA and a .967 save percentage, pretty incredible stats during this stretch. The Rangers have not given up more than one goal in regulation this entire month, with the Red Wings scoring the most goals against the Rangers in the month of March, scoring two goals, with the game winner coming in overtime.

With St. Louis out, head coach Alain Vigneault was forced to juggle the lines ahead of tonight’s games. Kevin Hayes will play on the second line alongside Derick Brassard and Mats Zuccarello. Since Brassard and Zuccarello are both pass-first players, Hayes will need to focus more on shooting the puck and getting to the front of the net. Hayes has three points (1-2-3) in his last four games, and needs to continue to provide secondary scoring in the absence of Martin St. Louis.

Rick Nash is currently in his first slump of the season, pointless in his last three games. Nash has just two goals in his last 10 games, with one of those goals being an empty netter. The Rangers are winning because of their tremendous defense and goaltending, but getting Nash going again before the playoffs would be very helpful. 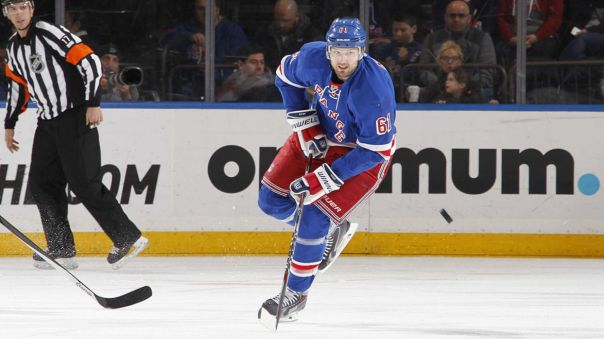 New York could really use some offense from Rick Nash against a very strong Chicago team. Nash has just two goals in the last 10 games. Photo courtesy of MSG Photos.

Nash will be skating on a line with Derek Stepan and Chris Kreider. Kreider’s speed and size will open up the ice for Nash. Stepan can be a really good passer, and he is in a funk himself, going without a point in 10 consecutive contests. Hopefully Stepan and Nash both get out of the rut with the new line combination, and start to consistently put points on the board again.

Vigneault was also forced to change up the power play units in the absence of St. Louis, and also because the Rangers power play has been abysmal lately. In the last five games, New York is 0-14 on the man advantage, and they have scored just one goal on 21 opportunities in the last eight games. Guys like Keith Yandle and Dan Boyle need to step up and turn the power play, ranked 19th in the NHL, back into a weapon.

The Rangers and the Blackhawks face off tonight at 8 PM at Madison Square Garden. The game will be broadcasted on NBCSN.