← Alain Vigneault deserves to win the Coach of the Year award
Rangers comeback for OT win over Blue Jackets; Stepan with a three point night →

The Rangers and Blue Jackets will face off for the final time this season, with New York aiming for their third straight win against Columbus this season. Photo courtesy of Getty Images.

The Rangers (50-21-7) will finish out their two game homestand, and start back-to-back games tonight when they take on the hottest team in the NHL, and winners of nine straight games in the Columbus Blue Jackets (39-35-4).

Although they have been long eliminated from playoff contention, the Blue Jackets carry their franchise record nine game win streak into Madison Square Garden tonight, including a franchise record eight game road win streak. There was a lot of hope heading into this season for Columbus, but a ridiculous amount of injuries derailed their hopes from the start.

Nonetheless, what matters is right now, and Columbus is currently the hottest team in the NHL.

These two teams are meeting for the fourth and final time this season, with New York looking to win their third straight game against Columbus this season. The Blue Jackets won 5-2 in the second game of the season in Columbus, but the Rangers won 2-1 on January 16th and 4-3 in the shootout on February 22nd. Cam Talbot started two of the games, splitting the decisions, while Henrik Lundqvist started the game on January 16th, stopping 35 of the 36 shots he faced. Marc Staal and Chris Kreider scored the two goals in the January game, while Martin St. Louis scored twice in regulation and once in the shootout in the win in February.

Columbus is coming off of a big 5-3 win over the Penguins as they continue to play their best hockey of the season. Sergei Bobrovsky was in net that game, finishing with 33 saves for his 28th win of the season. Bobrovsky will likely get the call again tonight against the Rangers. He is 28-17-2 with a 2.73 GAA and a .916 save percentage.

Scott Hartnell has found a home in Columbus after joining the Blue Jackets this offseason when he was acquired in a trade from the Flyers in the offseason. He has come alive in the second half of the season, currently sitting in third on the team in scoring with 56 points (26-30-56). Hartnell has two points (1-1-2) in the last two games.

Former Rangers Artem Anisimov and Brandon Dubinsky will both be in the lineup tonight, finishing out rough seasons for both of them. Anisimov and Dubinsky have both been bitten by the injury bug, with neither player eclipsing the 50 game mark this season. When healthy, they are still solid players, with Dubinsky sitting at 31 points (11-20-31) and Anisimov with 24 points (6-18-24). 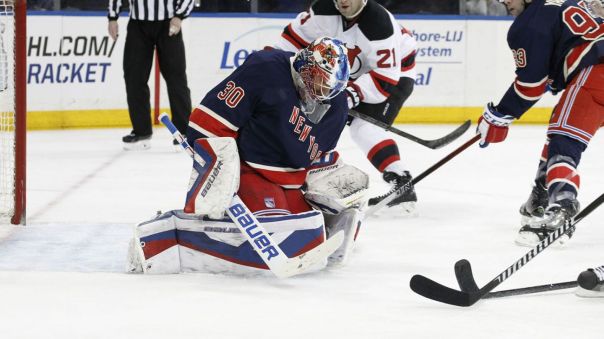 Henrik Lundqvist has been spectacular during the last three games, allowing two goals or less in all of those games, and picking up three wins. Photo courtesy of MSG Photos.

Rick Nash and Derick Brassard will both be in tonight’s lineup, the two leading scorers on this year’s Rangers team. Nash has set a career high in goals with 42, and Brassard has blown past his career high in points, with 59 (18-41-59). Nash spent his first nine season in Columbus, and Brassard spent parts of six season with the Blue Jackets.

Brassard is in the midst of a four game point streak (3-2-5), scoring his 18th goal of the season in the blowout win over the Devils on Saturday. His next goal would be a big moment in his career. One more goal would be his 100th career NHL goal, as well as setting a new career high for a season with 19. Brassard has been a tremendous player for the Rangers, and is heating up as the Rangers march to the postseason.

Keith Yandle is coming off of one of his best games as a member of the Rangers, picking up the game winning goal on Saturday, and adding an assist, giving him a total of 50 points (6-44-50) for the season. Yandle has eight points (1-7-8) in his last eight games, and is starting to understand and fit into Vigneault’s system. While adding solid defensive play, Yandle is becoming one of the more versatile defenseman on the team, and still has more to add to the team.

Keith Yandle has been a solid addition to the Rangers lineup, contributing eight points in the last eight games, and providing steady defensive play. Photo courtesy of MSG Photos.

Kevin Klein was doing some light stickhandling this morning before the morning skate, indicating that he is close to returning to the lineup. Klein could potentially return as early as Thursday pending a doctor’s analysis.

The Rangers and the Blue Jackets will face off at Madison Square Garden at 7 PM. The game will be broadcasted on MSG Network.

← Alain Vigneault deserves to win the Coach of the Year award
Rangers comeback for OT win over Blue Jackets; Stepan with a three point night →