Alain Vigneault deserves to win the Coach of the Year award 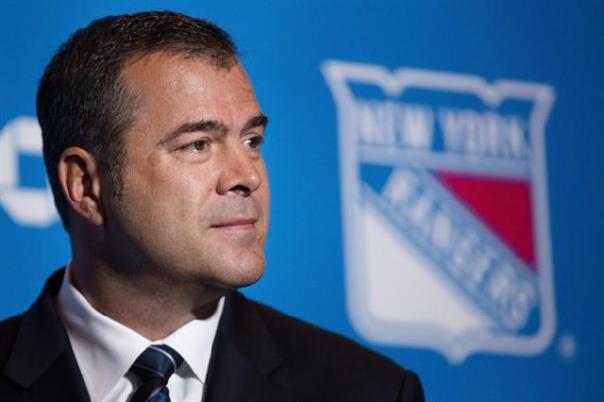 Alain Vigneault has done a tremendous job as head coach of the Rangers this season, overcoming tons of obstacles to pilot the Rangers to a potential 50+ win season. Photo courtesy of John Minchillo/Canadian Press.

For most of the season, the Rangers have been overlooked as one of the elite teams in the NHL. Despite having one of the best records, including that impressive three month streak of success, they were overlooked, with teams like the Montreal Canadiens, Tampa Bay Lightning, Anaheim Ducks, and even the Los Angeles Kings ranked amongst the strongest teams in the league.

With that in mind, Alain Vigneault has also been overlooked for the Jack Adams award, given to the best coach for that season. With everything that Vigneault has done for the Rangers, he deserves to take home the award come season’s end.

Vigneault’s biggest disadvantage is the fact that the Coach of the Year award generally goes to the team with the biggest turnaround. The Rangers came into the season expecting to return to the playoffs, and have a solid season. When you look at the current frontrunners, they are coaching teams like the Nashville Predators, Calgary Flames, and the Vancouver Canucks.

While you can surely make a case for Peter Laviolette down in Nashville, Bob Hartley in Calgary, Willie Desjardins in Vancouver, and even Barry Trotz in Washington D.C., what Alain Vigneault has done this season with the Rangers is truly remarkable.

Coming into the season, the Rangers were dealing with some key losses in free agency, most notable Brian Boyle, Benoit Pouliot and Anton Stralman. Brad Richards, the number two center and power play quarter back last season, had his contract bought out. The Rangers entered the season with a weaker roster as a result, and not much wiggle room due to the cap space.

Before the season began, Derek Stepan broke his leg in a preseason drill, forcing him to miss the first 12 games of the season, and forcing Vigneault to use Martin St. Louis as a center. 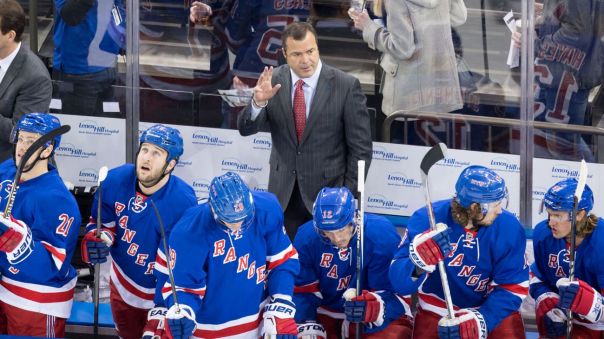 After the first game of the season, Alain Vigneault was already dealing with the loss of two key players in Dan Boyle and Derek Stepan. Photo courtesy of MSG Photos.

But the adversity began from game one. Dan Boyle, one of the Rangers key offseason signings and the man expected to run the power play, broke his hand in the season opener against the St. Louis Blues. In came Matt Hunwick, an offseason acquisition who was expected to be the seventh defenseman.

The injuries on the back end kept coming as the season progressed. On November 1st, Ryan McDonagh re-injured his shoulder, missing nearly a month of action as a result. Kevin Klein was also injured for a game, forcing the Rangers to play with two AHL defensemen.

The Rangers limped through the first two months of the season, sitting at an 11-10-4 record in early December. They were struggling with injuries, blown leads, and growing pains with some new players, including rookies. But everything changed on December 8th in a game against the Penguins.

The Rangers had a 3-1 lead late in the third period, but surrendered two late goals, sending the game into overtime. Kevin Klein would score the game winner in overtime, in what would become the first of an eight game win streak, and a streak of 13 wins in 14 games. 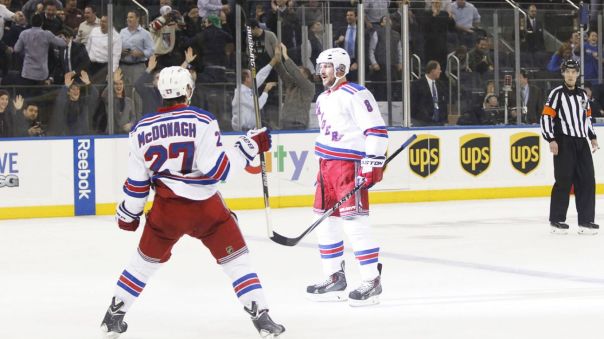 After Kevin Klein scored the game winner against the Penguins on December 8th, the Rangers began their climb to the top of the standings, a phenomenal streak that still has not ended. Photo courtesy of MSG Photos.

Since that game, New York has easily been the best team in the NHL, with a record of 39-11-3 since early December. They’ve strung together numerous win streaks, and rarely lost more than two games in a row. It’s remarkable the consistency that has been established, as the Rangers continue to win while teams like the Islanders and the Penguins have started to unravel.

But New York could have easily collapsed themselves when yet another key player was injured. Henrik Lundqvist took a puck to the throat on January 31st, and after starting the next game, the team learned that he would miss significant time with a vascular injury.

Lundqvist was out for seven weeks, a total of 25 games, but the Rangers continued to win. Cam Talbot stepped in and was absolutely fantastic, continuing the team’s sustained success. Vigneault even got the team to play better, increasing their offensive production as well as finding defensive pairs that worked very well. Without Lundqvist, the team became a more well-rounded, compensating for the lack of an elite net-minder like Lundqvist.

Now that Henrik has returned, the Rangers are back in shape, winning their last three games as Henrik Lundqvist gets back into his top form.

The biggest thing that Vigneault has contributed is the development of young players. Under John Tortorella in an offensively suppressed system, young players were sheltered, given no real opportunities to develop. Chris Kreider was playing in Hartford, and Mats Zuccarello was playing less than 10 minutes a game. 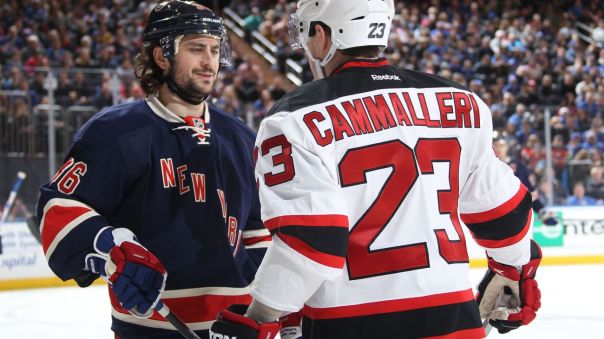 Under Alain Vigneault, Mats Zuccarello has become one of the Rangers best players, impacting the game every night. Photo courtesy of MSG Photos.

Both of those guys are now key performers over the last two seasons. Kreider has set career highs in goals and assists this season, with 44 points (21-23-44) this season. Mats Zuccarello has developed into one of the best passers on the team, playing on the top line, and creating plays every time he touches the puck.

Kevin Hayes, Jesper Fast, and JT Miller have also grown into important depth players on the roster. Fast is a fantastic defensive player, solidifying the penalty kill and becoming an important fourth liner. JT Miller has grown into a solid two way player who can use his size to control possession, and chip in with some offensive production.

Perhaps Kevin Hayes is the best example of what Vigneault’s guidance has done. Coming to the Rangers out of Boston College as a free agent signing, Hayes has become one of the most promising players on the Rangers roster, and filling the third line center role New York desperately needed. Hayes didn’t play center in college, and after a few months of working on his defensive play and his play without the puck, Hayes has blossomed into one of the most talented players on the team, with 39 points (15-24-39) in his rookie campaign.

But it’s not only the rookies that have developed, Vigneault has helped guys like Derick Brassard and Kevin Klein reach their potential. He tends to get the most out of his players, instilling a lot of trust in his players, and balancing defense with a strong, and quick offensive game play. It has worked for the Rangers, and helps the team get production from the top line guys like Rick Nash (42-27-69) and fourth liners like Dominic Moore (9-15-24). 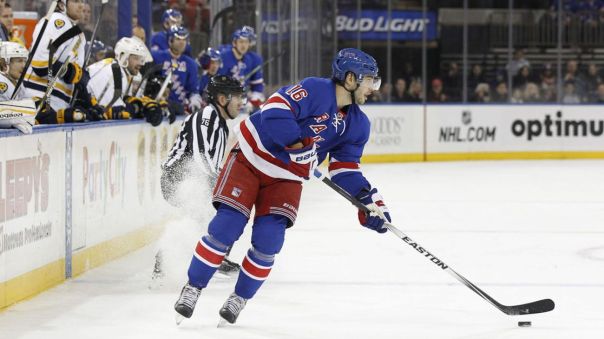 Vigneault has also helped to mold Derick Brassard into the Rangers number one center, either tying or setting career highs in goals (18), assists (41), and points (59). Photo courtesy of MSG Photos.

Vigneault is only the fourth coach in franchise history to reach the 50 win mark in a season, and he’s the only coach in the NHL with three 50 win seasons since the start of the 2010-11 season.

Vigneault has found a system that works with his players, and is being rewarded with a fantastic season for the Rangers. The players all respect and trust him, completely buying into his style of play and utilizing their speed and skill to develop into one of the most competitive teams in hockey. Vigneault has also found ways to develop guys like Kevin Hayes and Derick Brassard, as well as others into key performers for years to come. And he’s been able to overcome all of the injuries and adversity, piloting the Rangers to a wildly successful season.

And that is why Alain Vigneault deserves to take home the Jack Adams Award for the NHL’s coach of the year.