← Rangers aim to close out Round 1 at MSG; No lineup changes for the Rangers
Capitals vs. Islanders: Who would you rather face? → 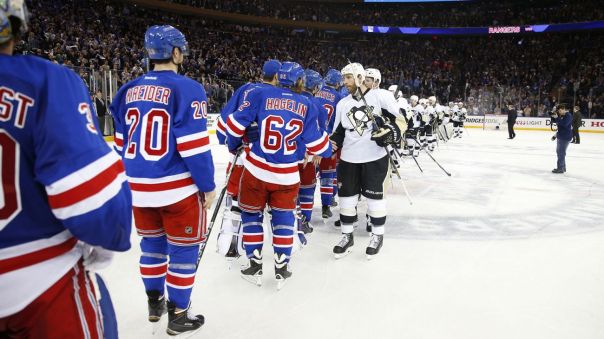 In front of a raucous crowd at Madison Square Garden, Carl Hagelin’s wrist shot sent the fans into a frenzy, and sent the New York Rangers to the second round of the 2015 playoffs. For the second consecutive year, the Rangers eliminated the Pittsburgh Penguins from the playoffs, this time doing it in just five games.

The Rangers haven’t really been able to close out series quickly in recent memory, so this gives some of the players who are banged up extra time to rest. The last time the Rangers won a series in less than six games was back in 2008, when they beat the New Jersey Devils in five games.

Every game in the series has been a one goal game, and all four Rangers’ wins were 2-1 victories. The Rangers became just the second team in NHL history to win a playoff series without scoring three goals in any of the wins, and the first team in the 2000’s to do so.

Like every game in this series, the intensity was through the roof, with the Penguins laying everything on the line. New York certainly controlled the first 20 minutes of the game, but the Penguins made a huge push in the final two periods, outshooting New York by a 27-19 margin, and managing to sneak one past Henrik Lundqvist.

In overtime, with some hard work along the boards, the Rangers secured their second straight overtime victory on a Carl Hagelin wrist shot at 10:52 of the first overtime period. Hagelin’s overtime winner was the first series clinching overtime goal for the Rangers’ since the famous Stephane Matteau double overtime goal in Game 7 of the 1994 Eastern Conference Finals. 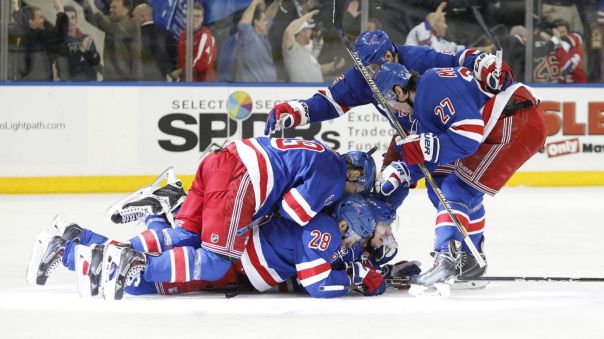 Carl Hagelin’s goal at 10:52 of the first overtime period was the first series clinching overtime winner at Madison Square Garden since 1994. Photo courtesy of MSG Photos.

“I can’t describe the feeling, just an unbelievable feeling,” Hagelin said in the locker room following his game winning goal. “I was laying on the ice, the crowd got louder and louder. I got goosebumps. I had Dom yelling in my ear. It’s one of the best feelings ever.”

Goaltending and defense has been the name of the game in this series, and it certainly was again tonight. Game 5 provided probably the best battle between Henrik Lundqvist and Mars-Andre Fleury in this series, with both netminders making some fantastic saves to keep the game close.

As a Rangers fan, you really gotta tip your hat to Fleury for a fantastic performance throughout this series. Perhaps one of the most criticized playoff goaltenders in the NHL, Fleury was amazing throughout the series. He was really the reason Pittsburgh was able to hang around in games, and the reason why they were all so close.

Henrik Lundqvist has been otherworldly in this series. In five games, Henrik has allowed only eight goals in the five games against the Penguins, and just one goal in all four of the Rangers wins. Some of the saves he made tonight were truly outstanding, outdueling his counterpart in Marc-Andre Fleury.

Henrik Lundqvist capped off a superb first round with a 37 save performance, allowing just one goal for the fourth game against the Penguins. Photo courtesy of MSG Photos.

Lundqvist finished the series allowing just eight goals in the five games, with a 4-1 record, a 1.53 GAA and a .939 save percentage. Steve Valiquette, MSG analyst, pointed out that through the five games, Lundqvist was 75 for 75 on clean shots. That means no screens, deflections or things like that. If he can see it, he can stop it, and stopping all 75 clean shots in the series is very impressive. Lundqvist’s performance in these five games was a difference maker, and he’s been absolutely fantastic.

The game started out well for the Rangers, applying their forechecking pressure early, which eventually led to Nick Spaling taking a tripping penalty just 4:11 into the opening period. New York has struggled on the power play this season, but they managed to open the game with a power play goal, scoring just 12 seconds after the penalty.

After Derick Brassard won the faceoff back, Dan Boyle’s shot hit Fleury up high, and he was unable to control the rebound. Derek Stepan was in front of the net, and make a nifty play to kick the puck to his stick and slide it past Fluery for an early Rangers lead. The goal was Stepan’s second of the playoffs.

Derek Stepan opened the scoring on the power play just over four minutes into the first period. It was his second goal of the series. Photo courtesy of MSG Photos.

Shortly after that, Mats Zuccarello was seen holding his face and skating towards the bench, appearing to be a bit woozy. Zuccarello left the game as a result of getting hit in the face by Ryan McDonagh’s snap shot. Vigneault said afterwards that he thinks he is okay, but there was no other updates on the situation.

The Rangers had a few other chances, but Fleury was stellar here. His best save of the period, perhaps of the night, was a fantastic sprawling glove save on a JT Miller deflection that seemed like it was going in for sure, but Fleury stopped it. New York outshot the Penguins 12-6 in this period.

The second period was more even, with the Penguins beginning to play with some desperation. Both teams had their chances, but Pittsburgh was the only team to score in this period. Sidney Crosby sent a shot on net that deflected off of Nick Spaling’s arm ant past Lundqvist. It looked like Spaling was on top of Lundqvist, preventing him from making a save, but the call on the ice stood.

The third period was a bit scary for Rangers fans, as the Penguins really pinned New York back in their own zone for long stretches. The Rangers went 14 minutes without a shot on goal stretching from the end of the second period and into the third period.

Crosby came close to giving his team the lead, ringing a one-timer off the post. JT Miller did the same with a wrist shot of his own, nearly beating Fleury but getting denier by the crossbar. Both goalies made some good saves, and the game was headed into overtime.

With less than 10 minutes remaining, the Rangers were working the puck along the boards in Pittsburgh’s zone. Dominic Moore made a great play to get the puck over to Carl Hagelin, who skated in front of the net, found some open ice, and fired a wrist shot short side to beat Fleury, send the Blueshirt faithful into a frenzy, and send the Rangers on to the second round.

Carl Hagelin’s wrist shot beat Fleury on the short side, sending the Rangers to the second round of the playoffs. Photo courtesy of MSG Photos.

Ryan McDonagh said afterwards that this was the first time in his career that the Rangers have finished a series in five games. For teams with aspirations of winning a Stanley Cup, having that killer instinct and closing out series as quick as possible is extremely important. Not only does it show that the Rangers know how to close out a series against a desperate team, it allows guys like Kevin Klein and Mats Zuccarello to get some rest.

When asked about performing better in the playoffs, Carl Hagelin said that the postseason gives him an extra gear. Being good friends with Mats Zuccarello, he said afterwards that he wanted to win for Zukes. The unity and comradeship in the locker room is a big reason for their success.

I was actually lucky enough to be at this game, and the environment at the Garden during a playoff game is fantastic. From before puck drop, the Blueshirt faithful were loud and proud, exploding when Stepan scored the first goal. The game was very intense, and when Hagelin scored the overtime winner, that may have been the loudest I have heard MSG in person. If you get the opportunity to go to a playoff game at Madison Square Garden, do yourself a favor and go.

The Rangers will have a few days off before facing the winner of the Washington Capitals and New York Islanders series. The Islanders are currently down in the series 3-2, with game six on Saturday at 3 PM at Nassau Coliseum. The second round of the playoffs for the Rangers isn’t expected to start until Thursday.

← Rangers aim to close out Round 1 at MSG; No lineup changes for the Rangers
Capitals vs. Islanders: Who would you rather face? →